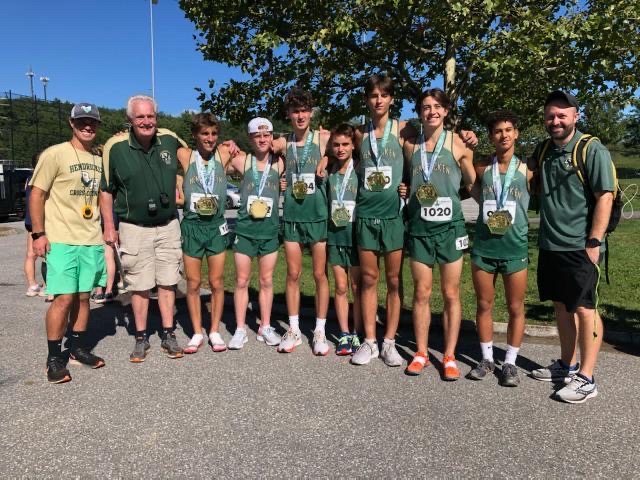 It was business as usual for the Hawks as they made their yearly trip to the Manchester Invitational. 2020 was the first time in forever the Hawks did not run at Derryfield, but they did not miss a beat. Featuring a varsity squad with only three of seven runners who had previously raced the 5k course in 2019; they looked like seasoned pros as their top two runners, Troy Silvestri and Keegan Tierney, lead the charge. Troy Silvestri ran 16:12 on the course for 5th, and that roughly equates to a 175 speed rating. Keegan was 11th overall with a 16:24 and about 171 on the course. Josh Breard was 17th at 16:40 and had a 166 speed rating. Rounding out the top 5 for the Hawks was Evan McGregor in 16:55 and Wilson Jablonski in 17:06. Making his return from injury, Andrew Frezza ran 17:57, and will hopefully soon be back to his old self. The Hawks took the Large School Team Title with a 96-104 win over U-32 of Vermont. The race was won by Samuel Burgess of Framingham in 15:39.

The JV Boys race saw more of the same as the Hawks were led by Sophomore William Olsen in 17:20 as the Hawks won a nailbiter against William Hall 37-38. The Hawks put 5 in the top 15 as well as secured two of the top three spots. In the Freshmen race, Ollie Ide and Jack Moretta went 2-3 as the Hendricken freshman completed the trifecta and sweep at Derryfield with a 51-71 win over Nashua South. The race was won by Noah Guarrera of Bishop Guertin in 11:35. Bishop Hendricken looked very strong and will be looking to carry this momentum to Cary, North Carolina as they will face off against some of the top teams in the region as well as Rhode Island rivals La Salle Academy.

The Ocean State Invitational did not disappoint as Rhode Island runners performed at or above expectations. The championship boy's race saw Classical's Cooper Michaud run the fastest Rhode Island time of the day after doing the same earlier this month at Injury Fund. His 15:57.74 was good for 9th place and a 177 speed rating. Right behind Coop, East Greenwich's duo of Nick Martin and Jacob Connolly ran 16:01 and 16:21 respectively which were 175 and 169 speed ratings on the day. In between the duo from EG was Jackson Borge of North Kingstown who lowered his PR to 16:03 and clocked a 175 speed rating. Teammate Jake Sullivan of NK ran one of the fastest times of the day by an RI runner with a 16:29 and a 166 speed rating. North Kingstown placed 3rd overall in the Championship race as St. John's Prep won. The race was won by Gavin Sherry of Conard in a meet record 14:58.57. The Stanford commit won by a large margin over Gitch Hayes of the La Salle Institute of New York in 15:14. Gavin's brother, Callum Sherry, was 3rd overall in 15:14 as well. Girls Team Title Is Heating Up

In the Girl's Championship race, it was dominated by Rhode Island runners as they took 5 of the top 6 spots. Leading the way, per usual, was Reese Fahy in a blazing 17:38 and a 143 speed rating. This is one of the fastest speed ratings in the country this year. Behind her was Sophia Gorriaran in 18:45 and a 121 speed rating. Rounding out the top 5 was Reese's teammate Rylee Shunney, Rory Sullivan of NK, and Mary Kate Cestaro of Niskayuna. In the team title, North Kingstown upset East Greenwich 42-48 by putting 5 in the top 15 overall. Rory's sister Molly Sullivan placed 6th while Ruby Nunnery placed 11th overall. The team title for the girls is beginning to heat up as both teams vie for the State title.

The Next Great Saint's Runner

When one mentions Saint Raphael's Academy, who comes to mind? Is it state record holder Darius Kipyego or Coach Chris Magill? Darius's brother, Devan Kipyego, is currently throwing his name in as he continues his dominance this season. Devan remains undefeated after running 15:57.83. That is only .09 seconds off of Cooper's mark in the championship race. Devan also ran a 177 speed rating. This is Devan's 3rd major win in a row after winning his Injury Fund Race, and edging out La Salle's Adam Thibodeau at a Dual Meet earlier this year. Devan was only one second off of his brother's all-time 5k PR of 15:56.43. With a lot of the season ahead of Devan, there is a chance he may be able to beat that time. Devan led his teammates Pedro Mayol and Jack Pereira to a 3rd place team finish in the D1 race. In the D2 boy's race, Holden Vaughn of Barrington won in 16:29. The East Greenwich Girls won the JV D1 Race with 6 in the top 9. Sam Henderson of Cumberland placed 2nd in the Freshmen Boys D2 4k in 14:25. Maddison Dutra of Cranston East High School placed second in the Freshmen Girls D2 in 16:28.

Coming Up This Week

This week, La Salle Academy, Bishop Hendricken, and East Greenwich will compete at Great American in Cary, North Carolina for the team title. This will be the first head-to-head for La Salle and Hendricken this fall. Individuals like Reese Fahy and Cooper Michaud will test their strength against the best of the nation as well. It will be an exciting week as Rhode Island's best face some of the best teams and individuals in the country.