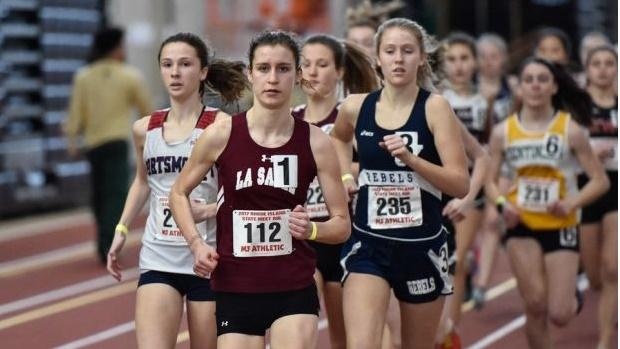 It was La Salle's day at the Rhode Island State Championships!

The Rams put on a dominant display on both the boys' and girls' side, sweeping the team titles at Saturday's meet, held at the Providence Career and Technical Academy.

The victory in the boys' competition, where the Rams defeated second-place and defending titlist Bishop Hendricken,70-56, proved to be the most impressive. The Rams were among the contenders for the crown, along with Classical and the favored Hawks. For La Salle to pull out the victory, its' fourth in the last five years, everything needed to work out as planned.

For head coach Vin McGinn and Co., it couldn't have worked out any better. The Rams scored eight or more points in four different events, and appeared to have everyone with a maroon and white singlet clicking at the right time.

"This is really one of the most exceptional teams that all of us have had," McGinn said. "What distinguishes that is that they have been confident all season, not over confident, just confident in their ability."

Sophomore Max DiMuccio collected 18 points for La Salle with a pair of fourth-place finishes in the 1,500- and 1,000-meter runs and a big victory in the 3,000m. In the 3K, DiMuccio was able to break away from the pack with 400m remaining to win with a time of 8 minutes, 53.68 seconds. The Ram all-stater ran neck-and-neck with Hendricken's Jack McMahon in the early stages of the 15-lapper and it appeared it might be a repeat of the Class A Championships where DiMuccio just edged his rival at the finish. But in the final few laps of the race, McMahon started to drop off and the St. Raphael tandem of Reilly Johnston and Nasavell Medeiros started to push the front-running DiMuccio. The Ram standout was finally able to break his rivals with a blistering final lap. He clocked 4:11.1 in his 1,500m race and 2:40.71 in the 1,000m.

The Rams' Joseph dos Reis turned a tactical race in the 1,500m into an all-out sprint for the title with Classical's Conor Murphy. The two runners were among a crowded lead pack that included Hendricken's David Delbonis, DiMuccio and Chariho's Tim Champlin. The quintet went through the 800m split at just over 2:15. With a few different runners sharing the lead, the pace started to quicken at that point, and with a little more than a lap remaining, Murphy broke free with a strong surge, one he was able to carry to the final turn where dos Reis was able to catch his rival and blast to the finish line. Dos Reis clocked 4:07.23 to Murphy's 4:07.90 effort. Delbonis took third at 4:08.03. DiMuccio was fourth (4:11.1) and Champlin was fifth (4:11.82). Dos Reis also took runner-up honors to individual winner Nikolas Reygadas in the 1,000m. Reygadas won with a time of 2:35.0, while dos Reis was timed in 2:38.63.

La Salle earned its other victory from Cameron Croce in the shot put. Croce, the No. 2 seed, improved on his PB by three feet with a winning heave of 54 feet, 3.75 inches. Finishing second was Lincoln's Garrett Doyle with a distance of 53-1.25.

Cumberland's Chris Choquette defended his title in the 55m hurdles with a winning time of 7.68. Jehlani Gallaway of Classical, who was battling a sickness leading up to the meet and was unsure of he would be able to compete, was able to capture the 300m crown with a 36.41 clocking. Galloway also finished second to Mount Pleasant's Abraham Tambah in the 55m dash. Tambah was timed in 6.54, while Galloway clocked 6.57.

Cebastian Gentil, who a few weeks ago set the state record for 600m, won his specialty for the second straight year with a time of 1:21.64. Gentil took command from the start and was already a good 20 meters ahead of his closest rival as he passed through his opening 400m in 53 seconds. La Salle's Max Gorriaran, a No. 5 seed, secured second with a PR of 1:24.37. Freshman Darius Kipyego of St. Raphael Academy, who won his unseeded heat, placed third overall in 1:24.49, a nearly two-second best.

By the narrowest of margins, Classical's Jacob Furland was able to earn gold in the 25-pound weight throw, defeating top-seed Garrett Doyle of Lincoln was a PB of 69-9.25. Doyle was second with a distance of 69-6.25.

Central's Gus Karweh was able to hold off Woonsocket's Jon Upshur with a leap of 6-6. Upshur improved on his best by two inches with a 6-4 effort for second. Junior teammate Nicholas Iarussi was third with a height of 6-2.

Business as usual for Lady Rams

Westerly's Randi Burr, a consistent top finishers at the state level', earned her first individual title in an exciting down-to-the-wire battle with La Salle's Kane. Burr then did it again in the 1K where she broke the tape with a first-place time of 3:00.07. Burr also anchored her school's first-place 4x800m squad that was timed in 9:51.72.

Portsmouth Nikki Merrill added two more state titles to her resume. Meriill took the 3K with a PB of 10:02.41. She came back shortly after to claim her second straight 600m crown with a time of 1:37.37. Bay View's Aliya Barrows of Bay View Academy was second in 1:38.56.

North Kingstown's Tereza Bolibruch made it three straight in the 55m hurdles. Bolibruch nearly matched her PR by winning with a time of 8.41. At last year's New England Championship, the NK senior was timed in 8.42.

The Prout School's Sarah Mitchell won the shot put with a PR toss of 39.4. Taking the weight throw for the second straight year was recent state record-holder Gianna Rao of Ponaganset with a toss of 58-5.25.