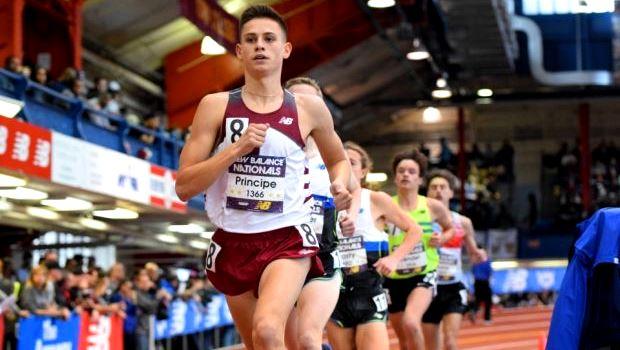 Judging by the returning runners from 2016 and what we saw this past indoor season, the spring campaign has the potential to create quite a bit of national-caliber performances; not to mention a few record-breakers.

The recipient of those possible record-breakers, of course, is DJ Principe. Based on what he's done the last few months during a memorable indoor season, the La Salle senior has potential to wipe away multiple state marks in events ranging from the 800 meters to the 5K.

But it's not all about the Ram runner this spring. The Ocean State should have several more that could make an impact and push the pace up front.

In the 800m last year, we saw 10 returnees break two minutes, including a 1:55.20 effort from then-freshman Sam Toolin, which was a nation best for ninth-graders. The North Kingstown sophomore dealt with some iron-deficiency issues at the end of cross country season and part of the indoor season. Despite running some strong times in events ranging from 600m to the mile, he hasn't quite shown the spark that he had as a frosh. If he can regain his old form, he has to be considered a contender in this event based on what he's done in the past. Barrington's Mars Bishop, who had a best of 1:56.40 last year, is also a runner that can get it done. The versatile Bishop recorded bests for 1,000m (2:32.74) and the mile (4:18.07) this indoor season and is never afraid to challenge the leaders whenever he steps on the line. There's also East Greenwich's Cebastain Gentil, who surprised the field by capturing the 600m this winter. He owns a PB of 1:57.0 for the two-lapper. North Providence's Nathan Coogan can also contend up front. Coogan was fourth at last year's state meet and ran a PB of 1:56.41 to finish sixth at the Eastern States Championship in late February. East Greenwich's Colin Cianciolo (1:57.20)  and Quentin Viera (1:57.60) are also sub two-minute runners. But the person to chase in this event, depending if he runs it or not, is Principe. The Rams' distance ace demonstrated his speed for the shorter event this winter by winning the 1,000m at the Dartmouth Relays where he clocked a state record of 2:27.86. In that same meet, he also ran a 1:53 leg as part of his team's 4x800m squad. If he triples, like he did successfully in the indoor states with the 1K, 1,500m and 3K, you would have to believe that the Stanford commit is the favorite. And if Principe focuses on this event at a meet during the season, he's a longshot at knocking off the 44-year-old state record of 1:51.4 by former Rogers great, Phil "Tiny" Kane. That's a time that was converted from the 1:52.0 clocking that Kane ran for 880 yards at the Eastern States Championship.

Principe is also the No. 1 runner in the 1,500m and 3,000m, two more events that a state record would appear to be in jeopardy. Just as he did during the indoor season, Principe will make one or more attempts at breaking four minutes for the mile, a time he came less than a second from accomplishing when he set the indoor state mark of 4:00.97 at the New Balance Games in late January. If he can do that, or match what he did at New Balance, former Westerly standout Andrew Springer's 4:02.70 clocking from the Midwest Distance Gala in 2009 could become extinct. Principe's chief RI rivals are again Toolin (3:54.20) and Bishop (4:02.93). You have to figure that La Salle's Joseph dor Reis could figure in the mix, too. He was third at the State Meet and ran a best of 4:19.04 for the mile at the New England meet. Other runners capable of earning a spot on the podium are Smithfield's John Pagliaro (4:06.5), East Greenwich's Henry Perretta (4:07.7), Hendricken's Jordan Dagrin (4:08.9), Westerly's Matt Walker (4:10.0) and Cumberland's Ben Drezek (4:07.3).

The 3K (8:21.1) and two mile (8:53.94) state records by his former La Salle teammate and current Georgetown freshman Matt Bouthillette from the Brooks PR Invitational last June, should be two more that Principe can add to his long list, especially after his outstanding third-place showing at the recent New Balance Nationals where he clocked 8:47.40 for two miles. The Clippers' Drezek (8:51.92) and the Bulldogs' Walker, who ran a best of 8:44.64 at the Yale Track Classic, were 2-3 finishers at the indoor states. They should once again battle for those top positions. Other possible contenders include East Greenwich's Jackson Cronin (8:55.5) and Hendricken's Jeff Venter (8:55.5) and La Salle's Max DiMuccio (8:55.2).