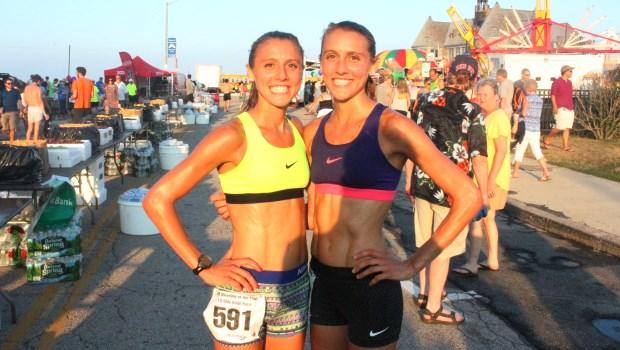 Former Cranston West stars Ali and MIchaela Hackett were 1-2 in the women's race.

Another Blessing of the Fleet 10-miler. Another victory for Matt Pelletier.

The former Warwick Vets runner captured his third straight title and seventh overall on Friday with a winning time of 50 minutes, 32 seconds. Pelletier turned the popular Narragansett race into a solo effort after a mile and a half, breaking away from a pack of four other runners and never looking back. Former Providence College teammates Shane Quinn and Liam Hillery were second and third, respectively, with times of 51:43 and 51:45.

In the women's division, twin sisters and former Cranston West standouts Allie and Michaela Hackett claimed the top two spots. Allie was timed in a crisp 57:56 for 14th overall. Michaela also dipped under a minute, placing 28th at 59:45.

The race had nearly 3,000 finishers. Among the participants was the father-son duo of David and DJ Principe. The La Salle Academy All-American paced his dad in the 10-mile race.  Both finished together with DJ timed in 1:02:35 and David at 1:02:36.