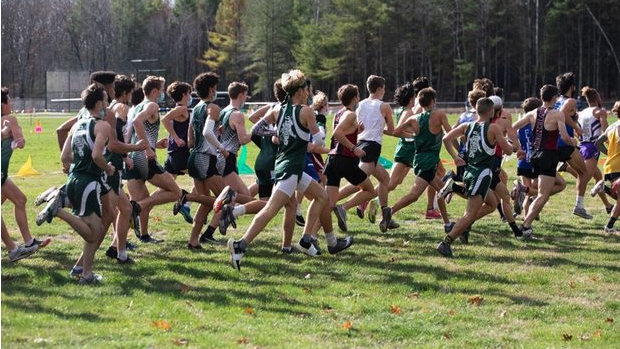 Manchester Invitational is Bishop Hendricken's first real test each year. They have run this course under Coach Doyle a million times, and have more often than not swept the Freshmen, JV, and Varsity races. This year they may not have swept the titles, but they did take home the varsity team title over in-state rivals La Salle Academy and Cumberland. On the girls' side, Cummings dominated the varsity race and looks likely to be in the running for a podium finish at states.

In the girls' varsity race, Caroline Cummings of La Salle solo'd from start to finish opening with a 5:52 first mile before splitting 12:38 at 2 miles. She closed it down with a final time of 18:59 and a 120-speed rating, the best in Rhode Island so far this year. Teammate Mia Bettez took 12th in 20:00 flat. The La Salle girls' team was not at full strength but still managed a 7th-place finish as a team. In the freshmen girls' race, La Salle had the strongest team sweeping with a perfect 15 points.

On the boys' side, Vernon Marshall of La Salle continues to dominate the competition with an 11:24 for the 2.1-mile distance. He beat Hendricken's Jacob Silva for 2nd overall in 11:41. La Salle's Jayce Bessette also placed 19th overall. In JV, Will Olsen of Hendricken dominated with a 149-speed rating and a 17:26 final time. Along with teammate Sam Zaboo's 17:52, Hendricken took runner-up honors in the JV race.

In the varsity race, Aidan Cox of Coe-Brown took the race out hot just as he did when he broke the course record last year. In the chase pack were Hendricken's Troy Silvestri and Andrew Frezza. Silvestri never took his foot off the gas, eventually separating himself to take 2nd overall. He ran a 179-speed rating to place 2nd in 15:57. Close behind in 8th was Keegan Tierney with a 172-speed rating and 16:19. Cole McCue of Cumberland and Phillip Simas Jr. of La Salle also finished in the top 20 with final times of 16:34 and 16:39 respectively. Hendricken dominated the team title with a 57-second spread and 16:33 average. Cumberland placed 6th overall and La Salle took 8th.

The next big races on the calendar are Great American and Manhattan before Rhode Island teams return home for the postseason.