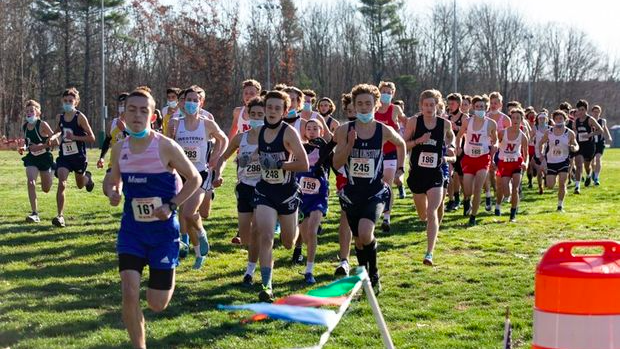 6. Reece Fahys is back

After a brief hiatus due to injury, Reese Fahys is back. The now senior and future PC friar looked right at home as she cruised to a 45+ second margin of victory over Chandaniey Boyce of Saint Raphael's. Her 19:03.87 led the Lady Avengers to the Hindley race team title. Fahys looks to defend her last two cross country state championships, but will still face stiff competition from runners like Sophia Gorriaran of Mose Brown School and Caroline Cummings of La Salle Academy.

La Salle Academy lost 3 of their top 4 from the 2021 season, including both of their all-state runners (Jack Casey and Adam Thibodeau). La Salle returned a solid group of runners in 2022, but the rams pulled a play out of Hendricken's playbook showing great team tactics and pack running in the race named after their coach, Ken Skelly. A brief challenge from Burrillville's Garrett Dailey split the pack up towards the end, but in total, just 5 seconds separated their 1-5 and another 4 back to their 6th man. This was done without Raymond Flores, who could have easily been within this pack. Blake Santos, Phil Simas Jr., and David Parenteau went 1-2-3 and showed the Rams could challenge the defending state champions.

While Devan Kipyego was visiting Iowa State on his first official of the year, a different Saint made their season's debut. This came in the form of Rory Sullivan, former North Kingstown skipper, who took 3rd overall in 20:12.86. The 5th place finisher at last year's state meet is coming off an injury that sidelined her for the majority of the track season. Under the tutelage of SRA and RI Coach of the year Chris Magill, Sullivan has the potential for a breakout season.

While Fahys made her return, she was not the fastest time of the day. That honor belongs to La Salle senior Caroline Cummings. Her 18:31.01 was the only time to crack 19 minutes. Behind Cummings was Maeve Casey in 19:33.65, and 3 more in the top 11. La Salle averaged a 20:44.79 5-man in the Ray Race. East Greenwich, on the other hand, only had Fahys break 20 minutes. However, their 1-5 spread was much better than La Salle's with 6 runners ahead of La Salle's 4. EG's 20:41.77 team average was the best of the day in the Hindley race. Each team had one freshman in the top 10 of the freshmen race and could make the team battle interesting come November.

2. New Freshmen on the scene

Each freshman race was dominated.  On the girls side was Cumberland's Charli McCue taking the win in 16:48.51. McCue, whose older brother also runs for the Clippers, followed in her brother's footsteps in becoming a middle school state champion last fall and continues to dominate now, winning by 30+ seconds. On the boys' side, La Salle Academy seems to have found another star in Marshall Vernon. Vernon won by 18 seconds and could be another important part of La Salle's quest for a team title.

1. Evans, Cummings run the fastest times of the day

The fastest time on the boys' side came from Nathan Evans in 15:57.44. He did this largely solo with a huge margin of victory over Cumberland's Cole McCue, and Sam Kucal. Evans edged out Jackson Borge of North Kingstown who was the only other athlete to dip below 16 with a 15:59.22. Brandon Piedade won the Gourley race in 16:03.00 with a notable absence being Hendricken's Troy Silvestri. On the girl's side, Cummings won in the fastest time of the day. Chariho's Erin vonHousen won the Sullivan race in 19:20.82, and Maddison Dutra of Cranston East won the Caswell in 20:09.71.