The RITCA Last Chance Qualifier serves as the final opportunity to improve your time before the state meet. Many Rhode Island runners improved their state rankings and could prove to be the deciding factor for the team battle. All of the RI rankings will only consider times run at state qualifying meets at the PCTA.

In the Boy's Sprints:

In the 55m Edmund Lok of Hendricken moved up to RI #2 with a 6.60 clocking to win. His time placed him only behind Jared Gibbons at 6.55. Gibbons looks to defend his title from the 2020 indoor season. In the 300m, Jubril Bamgbala of La Salle ran a RI #2 36.89 and Lincoln's Aiden Fletcher ran an RI #5 37.3 to place second. This puts him .2 behind Brandyn Durand of Hendricken who looks to improve on his runner-up finish in 2020. In the 55mh, Ray Marsella moved into RI #2 winning in 7.98. Damon Wilson and Eli Terrell also improved their marks to be ranked 5th and 6th heading into states.

In the Boy's Mid-Distance Events:

In the 600m, Pedro Mayol won in 1:23.22, but La Salle's 2-3 punch of Lachlan Bishop and Raymond Flores showed depth for the Rams in the 600. Flores specifically had a breakout race winning the third section and PR'ing both by 2 seconds. Bishop and Flores are currently ranked second and fourth in the state, and Bishop specifically has a chance to make history as his brother, Mars Bishop, won the same event in 2015. In the 1000m, Will Ballard of South Kingstown moved up to RI #5, but now a total of 13 athletes have broken 2:40. Kaden Kluth of Portsmouth looks to win his third title but will have to face runner-up Carpenter as well as Devan Kipyego who owns the fastest time in RI. 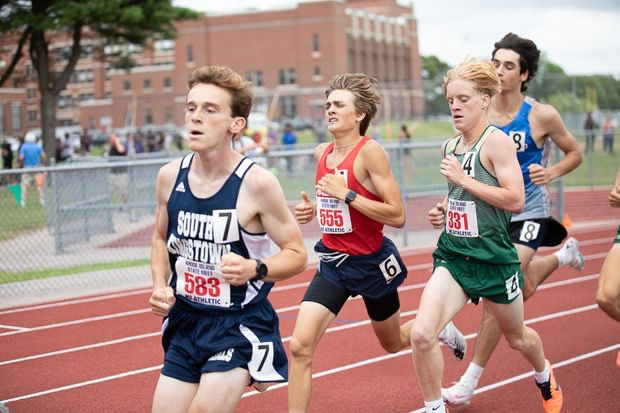 Tony Capalbo, Kaden Kluth, Evan McGregor, and Ethan Carpenter will face off in the 1000m and 1500m this Saturday.

In the Boy's Distance Events:

In the Boy's Relays:

In the 4x200, Bishop Hendricken improves their time to within a second of La Salle's RI #1 mark of 1:32.95. In the 4x400, the top 6 teams in the state were rewritten as Classical ran away from the competition running 3:30. They were followed by Hendricken, Portsmouth, South Kingstown, Cranston West, and Westerly. This knocks out the top 4x400 teams from last year: North Kingstown, La Salle Academy, and Saint Raphael's. In the 4x800, Westerly moved into the top 6 with an 8:30 4x800 for RI #4. Topping the list is La Salle and Hendricken who are seeded within a second of each other.

In the Boy's Field:

In the weight, Andrew Harmon of NK and Christian Toro of Lincoln moved into RI #4 and #5 both with throwers over 20 meters. In the shot put, Alex Morin of Hendricken won and moved into 6th behind his teammates in fourth (Durand), and fifth (Nyannah). No changes occurred in the long jump as Colby Fahrney of Portsmouth jumped over 22 feet to win, and in the high jump, Nick Lamoureux of North Smithfield won with a jump of 6-2 to be ranked RI #3.

In the Girl's Sprints:

In the Girl's Mid-Distance Events: 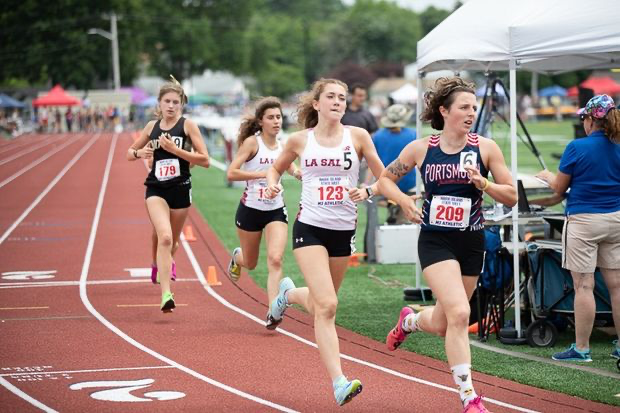 Lily Borin looks to score in the middle distance events to help her team win their 17th consecutive state title.

In the Girl's Distance Events:

In the Girl's Relays:

In the Girl's Field:

In the weight, Jillian Leahy of Lincoln won in 46 feet, 3.25 inches, and Kylee Bennett of Narragansett threw a PR of 44 feet 3 inches to move into RI #4. In the shot put, Aviann Rezendes of Classical threw a new RI #1 of 36 feet 8 inches to win by four feet.  In the high jump, Jordan Roskiewicz of Barrington won in 4 foot 8 inches. In the high jump, Lauren Boyd of Smithfield won, but Sophia Ford of Barrington improved to 16 feet 10.5 inches. Alia Nigri of Cumberland placed 3rd with a 16-foot 3-inch jump which is RI #6.

With the RIIL State Championship meet just a week away, athletes prepare to take home PR's, all-state honors, individual, and team titles. Good luck to all those competing.

Notably absent from Last Chance, Sophia Gorriaran was in Boston during the last chance meet as she was slated to race in the first section of the 800. The junior went out in 59.23 the first 400. She closed in 61.35 to run 2:00.58. This was the US #2 mark all-time only behind Roisin Willis, who won the same race in a high school record 2:00.06. Both times break Sammy Watson's 2:01.78 that has stood since 2017. This was also a U18 record for Gorriaran as she broke further lowered this from 2:02.44 from the American Track League #3 meet. She also runs under the 2:01.5 necessary to qualify for the indoor world championships in Belgrade this March.