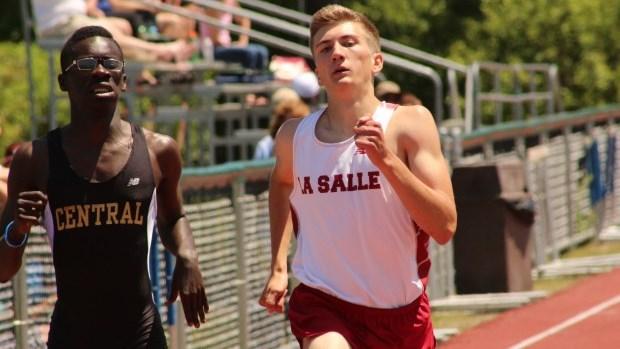 Recognize these names. That's right. They were all part of the Rams’ winning 4xMile Relay at the New Balance National Indoor Championships and, all but D.J., comprised the first-place DMR squad at the Penn Relays Carnival in April. In other words, this is a mega-talented distance core that can do some damage at this weekend's state championship. At the indoor state meet, this quartet scored 65 points in the middle- and long-distance events. Expect similar results on the outdoor surface. Jack is fresh off a spectacular performance in the elite HS mile of the Prefontaine Classic where he ran a two-second best of 4:06.74, a time that ranks No. 5 in the nation. Jack will be defending his crown in the 1,500m and could lead a 1-2-3-4 sweep with Matt, D.J. and Dan following him across the line. The La Salle runners own the four fastest times this season, all with sub four-minute clockings. Jack also should fare well in the 800m where he’s a three seed. He’s capable of winning again or at least securing a runner-up spot. The 3K is another event the Rams can score some high points with D.J. and Matt the top two seeds. Unlike the indoor season where there are fewer events, the Rams will have to show up with their ‘A’ game(and perhaps a little more) to earn an outdoor crown against the level of competition that will be there. If this gifted foursome can perform at their best that could make the difference to a positive outcome.