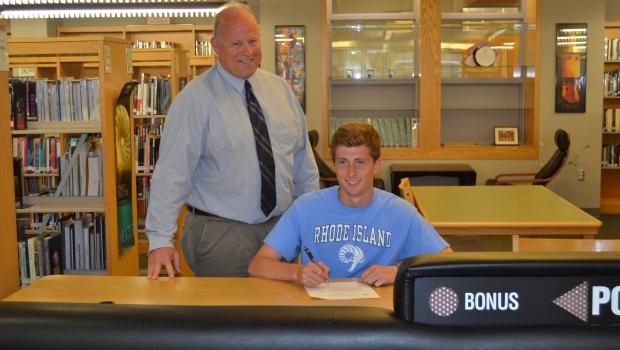 North Kingstown senior Ian Connors signing his letter of intent for URI next fall. The future Ram runner is one of the favorites for Saturday's 800m title at the state meet.

Can North Kingstown win the 800m title for the third straight year? In 2012 and last year, the Skippers’ multiple all-stater and graduate, Zachery Emrich, claimed the crown. Now there’s a chance his former teammate and member of the school’s record-setting 4x800m relay at the 2014 New Balance Nationals, Ian Connors, has a chance to steal the crown. Ian is the top seed for Saturday's meet based on his winning time of 1:57.60 at the Schomp Invitational a few weeks ago. This past weekend, the URI-bound senior was first across the line at the Hendricken Invitational where he ran a tactical race and finished at 2:00.30. Ian will face a tough field that includes La Salle’s Jack Salisbury, who will be well-rested after competing in the 1,500m earlier in the meet. He’ll also have to contend with Mars Bishop of Barrington, the indoor 600m titlist that has run 1:58. Ian will have the freshest legs of the top competitors in the scheduled 5:25 p.m. race. He's also in the 4x800m relay, which kicks off the running events at 2. Look for the NK runner to stick to a strategy of taking the race out hard to hopefully take some of the zip out of the legs of runners like Jack and Mars, who both have displayed strong kicks.