Ponaganset High School's storied covered bridge trail is truly where magic can happen. If you do not believe me, just look at the results of the races this weekend. On the boy's side, a total of seven athletes broke 16:00, and a further 30 broke 17. This is 2 more than in 2020, but only 3 runners broke 16 that year. The state only became deeper with talented runners from across the country. In 2019, the top 10 spots at the state championship were occupied by 3 schools: 6 from La Salle, 3 from Bishop Hendricken, and 1 from Saint Raphael's. In 2021, individuals from seven different school's occupied the top 10. For the girls, five athletes broke 19, similar to 2019 but less than the 7 that did in 2020. Individually, Reese Fahys, Sophia Gorriaran, and Rylee Shunney found themselves at the front. Although, Reese did not mess around and led wire to wire. In the team battles, the girls and boys were separated by a few points on both sides, but at states, two teams asserted themselves as the champions.

The girl's race went off at 2:15, and from the gun, Reese meant business. She opened her lead and pushed the pace alone as no one dared to match this move. She opened a lead and held it for the duration of the race. She clocked a 143-speed rating and a 17:40, 3 seconds faster than her 2020 effort where she ran much of the race with Sophia Gorriaran as well as now Furman freshman Kaylie Armitage. The second, third, and fourth spots were hotly contested. Sophia Gorriran of Mozes was able to pull away on the football field for second in 18:13 and 132-speed rating while Riley Shunney of East Greenwich placed third in 18:17 with a 131-speed rating. Fourth was Caroline Cummings of La Salle who clocked a PR of 18:20 and also ran a 130-speed rating. East Greenwich and La Salle were both vying for the team title and had their low sticks in ahead of North Kingstown. However, the Sullivan sisters were able to follow closely behind in 5th for Rory Sullivan in 18:52, and 7th for Molly Sullivan in 19:17. Between them was Freshman State Champion Kiley Defusco in 19:01. The team battle was close, but Seniors Ruby Nunnery and Tori Chace of North Kingstown finished ahead of East Greenwich's 3 and La Salle's 4. This proved to be the difference even though La Salle's 6 beat North Kingstown's 5. This gave North Kingstown their first girl's team title since 2006, and by just 11 points ahead of defending champions La Salle. In their post-race interview, the team stated that with all the seniors on the team "They were so happy to be able to bring a state title home in their final season of xc." East Greenwich finished a single point behind La Salle and settled for 3rd. At New England's next week these three teams will surely be in another close battle for a coveted podium spot. 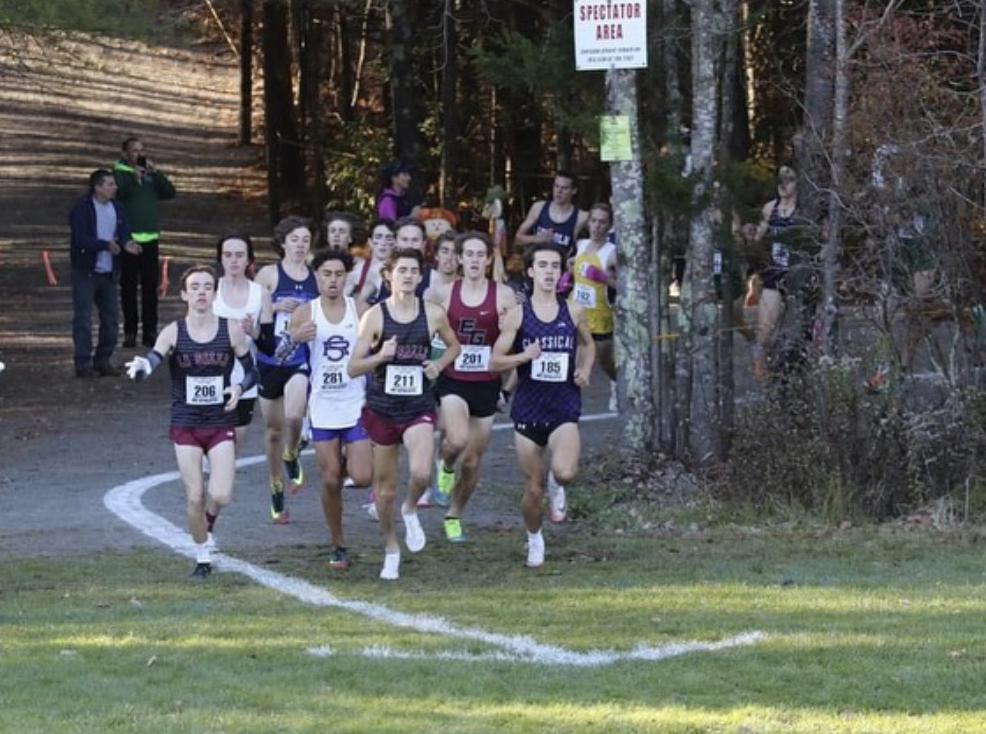 The boy's race went off 45 minutes later at 3:00, and the crowd could tell that there would be no clear-cut winner from the start. La Salle's Adam Thibodeau took the pace out in a 4:54 mile, much faster than in 2020. He was followed by the Class A Champion Jack Casey, Class B Champion Cooper Michaud, and Class C Champion Devan Kipyego. By the hill, at 2.25 miles the three Class champions were still together working up the hill. This is where Devan Kipyego made his move. He created separation and broke the field as he cruised to the win in 15:32, 185-speed rating, and a 9-second margin of victory. In second was Henry Dennen of Cumberland who finished 4th at the Class A Championships the week prior. His 15:41 was a 182-speed rating, and he almost beat the school record of 15:39 held by Trevor Crawley. In his post-race interview, he sat back instead of pushing the pace like at Class A's, and it worked out much better this time around. In 3rd was Cooper Michaud of Classical in 15:42, and 4th was Antonio Capalbo who had a break-out race with a 15:43. Capalbo, the 2020 indoor and outdoor 1500 state champion, missed the championship section of XC in 2020 due to dropping out of the Class Championships. Just one year later he proved that last year was a fluke and broke a 36-year-old school record. Places 2-4 all had speed ratings of 182. In 5th was Jack Casey in 15:52, 6th Nick Mott of Classical in 15:53, and Seventh Troy Silvestri in 15:57 and 179. There were many breakout performances at States, but two of note to highlight were Nick Mott of Classical and Wilson Jablonski of Hendricken. Nick Mott opened his season with a 17:57 which was 21st in his race and ran 16:45 at Great American. At Class, he finished 8th in 16:34, but at states he PR'd by 37 seconds and finished 6th in the state. Over the course of one season, he shaved two minutes and four seconds off his personal best. Wilson Jablonski of Bishop Hendricken had run fast times throughout the year, but at Class A he ran 17:18 to place 20th overall. The next week, he ran a 19 second season's best, and 74 seconds faster than the previous week. Not only that, but Wilson's 10th place finish helped Bishop Hendricken avenge their loss the week prior at Class A. Bishop Hendricken's squad ran together from 2k onwards. As Evan McGregor said in their post-race interview "Troy does his own thing." Their spread could not be overmatched, and they put their top 5 in the top 18, and before La Salle or Cumberland had their third man in. Bishop Hendricken had finally reclaimed the title for the first time since 2018 with 62 points. Cumberland settled for second with 125 points, and La Salle fell to third with 136 points. Both Cumberland and La Salle lost their 3 men to injuries with John Walker running as their 7 after dropping out at Class, and Phil Simas of La Salle falling as 3k and not being able to continue the race. Heading into New England's, Bishop Hendricken will have a target on their back while Devan Kipyego will race some of the best in the country including Connecticut's Gavin and Callum Sherry, Aidan Puffer, and New Hampshire's Aidan Cox.

In 2021, the Girl's XC State Championship may look similar to the top 6 girl's return next year. On the boy's side, the opposite is true, as though State Champion Devan Kipyego returns, of the next 9 runners, only Troy Silvestri will be returning to compete in 2021.