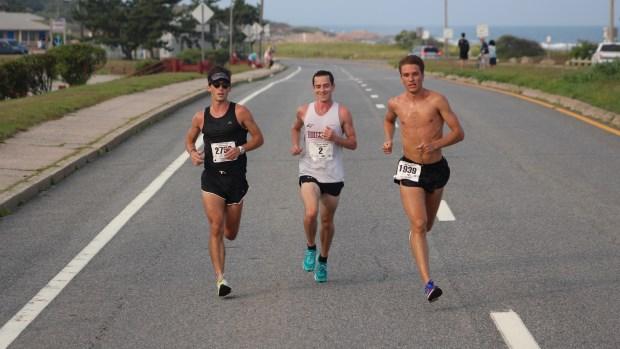 A close race just before five miles turned into a runaway victory for Brian Doyle at the annual Blessing of the Fleet 10-Mile Road Race on Friday. The former Bishop Hendricken and Providence College star broke the tape with a winning time of 50 minutes, 54 seconds.

Connecticut's Annmarie Tuxbury claimed the women's title with a 58:39 clocking. She was 22nd overall in the field of 2,200 participants.

The popular 10-miler, held under humid conditions, quickly turned into a three-person race for the men's crown with Doyle and eventual second- and third-place finishers, Lou Sarafini (52:00) and Ian Stellar (54:50) forging to the front from the beginning and building a sizable gap on the chase pack before reaching the first mile. Stellar did the early pace-setting, taking the trio through an opening mile of 4:46 and two miles at 10:05. The threesome remained intact along Ocean Drive at mile 3 (15:11) and by the fourth mile on Knowles Way. Shortly before making a right-hand turn onto Route 108, Doyle made his first initial surge to break away from the pack. By five miles, he increased his lead to roughly 18 seconds, hitting the halfway mark at 25:38.

From there, it was all about the clock for Doyle, twice a runner-up at Blessing. He cruised through the seven-mile checkpoint at 35:42 and put the race away for good during the next mile, which he covered at 4:46.

"I was felling really good," Doyle said. "I did the Peachtree 10K (in Atlanta on July 4) and felt like I could do six hard miles. The first four (miles) was kind of relaxed and then (the plan was to) go right at four miles. Maybe I went a little early. It was really hot out here, but I felt great out there. The crowd really helps you a lot."

In the women's race, Tuxbury took the patient approach. She kept within close range of the leaders for most of the race and didn't take the lead until around eight miles. Finishing second and 24th overall was defending champion Jeanne Mack in 59:20. Cranston's Allie Hackett, the 2016 winner, was third and 31st overall in 59:51.

The 24-year-old Tuxbury, a former Bryant University runner, recently qualified for the U.S. Olympic Marathon Trials by finishing second overall at the Vermont City Marathon on May 27 in a time of 2:44.17.

"Things have really been coming together the last few years," she said.