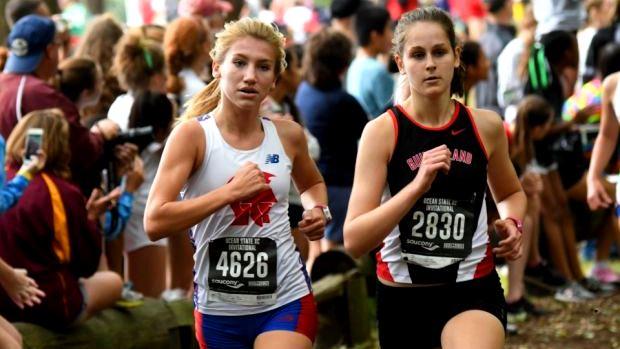 Competing in the Championship race of the Ocean State X-C Invitational on Saturday, Portsmouth teammates Nikki Merrill and Elizabeth Sullivan posted the third and fourth fastest times of the day at Goddard State Memorial Park. The talented tandem secured those positions in the elite race with times of 18 minutes, 31.11 seconds and 18:39.69, respectively. Westerly's Randi Burr was sixth overall in 18:52.01.

Two-time All American Kelsey Chmiel of Saratoga Springs (NY) established a meet record of 17:34.70 to easily win the race. She was followed across the line by fellow New York rival, Katherine Lee of Shoreham Wading River, who was timed in 18:18.44. Saratoga Spring claimed the team title.

In the boys' Championship race, Westerly's Matthew Walker was the top Rhode Island finishers, placing seventh overall with a time of 16:16.64. North Kingstown's Jack Perreault was 39th overall in 17:05.97.

The race for individual honors turned into a dogfight between Tristan Shelgren of St. John Prep (MA) and Mason Gatewood of Saint Anthony's (NY). In a back-and-forth battle until the very end, Shelgren put on a burst with just 50-meters remaining to overtake the front-running Gatewood and capture the title with a time of 15:31.33. Gatewood crossed the line in 15:31.60.  With all five of its scoring runners among the first 30 placements, Wellesley (MA) won the team crown with just 79 points. North Kingstown was 11th overall out of 15 teams with 251 points.

In the other varsity events, William Baginski of Ridgewood (NJ) won the Division 2 Varsity race with a time of 16:27.77 Elsa Neubauer of Brewster (NY) was first for girls, clocking 19:22.46 for the generous 5K layout. Toll Gate's Sophie Maynard was fourth in 19:55.

Elite performances from this session