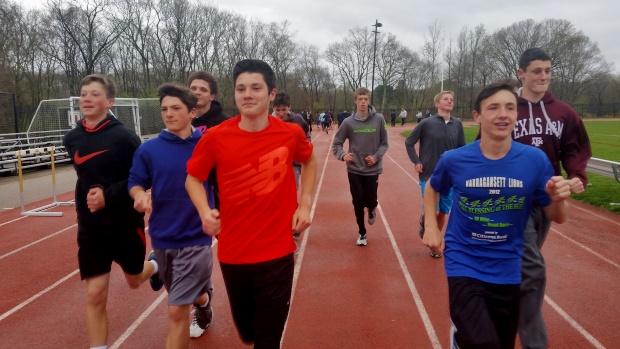 A highly-contested 800-meter race on Monday saw five runners dip under 2 minutes, 3 seconds for the two-lapper.

But the one time that was the most eye-popping of them all was the one posted by the winner.

In a dual meet with East Greenwich and Chariho Regional, freshman Sam Toolin of North Kingstown clocked the nation's fifth fastest time for ninth-graders with an astonishing 1:57.1. He was four seconds ahead of runner-up Cebastion Gentil, a sophomore from East Greenwich, who was timed in a respectable 2:01.1.

"Sam is showing himself to be a great team leader already among his freshmen teammates," said NK volunteer coach Charlie Breagy. "He is a fierce competitor and afraid of no challenges. He is the first to step up and willing to anchor any relay team. He, simply put, loves to race against anyone. The bigger the challenge the more he likes it."

East Greenwich Alex Gannon was third in the race with a time of 2:02.1. Right behind was teammate Quentin Viera at 2:02.3. Another outstanding frosh from North Kingstown and perhaps a future "sub-two" runner this spring, Jack Perreault, was fifth at 2:02.8.

Toolin's effort on Monday is the latest in a long-list of national-caliber performances this year by the NK standout. He was fourth at the state cross-country meet and later placed ninth overall at the Nike Cross Nationals Northeast Regionals in the fall. The Skipper phenom also placed second at the New Balance Nationals' freshman mile this past March where he ran an all-time best of 4:21.94.