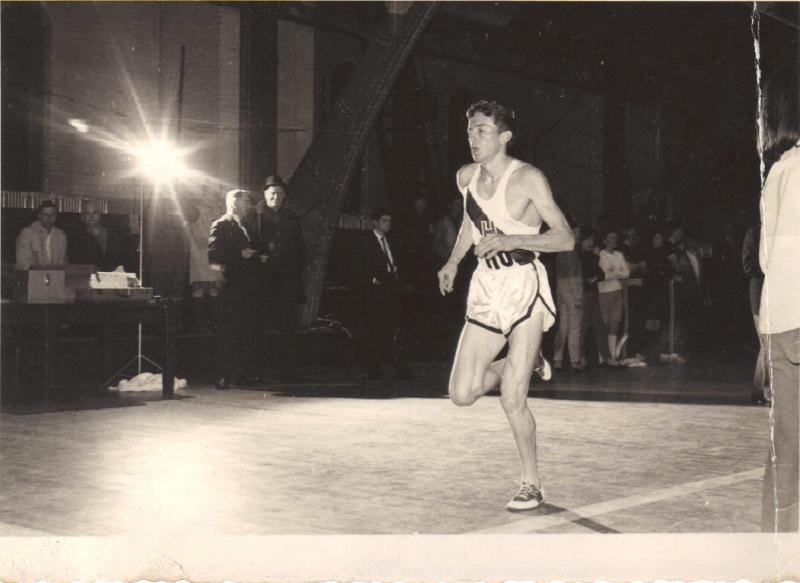 In the 1970s, few could argue the tremendous impact that Steve Prefontaine had on the running community in the United States. The late great distance runner from Oregon held numerous American records and grew a reputation as a tenacious competitor. If you tried to beat him, you often paid the price.

Not too long after Prefontaine made his mark, Rhode Island's version of the legendary "Pre" was tearing up the roads here in our little state with the same reckless abandon. With his wavy red hair and unorthodox running style, Bobby Doyle was the face of dominance in the Ocean State, rarely losing on his home soil. When he took his talents beyond the boundaries, the results were often similar.

It didn't matter the distance - five miles, 10 miles, the marathon - Doyle was usually the one breaking the tape at the finish. There was also no denying that his forte, his bread and butter was the marathon, a grueling 26.2-mile race that requires pure heart, pure guts and a bit of craziness to excel.

Many would say those three traits couldn't have been more accurate when describing the Pawtucket native.

"To us, he was like Steve Prefontaine," said Hollie Walton, former teammate and longtime friend of the late Doyle, who died unexpectedly in 2007 at the age of 58. "Every day was a hard run for Bobby."

In a career that spanned more than four decades, Doyle often made headlines. He was a seven-time winner of the now-defunct Ocean State Marathon, winning his first at the inaugural race in 1976 and his last at the age of 42 in 1990.

He would also earn success at the Boston Marathon, three times placing among the top-12 finishers. In addition, he was a two-time Olympic Marathon Trials qualifier and represented the U.S. at the Pan American Games in 1979. He was also a dominate force on the local road-racing scene and successful high school coach.

Doyle's celebrated running career began his junior year at Hope High under the direction of Coach Ted McLaughlin. It didn't take him long to show his unlimited potential, setting state records in the two-mile run (indoor and outdoor) and earning all-state honors in track and cross country runner his senior year.

Walton was a freshman at Hope during Doyle's final season as a high school runner. It's where he developed a lifelong friendship with a person he considered his mentor during his early years of running. Like his good friend, Walton showed promise right away, running a 4:50 mile in Phys. Ed. class in the ninth grade.

Doyle soon took the young runner under his wings. By his senior year, Walton was a state, New England and Eastern States' champion in the mile with a 4:13 best, a time that ranked No. 3 nationally. He was also the 1968 state cross-country titlist.

Walton realized quickly at Hope that his gifted teammate meant business whenever he trained or raced.

Walton recalls one of the first times he went with Doyle on a distance run, one that began at a grueling pace.

"They had this route they called the Pawtucket Loop where you would go down Hope Street to Blackstone Boulevard in Pawtucket, head to North Main Street and come back up on Hope Street," he said. "I was like no big deal. Bobby and I started running. In my mind, I thought we were getting a ride back (after about three miles). He's talking and I'm trying to run and I'm thinking, 'This guy never shuts up.' We get to the point where I think we're stopping and he does a turn and starts going back. I said, 'Dude, where's the car!' He's like, 'We the car.' He then starts running back. I didn't get back until 15 minutes after he came in. That's when I said to (Coach McLaughlin), 'Don't let me run with that nut again.'"

In different years, Doyle and Walton would both attain All-American status at the University of Texas El Paso. Doyle was a member of the 1969 cross-country team 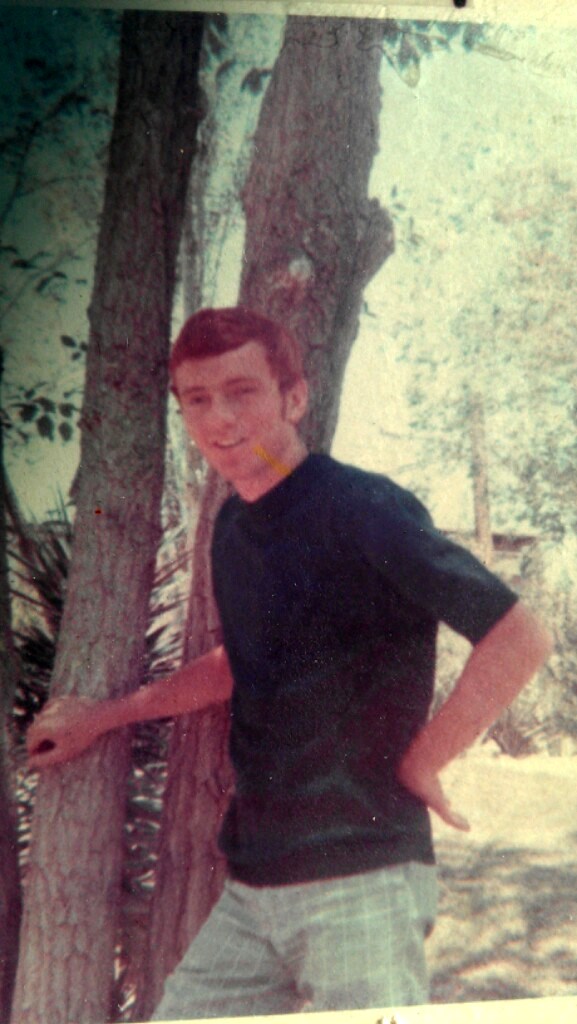 that won the NCAA Division I title. The two runners were later teammates on the old Johnson & Wales Athletic Club (JWAC), a running club formed by Col. John McNulty of the college.

In Massachusetts, the Greater Boston Track Club (GBTC) was considered one of the best in the country during the 1970s with such members as multiple Boston and New York City Marathon champion Bill Rodgers, Bobby Hodge, Randy Thomas and Dick Mahoney. On a somewhat smaller scale, JWAC was similar-type club with a who's who of elite R.I. distance runners comprising the team. Along with Doyle and Walton was two-time Ocean State Marathon (OSM) winner Tom Grundy, Providence College standout Mick Byrne, former OSM champion Roland Davide, Mark Skinkle, Ray Nelson, John Magill, Rick McLaughlin, Tom and Bob Ratcliffe and Ron and Pat Gillooly.

"It was a great team. We had maybe 10 people that ran between 2:14 and 2:25 for the marathon," said Walton, who noted that at one point even Irish Olympian and former PC great John Treacy, a two-time World Cross-Country champion and Olympic Marathon silver medalist, was part of JWAC.

While JWAC had its share of talented runners, Walton considered Doyle the leader of the group. He gave the club its first notoriety when he captured the inaugural Ocean State Marathon, traversing the streets of Newport in 2:20:24. It was a race that featured former Boston Marathon winner and current Runner's World editor Amby Burfoot, who placed third overall. Walton finished 18th in the race at 2:35, his initial time running a marathon.

Brendan Doyle, one of five of the great marathoner's children, heard about his dad's strategy at the '85 race where he utilized the final half of the course to his advantage. After Heartbreak Hill between miles 17-21, the final five miles gradually go down in elevation.

"He was a great downhill runner," Brendan said. "He held back. He was in about 40th at the half-marathon mark and just kept picking runners off the last half of the course."

The young Doyle, an R.I. State Trooper, remembers his dad's later years of running. He was just nine years old when Bobby Doyle won the last of his Ocean State Marathons in 1991.

"I was at the three- or four-mile mark. I was the first one to give him his water," he said. "I remember he was going like 5:20 pace. I had to sprint to catch him."

Walton, a runner who had sub-10 second speed for 100 yards and ran 48 seconds for the 400, dropped his time in the marathon substantially from his inaugural marathon in 1976, running 2:21 for the 26.2-mile distance at Boston and Ocean State. He credits Doyle as a primary reason for his improvement.

Workouts under the late marathoner were often legendary. As Walton would attest, Doyle's success wasn't just from natural ability. 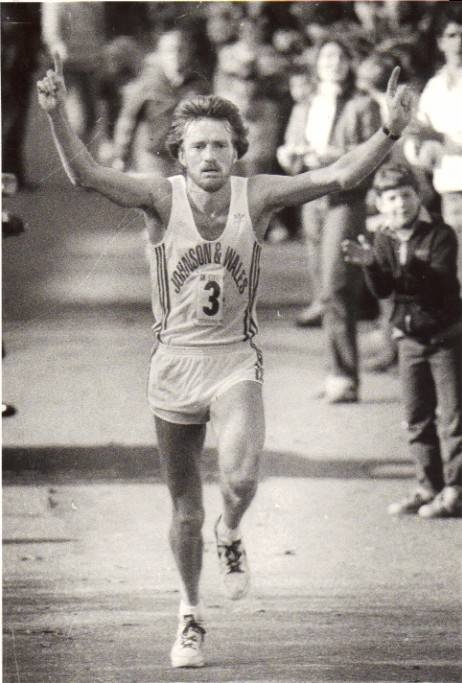 Walton recalled another time doing a 10-mile tempo run with his good friend that was close to 50 minutes. He also remembers some heart-wrenching workouts on Blackstone Boulevard in Providence where the two runners would run 18 miles, alternating hard, easy two-mile repeats with the hard runs at 4:35 to 4:40 pace.

That was just the way it was whenever you trained with Doyle.

Doyle was also a devoted father to four boys and a girl - Patrick, 35, Brendan, 32, Brian, 21, Connor, 19 and MacKenzie, 12. His two oldest sons from his first wife, Maureen, excelled at St. Raphael Academy and later at Providence College and Iona College, respectively. His other two sons from his widow, Lori, were standouts at Bishop Hendricken. Brian currently is a top runner for PC and Connor is competing in his freshman year at UMass-Lowell

All four of Bobby Doyle's sons were coached in high school by the late runner's older brother, Jim, the current coach of Hendricken and former mentor at St. Ray's from the late 1980s and early 1990s. Throughout his tenure, Jim Doyle has produced numerous all-staters and won more than 40 state titles in cross country and track & field. In a story back in 2007 after his brother's passing, he stated how he owed a lot of his coaching success to what he learned from his brother.

Besides his career as a runner, Bobby Doyle also earned success as a coach at La Salle and primarily at Woonsocket where he coached the 1996 squad to a state cross-country title. Doyle was not only a coach and master motivator, but often a training partner with his squad, regularly doing track workouts and long runs with the members of his teams.

"Here's a guy that was about 50, still running quarter repeats in the low 70s and 800 repeats in the mid-to-high 2:20s," said Brendan, who often trained with his dad during high school. "It definitely kept me interested in running. Here's my dad running with us. He would kick our butts."