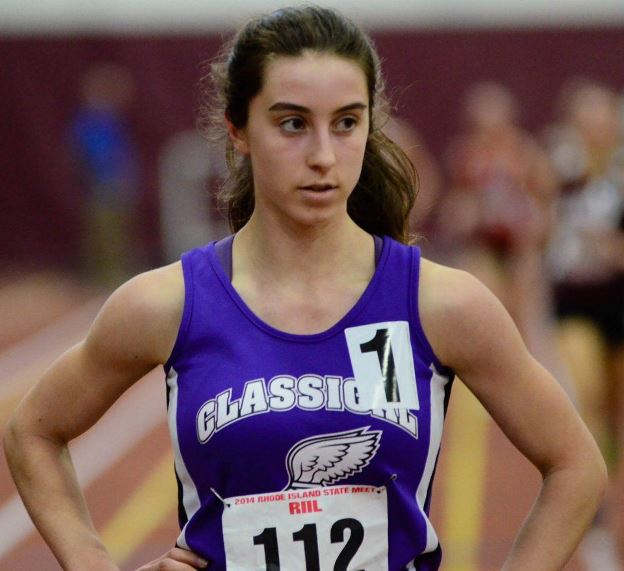 For the next week leading up to the New Balance Nationals, March 14-16, at the Armory in New York City, MileSplit RI will feature a top R.I. athlete who will be making the trip to the Big Apple to compete against the nation’s best.

Below is a Q & A with senior Maddy Berkson of Classical, perhaps one of the greatest middle/long-distance runners to ever come out of the state. Maddy will be competing in the 400 and the 800. She is primarhily focused on the 800, an event the Classical star has a good chance at winning!

Q. First of all, congratulations on another great season. You defended all three of your titles (3K, 1,500, 1K) at the state meet and also won your third straight New England crown on March 1. In addition, you set state records in the mile and the 3,000 this winter. What has been the highlight so far?

Maddy: This year’s state meet was a lot of fun. There were many seniors on the team who I have run with all four years and it was great to see how much we have all improved and gotten to know each other better.  It’s also exciting to see younger members of the team performing well.  As much as I like travelling to different tracks around the country, it’s often by myself, and it’s nice to run with a team.

Q:  After you won the 1,000 at the New England’s, you stated that you’re concentrating on running a fast time and going for the win in the 800 at the nationals. Is that still your primary goal? Who do you look at as your top competition?

Maddy: I am going for a fast time in the 800. My goal is to win, and that will be hard since a great field is signed up this year, including Elise Cranny and Karina Shepard. I’m really excited though, should be a great race as always.

Q: In last year’s race, you took the pace out hard and led for the first 550 meters before settling for a still-outstanding third place and state record of 2:06.67? Was that your pre-race strategy? Any particular strategy for this year?

Maddy: My pre-race plan for big races like this is usually to settle in with the leaders so I can use my kick. In some races, leading feels more comfortable, so that’s what I end up doing.  This year, I’m hoping to be in the mix early and rely on my training to keep me there until the finish.

Q: You have had much success at The Armory, the site of the nationals. What is it about the facility that makes it so special?

Maddy: A lot of things make the Armory a great place for me.  My grandfather lives in Queens, which makes travelling to the Armory more relaxing and easier than if I stayed in a hotel.  The Armory is an appealing venue in part because of the banked track.  One little thing I like about the Armory is the temperature.  It’s usually cold outside and hot inside.  So it’s nice to warm-up in the cold, then come inside and stay warmed-up for a long time until the race.  The sounds are great also; music is usually blasting and Ian Brooks, the British announcer, always makes races more exciting.  It’s just a beautiful building, rich with track history.

Q: What would be the perfect ending to your final season on the indoor surface?

Maddy: Winning the New Balance Indoor Nationals 800 would be amazing.

Maddy: The Simpsons and Breaking Bad

Maddy: My Dad’s granola, which I like to eat for breakfast before big races.

Maddy: Most sciences and math.

Q. Besides track and field, what are your other interests?

Maddy: I like to juggle, draw, read, and play board games like Ticket to Ride and Dominion with family and friends.

Maddy: Up until about sixth grade I did gymnastics pretty seriously.