Hawks Capture 5th in a row; Barrington has Encore Performance

There were no surprises at Sunday’s R.I. Interscholastic League Cross-Country State Championships. 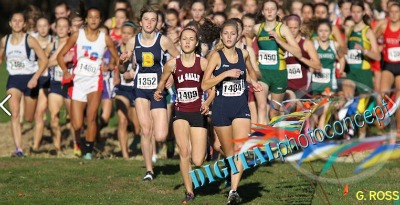 Bishop Hendricken, which dominated the field in last week’s Class A meet, earned its fifth straight team title. With all seven of their varsity runners finishing among the top 20, the Hawks easily defeated second-place La Salle Academy, 44-64.

Individually, Cumberland High senior Trevor Crawley continued his stellar season by breezing to a more than 20-second win, blazing the five-kilometer terrain at Ponaganset with a time of 15 minutes, 39.47 seconds.

The girls’ crown went to pre-race favorite Barrington, which coasted to its second consecutive title. Highlighted by an individual triumph from freshman Emma McMillan, the Eagles posted a 31-71 decision over runner-up La Salle. McMillan ran a strong 18:22.99 clocking for her victory.

“These are titles that are won by the kids. They never get old for me,” said longtime Hendricken coach Jim Doyle, about his boys’ squad, which captured its 21st state title and tenth since 1997. “I enjoy watching every single team win a state championship because it’s their moment. They work very hard for it. They start at the end of the (outdoor) track season and they work hard. It’s a long build up to get to this event.”

Senior Connor Doyle, nephew of the Hawk coach and son of the late legendary R.I. marathoner Bobby Doyle, led the way for the Warwick-based school’s latest championship. Doyle placed fourth on the Chieftains’ Covered Bridge Trail with a time of 16:06.16. He was followed closely by junior teammate Colin Tierney in fifth at 16:11.94.

The Hawks had one other runner among the top seven to secure a spot on the first-team all-state squad with senior Tyler Henseler taking the coveted seventh-place position in 16:15.92. Senior Alex Doherty was 13th overall (16:34.87) and junior Collin Manning finished 15th (16:37.61) to complete the scoring.

The Hawks never gave their coach anything to panic about, positioning themselves among the upper-echelon of the field right from the start.

“We tell everybody every week that it’s a different race. Last week we ran outstanding. We knew that was going to be difficult to duplicate,” said Doyle, whose Hawks bunched their five scoring runners in the third through seventh spots - a mere 3.15-seconds apart - at the class meet. “We focused on getting out; getting our places that we need to win a state championship. We always tell them that the hardest thing to do is win a state championship and never take anything for granted. Just go out and do your job. We wanted to run as a team, and we did.”

Crawley outdistanced Chariho senior Bryce Kelley by about 150 yards. Kelley was second at 16:01.07 and his Charger classmate Jake Kilcoyne was third with a time of 16:05.84. Crawley didn’t waste time, forging to the front of 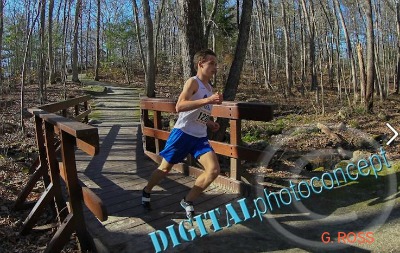 the pack after the first half mile and holding a slight lead over Kelley and Kilcoyne by the mile mark, passed in 4:55. He broke from the Charger duo upon entering the wooded section of the course, less than a quarter-mile later.By the time he exited the woods for the final seven-tenths of mile, he was well on his way to victory. Crawley, who went through two miles at 10-minutes flat, knew he had to build up a good early lead.“I felt like if it came down to the finish other people have good kicks,” he said. “Bryce Kelley was one of the best 800 (meter) runners in the state last year so obviously he’s going to have a good kick. I didn’t want that to happen.”Crawley becomes the third Clipper under Kenwood’s reign to take the individual prize at the state meet and first since 1998 when former standout Jerry Bonner copped the title.

Based on what Crawley has done this season, including last week’s convincing win at the class meet where he was more than 13-seconds ahead of Kelley with his time of 15:52.2, Kenwood was well aware that his star runner had a target on his back. “Because he’s a front runner, he doesn’t really have to worry about much,” said the CHS coach. “I did warn him ahead of time that with so many guys right there they can gang up on you as a team and obstruct you. I did warn him about that. He said, ‘Don’t worry about it. I am going out hard.’”

“I didn’t really think about it,” admitted Crawley, when asked about the added pressure of being the top seed. “I just put it in the back of my head.”

The Barrington girls averaged an impressive time of 19:02.07 from their varsity runners for their third state title in school history. The Eagles also won in 1994. Junior Megan Verner-Crist was fourth (18:54.41), senior Fiona Paine took eighth (19:13.12), junior Julianna Portelli placed ninth (19:17.26) and junior Abigail Livingston snared 12th (19:22.53) to complete the scoring.Livingston, a third-place finisher at last year’s states, is generally the Eagles’ top runner, but she has been battling a sickness the last few weeks.

“Each of them ran for each other today, especially Abigail,” said Barrington coach Ann Marie Marino. “The first comment she made to me was I am going to run for my team today. She did. It wasn’t the outcome she was hoping for (individually) but she has been sick all week. She hasn’t been feeling well for a couple of weeks. But what are you going to do? As a whole, it worked out very well.” McMillan, who posted a mild upset by winning last week’s Class A meet by a scant 1.34-second margin over La Salle sophomore Sheridan Wilbur, ran a nearly identical race at the states. The fleet-footed frosh again battled Wilbur in a back-and-forth affair for much of the 5K layout.But only this time McMillan didn’t wait until the final stretch to defeat her rival. This time, she put on a decisive surge with about 500 meters remaining. “Abby (Livingston) was with me for a while and we pushed each other through part of it,” she said. “Sheridan and I pushed each other through the rest of it. It was a good race. It was very close.” McMillan was confident she could become the third Eagle to take a state crown once she made her final surge. “That’s what we have been working on in practice is the last (part), going hard when you are really tired at the end,” she said. “Like, for example, we did four strides after our 200 workout the other day just to make sure that we could finish a race strong.”

“She is outstanding,” said Marino, about McMillan. “She has been a link to us as well, too. She has been unbelievable, keeps the team pumped up, keeps it young, keeps it fresh.”

Rounding out the top 10 finishers in Sunday’s race was Westerly junior Jackie Burr (third, 18:49.68), Mount Hope freshman Karina Tavares (fifth, 19:00.24), East Greenwich sophomore Margaret McCaffrey (sixth, 19:02.96), Cumberland freshman Amy Laverty (seventh, 19:04.22) and Coventry sophomore Jessica Bellows (tenth, 19:20.12). The top six teams and the top 25 individuals in their respective races earned a trip to the 78th annual New England Championships, to be held on Saturday at the Twin Brook Recreation Area in Cumberland, Maine. The boys’ race is slated to begin at 11:30 a.m. with the girls are set to begin at 12:30 p.m.