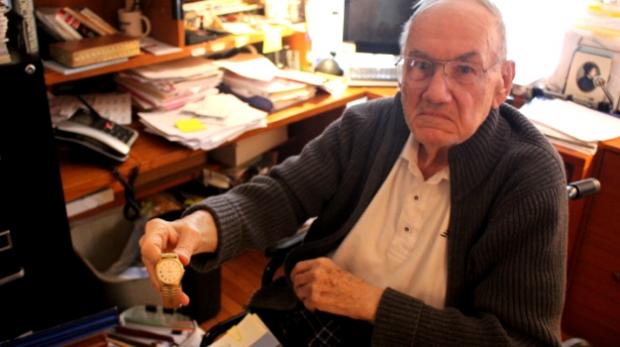 Larry Byrne of Warwick, R.I., shows the gold watch he received in 2012 as a recipient of the Donald Potts Award at the Penn Relays for his outstanding contributions to track & field..

The file cabinets inside his office are filled.

In his closet down the hallway, eight more look the same.

If you're a track & field buff in these states, one that enjoys statistics and records, more than likely Larry Byrne has been your go-to guy for the last 40-plus years. And he's worked this tireless job for not a single dime and most of it long before computers simplified the process.

"It's a hobby-type thing," he once told a Wall Street Journal reporter.

But the 87-year-old New York native, who now resides in Warwick, R.I. is more than just a "Stats Man." Particularly here on the east coast, Byrne is one of the most respected individuals when it comes to track and field, a passion he has never let go since he was a high-school runner, competing in New York during the mid 1940s..

It's a love affair that  has allowed Byrne to wear many hats throughout his life, and one that befittingly earns him the VIP treatment at most major competitions such as the New Balance Nationals and the Penn Relays Carnival, the prestigious meet that's taking place this week at the famed Franklin Stadium. Attend any of these meets, and there's a good chance you'll see Byrne trackside, witnessing all the action. 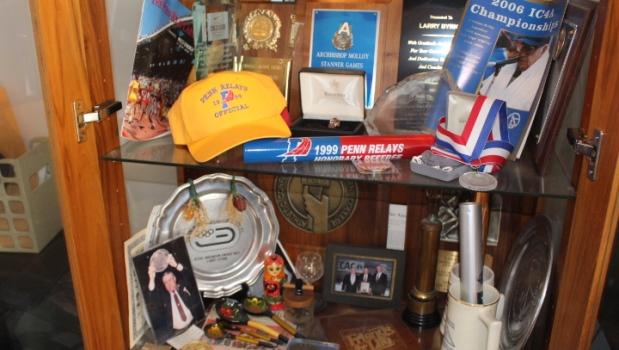 Byrne's Penn Relays memorabilia, including his yellow officials cap and baton given to him as Carnival Referee.

The Marine Corps veteran talked about his long-standing involvement in track & field with MileSplit RI Monday afternoon in the living room of his condominium, a room that was filled with countless memorabilia of his passion, including two shelves in a glass-enclosed cabinet that's dedicated to the Penn Relays.

Byrne's first connection with track & field began in high school where he was as a distance runner for two catholic high schools. He enjoyed moderate success on the oval, clocking a best of 4:37 for the mile. School didn't quite go as planned.

"I started off at Xavier High. I was there for a year and a half and I flunked out," he said. "I then went to Brooklyn Prep, also a catholic high school, and I still couldn't get along with the Jesuits and dropped out."

After his two stints in high school, Byrne enlisted in the Marine Corps, where he served for 22 years, retiring in 1971 as a Sargent. During his time in the Marines, he would earn his GED and bachelor's degree in Business Administration.

"I started going nights at Georgetown," he said. 'I got transferred all over the United States. Wherever I was stationed, if there was a college there I went. It took me 14 years to get a degree."

Byrne would land a job at Metropolitan Life where he worked as a recruiter, a position he held for 18 years until his retirement at 59, the same age he retired from the Marines.

Shortly after, Byrne coached for three years at Chaminade High where he was an assistant and later a head coach for the indoor squad in 1971.

"That's when I got my baptism to The Armory," he said. "They don't have dual meets in New York. They have big meets every weekend."

It was during this time that Byrne began his timeless collection of stats on high school T&F athletes. His dedication to the sport made him the likely choice to succeed nationally-recognized running author and journalist, Marc Bloom, as the Primary Invitation Director of the high school mile at the Millrose Games, a position that Bloom himself chose as Bryne successor. The race now bears the name of Bryne, who held the position for 34 years.

For many years, Byrne also served as the meet director for the IC4A Championships. Among other tings he has also done announcing for several track & field meets including the Yale Track Classic. He's also been an official and a member of the "split crew" in Press Row at the Penn Relays.

Speaking of  the Penn Relays, it seems only fitting to talk about Byrne's association with the coveted meet that's being held this week. In the past 69 years, he has attended 55 Penns. His first experience was in 1946, his senior year of high school.

'I was like, 'Wow!" said Byrne, when he first entered Franklin Stadium as a teenager. "It was amazing seeing some of the best runners in the United States competing. The stadium wasn't quite as packed as it is now, but it was the most I have ever seen." 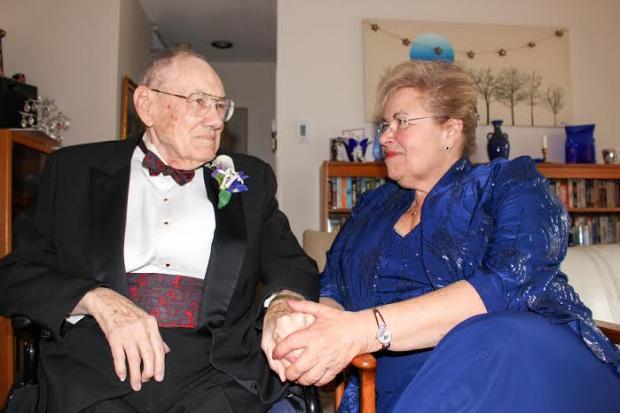 Byrne on his wedding to longtime companion Bernice DeMello on March 25.

Byrne has attended 22 straight Penn Relays since 1993. An operation to remove what turned out to be a benign tumor is his brain in 1999 has forced him to use a wheelchair. But it hasn't slowed him down."He still attends many meets, including Penn, with his longtime companion and now wife of one month, Bernice DeMello.

"They had to disturb the brain stem to the extent that if I started to walk, unaided, I would fall flat on my face," he said. "I can walk with a walker, like to get on an airplane and Bernice and I had to get to a seat. The point was, I am in good health, age-wise. In fact I had my annual checkup about a week ago and my doctor was like, "My God, you got almost 10 years younger. He was amazed. Every doctor I go to gives me a clean bill of health. But they know I can't walk." 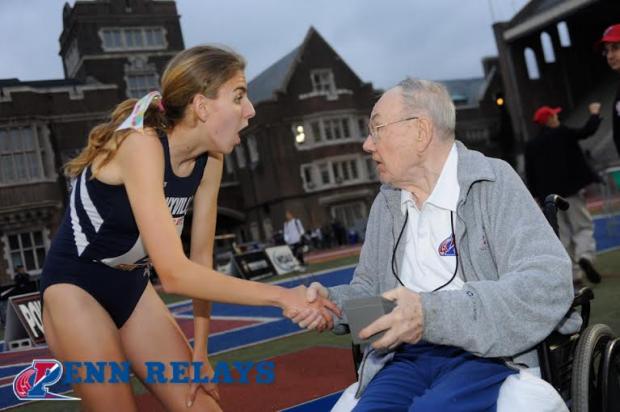 Mary Cain reacts with excitement after Byrne tells her she just set the national sophomore mile record at the 2012 Penn Relays.

For his contributions to the sport, Byrne was given the prestigious Donald H. Potts Award by the Penn Relays committee, an award that comes with a plaque, a yellow officials cap and a gold watch, the same coveted watch that is given to the winners in the Championship of America events.

While he has many great memories of the Penn Relays, he list seven among his favorite. At the top of the list is when he  was honored as the Carnival Referee in 1999. He also cherished the time he was able to give the great Mary Cain her gold watch after the distance ace from Bronxville, New York set a national sophomore and NY state record of 4:39.28 in 2012. 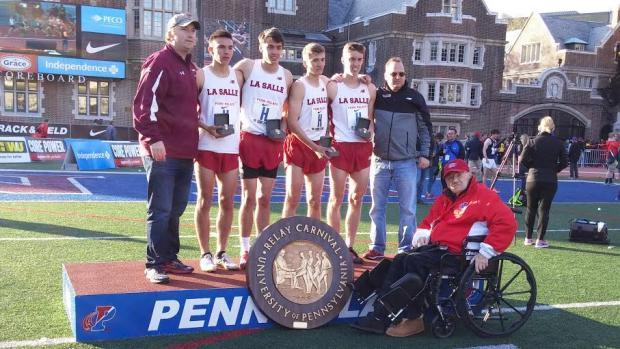 Last year, Byrne was able to present the four members of the winning DMR team (10:12.10) from La Salle Academy with their gold watches after an exciting down-to-the-wire victory where just 1.31 seconds separated the top five finishers. The win was highlighted by a gutsy anchor leg from Jack Salisbury.

"I was at the finish line in the infield. When you're down on that level it's tough to see all the race," he said. "Bernice was giving me updates, saying there in fourth, now in third. She then said there in second now and then  all of a sudden, La Salle broke out.  It was unbelievable!"

While he didn't list it among his top seven, another R.I. relay squad he recalls fondly was the winning DMR squad from St. Raphael Academy  in 1988 that featured the gifted Butler twins, Andrew and Neil.

Byrne's long streak at Penn will  unfortunately end this year. He informed the committee members a few months ago.

"I gave them three reasons," he said. "I'm running out of time age wise. Number 2, my health. My health is not bad but I got to be careful. I am not away from where my doctors are. The third is my mobility. The Sheraton (Hotel) is up a hill and Bernice has to push me and it's hard to get around."

Even though he won't be there witnessing the great events in person, Byrne will be glued to his computer screen, watching FloTrack's live stream of all the action.