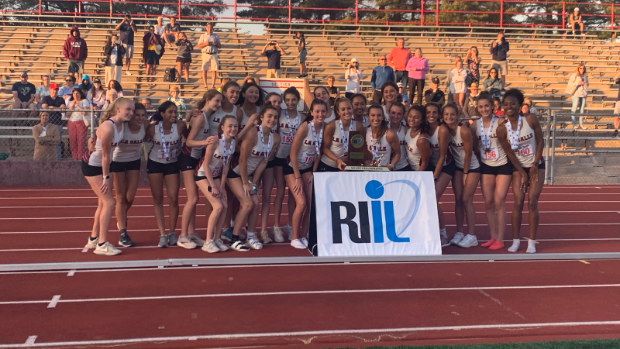 The Rhode Island State Meet is the biggest stage for the best athletes in Rhode Island to push each other to their limits. With States returning to Brown Stadium for the first time since the pandemic began, this change in atmosphere surely helped to produce some of the performance from Saturday. The 19 events produce many phenomenal performances, a few broken records, and a team champion.

The sprints were dominated by underclassmen with a sophomore taking the 100, 200, and 400 titles while a freshman took runner-up in two events and third in the other. Ailani Sutherland of Cranston West came into the meet with 4 events to run, and she executed each race to perfection. Sutherland won the prelim in a PR of 12.2, won the 100 final in 12.25, won the 200 in a PR of 25.31, helped break the meet record in the 4x100 in 47.64, and anchored the 4x400 team to a 6th place finish. Talk about putting the team on your back. Cranston West won the 4x100 by almost 3 seconds, and they later said they had run alone all year and wanted to finally give it their all at the state meet. Classical and La Salle took second and third respectively in the 4x100. This relay is chalked full of talent with three members of this team making the 100 final finishing 1st, 4th, and 5th respectively. Freshman phenom Xenia Raye of West Warwick had a busy day at the state meet. She took second in the 100 with a PR of 12.34, then took third in the 400 with a PR of 58.95, and finished with a runner-up finish in the 200 with a PR of 25.73. La Salle's Christian Cormier took second in the 400 with a 58.91. She also featured on the 4x400 which took the title over Classical and South Kingstown. That team shared two members with the 4x800, Lily Borin and Caroling Cummings. In total, La Salle found 26 points in the relays in their quest for a team title.

In the distance events, La Salle Academy found a lot of success. In the 1500, Caroline Cumming would take second to Rylee Shunney of East Greenwich in  4:44.66 to 4:39.36. Caroline Jankowich and Grace Doyle of Classical scored points for Classical to help in the team battle. This 1500 did not feature a single senior in the race. In the 800, Cummings and Borin went 2-3 in the 800 for 14 points for the Rams. Their times of 1:15.51 and 2:17.8 were just behind Grace Carr of Cumberland's 2:14.29. This was her first state title. Cummings had a busy day overall running in four events, taking home 26 points for La Salle with two relay victories and two individual event runner-ups. The 3000 saw Shunney double back to take home another state title. She rocked a pair of shades as she cruised to the win in 10:21.67. She beat Alison Pankowicz of Toll Gate in 10:32.37 and Maeve Casey who ran 10:37.66 for third. Doyle of Classical placed 5th in the 3000 as well to help Classical in the team battle.

In the jumps, Lauren Boyd of Smithfield shined. She took the long jump title in 18-01, placed 3rd in the triple jump, and a third-place finish in the 100-meter dash. Each was a new personal best by a large margin. She scored all of her team's points as they finished 8th overall. Dasani Stewart of Pilgrim took 2nd in the triple jump while Mikaya Parente took second for Cranston West in the long jump with a 5th and final jump of 17-03.25. The high jump saw Morgan Casey of Pilgrim dominate. She set a 2-inch PR and currently is tied for 39th in the country with a jump of 5-8. The junior is just 2 inches off the meet and state record set in 2012 by La Salle's Dakota Dailey-Harris. She will be one of the top high jumpers in the nation entering her senior year. In the Pole Vault, Allyson Humphries took the win. The vaulter broke the state record at the last chance meet with a vault of 11-10, beating the old state record by one inch. She just missed the meet record with her winning jump of 11-1.25, but she was very happy to come away with the win in her senior year.

In the throws, Alyssa Yankee of Cumberland was a double winner. She won the discus in 121-09 and the shot put in 38-09. The junior threw for personal bests in both events to come home with the wins. Weeko Thompson of Chariho took third in the discus and second in the shot put on the day. La Salle's Teresa Andruzzi placed third with a throw of 34-07 in the shot put, and this furthered La Salle's quest for the state title. Bethanie Jean-Philippe of Cranston east won the javelin title in 117-10, but the javelin was dominated by the North Kingstown Skippers. They placed 4-6 and 8th place for a dominant showing in the event. The hammer throw was won by Liangie Calderon of Coventry. She threw 165-04 for a nearly identical mark to her PR of 165-09.

In the team battle, La Salle took the win with 91 points. They held off strong showings from Classical and Cranston West to take the title. Classical finished second with 74 points while Cranston West placed 3rd with 71 points on the day.