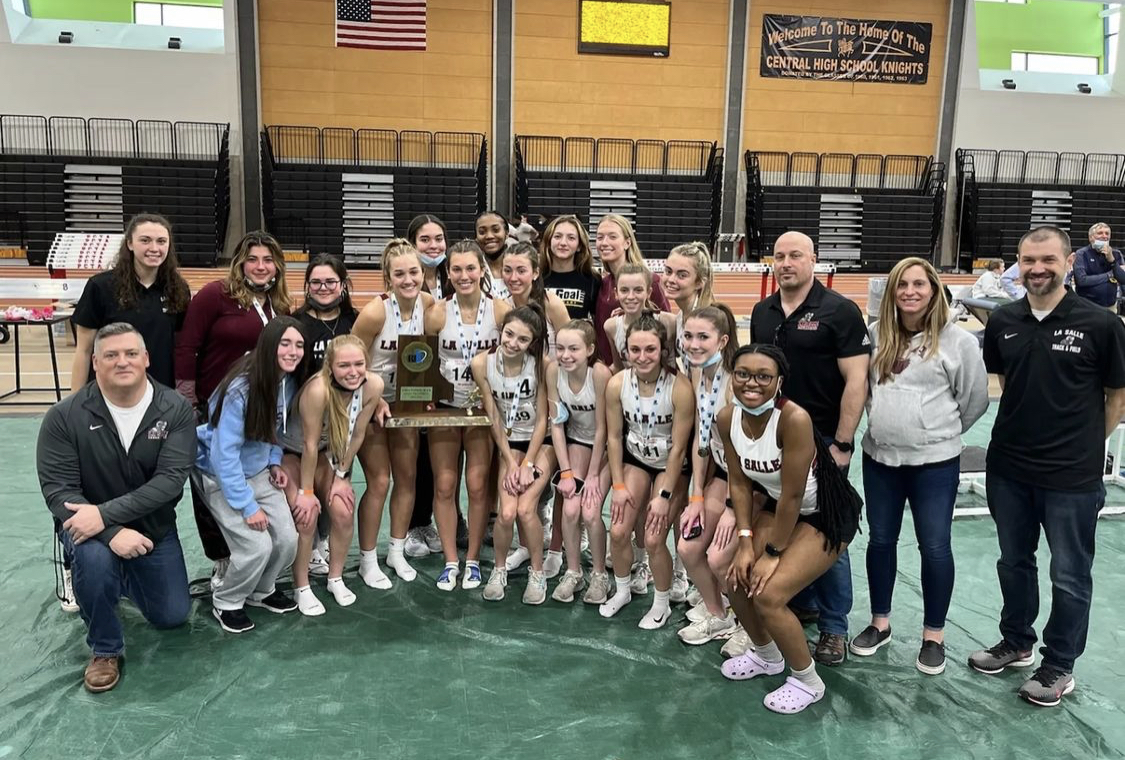 Heading into the 2022 RIIL Indoor State meet, the team battle would prove a major focus with two teams on both the boys and girls' side vying for the title.

For the boys, perennial powerhouses La Salle Academy and Bishop Hendricken would once again fight for the title. The two sides have had close battles in recent years, but the Hawks have gotten the better of the Rams, winning the last three championships in a row. La Salle had not won since 2018.

For the girls, La Salle looked to claim their 17th state title in a row, an almost unheard of feat. This also meant that a portion of the team is young enough to have never seen the La Salle Academy girl's team win a state title. Their opponent was Classical, who were led by a perfect combination of distance, sprint, and field events. These two sides would fight for the title, and both team races came down to the near end.

The girls' meet took place in the morning. The La Salle girls immediately took the lead winning the 4x800 and placing second in the 4x200. Classical upset Cranston West to win the 4x200, but still trailed by 8. The 3k saw La Salle's latest distance talent, Caroline Cummings, take the win in 10:27. In the 1500m, Classical's top runner, Caroline Jankowich, faced off with Cummings. Also in the race was Rylee Shunney of East Greenwich who sought to add another state title to her resume after winning the 600 indoors and 800 outdoors last year. However, Cummings on tired legs took the win by less than half a second over Shunney while Jankowich placed third.

At this point, La Salle had 38 points to Classicals 14. From here, Classical began to close the lead thanks to their group of sprinters and throwers, but the gap was too large. Classical would go on to take second, third, and fifth in the 55-meter hurdles, but Emma Prestage held the field off to give La Salle another 10 points.

The 55m saw neither Classical nor La Salle qualify anyone for the final as Ailani Sutherland won in 7.33. In the 600, Moses Brown went 1-2 with Sophia Gorriaran winning with a 1:37, and Kylie Eaton placing behind her with a 1:40. Lily Borin picked up 6 more points for the rams. The 300 saw Gorriaran on short rest, but this did not seem to be a problem as she cruised to the win in 40.2 as Sadie Souls placed second. Classical and La Salle picked up 4 and 2 points respectively. The 1000m saw Gorriaran for the third event in a row, but she was unfazed and picked up her third win in a row with a 3:02. Cummings placed runner up earning another 8 points for the rams while Jankowich placed third. The 4x400 saw Sophia Gorriaran anchor their team to another win earning a collective 40 out of the 50 total points for the Quakers as they finished third overall. Classical placed second while La Salle finished in 5th.

In the Weight Throw, Aviana Rezendes of Classical took runner up to Liangie Calderon of Coventry. The shot put saw Aviana Rezendes upset by La Salle's Teresa Andruzzi, daughter of the former Patriot Joe Andruzzi, to help give La Salle their 5th win of the day. Lauren Boyd of Smithfield took the Long Jump as Jacqueline Edoro of Classical took second, and in the high jump, Brooke Thompson of North Kingstown won in 5-2 while Olivia Disu placed second with a jump of 5 feet. When the points were tallied, La Salle had won with a final score of 83-74 over Classical.

The most impressive performance goes to Sophia Gorriaran as she succeeded in one of the most unique triples ever seen in Rhode Island running 4 events straight and winning them all (600, 300, 1000, 4x400). She would have placed third as an individual if she was her own team. Gorriaran looks to get ready for future postseason meets, and what events she runs next is unknown as she currently holds the US top 15 or better in 7 different events ranging from 300 through 3000.

The boy's meet took place in the afternoon, and the rams followed their counterparts by immediately opening a lead on their opponents. In the 4x800 North Kingstown took home their second title in a row thanks to the anchor leg of Jake Sullivan, La Salle would place second while Hendricken would miss the podium for the first time since 2012. The 4x200 saw La Salle beat Hendricken by over 2 seconds as Lincoln placed third out of the second heat. In 2021, La Salle dropped the baton that eventually cost them the state title, but in 2022 they sought redemption and executed. The 3000 began with Devan Kipyego of St Raphael Academy attempting one of the most difficult triples in the state meets history, 3000, 1500, 1000. Only DJ Principe of La Salle had completed this triple the same year he ran 4:00 in the mile indoors. This would be no easy feat as Henry Dennen of Cumberland and Adam Thibodeau of La Salle looked to make it a hard race from the gun. However, Kipyego had experience with this triple winning all three events in 8:43, 4:01, and 2:32 respectively.

Kipyego won the 3k in 8:37 holding off Dennen in 8:38. Thibodeau ran 8:43 for third. A total of 8 runners broke 9 as Hendricken's Troy Silvestri and Wilson Jablonski took fifth and sixth grabbing 3 points. Brandon Piedade of Barrington is one runner worth mentioning while covering the 3k. The sophomore from Barrington ran 9:44 to open the season, and previously owned a PR of 10:10 from his freshman year outdoors. He cut that time to a 9:06 by class, and a further 14 seconds at states running 8:52 for fourth. That is an improvement of 52 seconds in one season. The 1500m saw Kipyego's second leg of the triple as he faced several top runners including 2020 indoor champion Tony Capalbo of South Kingstown, Evan McGregor of Bishop Hendricken, and two-time 1000 state champion Kaden Kluth of Portsmouth. The pace went out slowly at 2:16 for 800 but picked up immensely the last few laps as Kluth and Kipyego kicked to the finish. Kipyego edged him by just .1 seconds. Jacob Connolly of East Greenwich took third while Capalbo placed fourth. With two races won, all eyes were now on Kipyego in the 1k.

In the sprints and hurdles, La Salle picked up major points as Jared Gibbons won his second straight title in the 55-meter dash while Brady Fisher took second in the 55mh. Hendricken responded in the 55-meter dash as they qualified 4 runners for the final, and earned 15 points taking second, third, and sixth. The 600 saw Pedro Mayol of Saint Raphael's and Lachlan Bishop of La Salle battle to the finish. Pedro went out hard, and Lachlan sat back and attempted to catch him on the final lap, but Pedro's lead was too great as Lachlan lost by .13 with both runners running 1:23. Elijah Saddlemire of Smithfield took third as well as Raymond Flores placing sixth and adding a point to La Salle's total on the day. The 300 Saw Brandyn Durand win in 36.06 over Jubril Bamgbala of La Salle in 36.34. Hendricken also took third thanks to Jake Kopech's final time of 36.79.

The 1000m was the final individual event and the final leg of Kipyego's triple crown. He faced several tough competitors doubling back from the 1500m as well as Will Ballard who was fresh. Kipyego went on to win the 1k over Kaden Kluth again with a time of 2:34. McGregor took third while Adam Melnick of Narragansett took fourth out of the unseeded section in 2:36. The 4x400 was once again won by Classical in 3:30 while Hendricken took runner-up. La Salle failed to qualify for the seeded section and finished 7th overall.

In the Weight Throw, national leader Tarik Robinson O'Hagan of Woonsocket did not have any legal throws as Asher Robbins of Barrington took the in 74 feet. In the shot put, O'Hagan won in 66 feet 5.25 inches. Bishop Hendricken swept fourth, fifth, and sixth scoring another seven points. Long Jump saw three runners break 22 feet as Colby Fahrney of Portsmouth won in 23 feet 2 inches ahead of Jaden Saunders of Smithfield and Casey Lambert of Moses Brown. The High Jump saw La Salle go 1-2 with Brady Fisher and Jack Johnson scoring 18 points for the Rams. Patrick Torres of Hendricken took fifth overall.

The team battle saw La Salle score 76 points to beat Hendricken by 9 as they scored 65 points. Kipyego helped score 31 of SRA's 41 points and would have finished 4th overall if he was his own team. Next week the top 6 accepted entries for all events will travel to Boston to run at New England's for the first time since 2019.