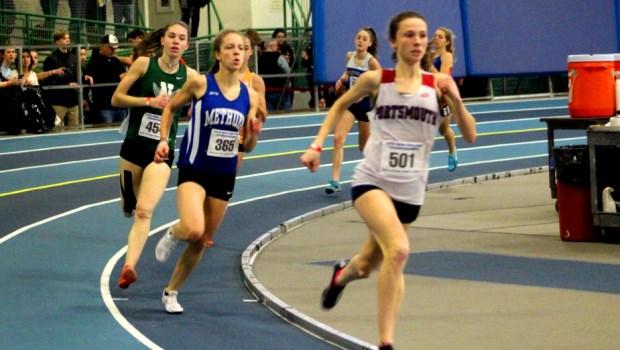 Nikki Merrill came less than a second from a state record in the 600-meter run on Saturday. Next weekend, it could be different for the Portsmouth High junior.

Merrill dominated at the New England Championships, winning her second straight 600m crown with a nation No. 2 of 1 minutes, 31.79 seconds.The Patriot standout built a substantial cushion by the time she reach 400m, passed in 59 seconds, and won by nearly four seconds. Merrill came mere strides from the 12-year-old R.I. record of 1:30.87 by former Westerly great Samantha Gawrych.

Afterwards, Merrill talked about her plan entering the regional competition and her hopes of possibly dipping under the current state 800m record at next weekend's New Balance Nationals. Former Classical star and current Stanford senior Maddy Berkson holds that mark with her 2:06.67 at the 2013 nationals.

Karweh is focused on earning All-American status at the NBN with the possibility of matching (or exceeding) his PR of 6-10.

East Greenwich's Cebastian Gentil finished second overall in a competitive 600m. Gentil did the pace-setting for most of the race until relinquishing the lead on the final straightaway to eventual champion, Malcolm Going of Danbury (CT). Danbury broke the tape in 1:20.38 with Gentil finishing at 1:20.67.

Westerly's Randi Burr had a nearly eight-second PR in the 1,000m. Competing in a stacked race where the top six finishers were under 2:57, the Bulldog senior secured fourth with a time of 2:53.95.