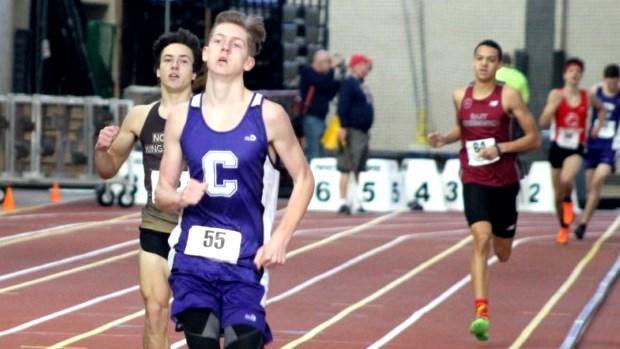 Here's a race that we are expecting to come down to the final straightaway, possibly the last few meters. On the line with relatively fresh legs, save for the 4x800m relay earlier, are Classical's Conor Murphy, La Salle's Joseph dos Reis, and Toll Gate's Nikolas Reygadas to name a few. All three have proven to be tough competitors this season, and all three will be eyeing the individual title at the end. We're predicting that this race will not be strategic with someone willing to take it out hard from the beginning and the rest to follow. Murphy has had an incredible sophomore season with best of 2:30 for the 1,000 and 4:05 for 1,500m. The Rams' dos Reis won the Dartmouth Relays in January with a season best of 4:21 for the mile. He also clocked 4:24 to capture the East Coast Invitational. The La Salle standout is coming off a disappointing race at the New Balance Grand Prix where he finished  last in the Junior Mile. You know he'll want to rebound in a big way on Saturday. The Titans' Reygadas, who we think we'll be that guy that will push the pace in the early stages, can also contend for the title if everything works out as planned. There's other runners like La Salle's Max DiMuccio, Chariho's Timothy Champlin and North Kingstown's Sam Toolin that are legitimate contenders. Most of these runners will be back at it again in the 1K, another race that should draw quite a bit of excitement. Added to the mix are North Kingstown's Jack Perrault and Hope's Elijah Akindolie.