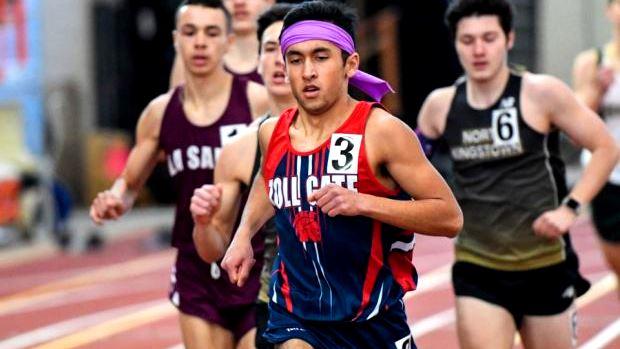 Bishop Hendricken continued its dominance in the Class A meet, winning its 24th straight title on Saturday. The Hawks collected 114 points. La Salle was second with 80 points and North Kingstown secured third with 64 points.

In the girls' meet, La Salle earned its second consecutive crown and 12th overall with 110.5 points. Classical placed second with 82 and North Kingstown was third with 67 points.

The two runners broke from the lead pack by the midway point of the 15-lap race. DiMuccio did the pace-setting, but McMahon stayed just a stride or less behind during the closing laps.  The tandem passed the mile mark at 4:45. DiMUccio tried to break from McMahon a few times during the last two laps, but the Hawk runner hung on right to the finish.

Utilizing his strong finishing speed, La Salle's Joseph dos Reis blazed to the 1K title where he was timed in a two-second best of 2:34.33. The Ram junior was involved in a tight race that included Reygadas, North Kingstown's Jack Perrault (third, 2:36.07) and Sam Toolin (fourth, 2:36.55).

Reygadas did the early pace-setting with Perrualt taking control with 300m remaining. With just about 150m left, dos Reis blasted past Perrault on the back straightaway and shifted into high gear the remainder of the way.

Defending champion Chris Choquette copped the 55m hurdles in a down-to-the-wire race with North Kingstown's Cameron Allen. Choquette edged Allen at the finish with his time of 7.90. Allen was timed in 7.95 for runner-up honors.

Cumberland's Grace Henson won a close race in the 600m where she outpaced Classical's Bridget McKierman with her winning time of 1:41.47. McKierman secured second in 1:42.68. East Providence's Christy Long, a freshman, was third at 1:44.41.