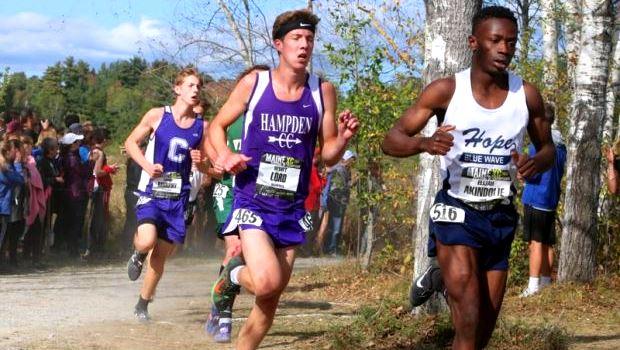 Hope's Elijah Akindolie, front, and Classical's Conor Murphy, back, finished among the top 10.

A few Rhode Island teams and individuals made the four-plus hour trek to Belfast Area High School for the Maine Festival of Champions.

Let's just say it was worth the trip.

The Ocean State, one of few out-of-state competitions at the popular event, made its presence known at Saturday's meet.

Among the 68 schools that competed in the boys' event, East Greenwich was second best, compiling a score of 123 points. Jeffrey Pederson led the Avengers, who had all their scoring runners among the top 42 in the combined results (Seeded and Unseeded). Pederson was timed in 16 minutes, 19.35 seconds to place 19th overall. A total of 933 runners toed the line in the two events.

Individually, Classical's Conor Murphy and Hope's Elijah Akindolie finished in the top 10. Murphy, who is just a tenth-grader, was timed in a personal best of 15:51.12. That clocking is currently No. 1 in the state for the 5K distance. Akindolie also manufactured a PB on the rolling landscape at Belfast with a time of 16:04.43, second best in R.I.

In the girls' race, Cumberland finished third overall as a team with 240 points. Sophomore Adah Anderson led the Clippers by taking 13th overall with a time of 19:09.01. East Greenwich's Leah Grant was 20th overall at 19:18.32.