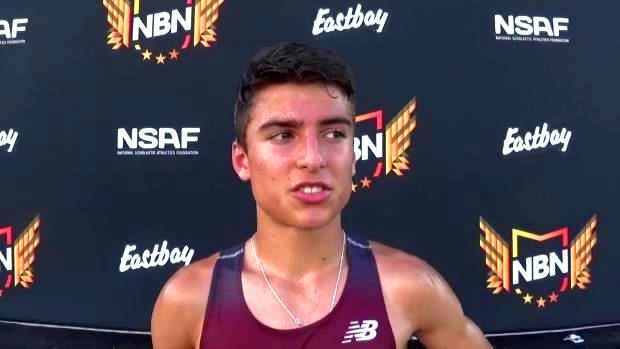 La Salle's Max DiMuccio talks with the media after winning the Freshmen two-mile run at the New Balance Nationals Outdoor Championships this past June.

With the graduation of three-time champion DJ Principe of La Salle and last year's runner-up Mars Bishop of Barrington, the individual title at this year's State Meet appears to be up for grabs.

One runner that has potential to make it happen is the Rams' DiMuccio. At last year's meet as a freshman, the La Salle standout finished third overall. He followed that effort by taking fifth at the New England Championships where he clocked a personal best of 15:50.36 for the 5K distance.

DiMuccio, who clocked sub nine minutes for 3,000 meters and dipped under 4:10 for the 1,500m during the track season, appears to be getting in some good solid training this summer. This past weekend, he was tenth overall at the Blessing of the Fleet 10-Mile Road Race where he was timed in 58:46.

Look for DiMuccio to try and take charge on the trails this fall with hopes of making it four straight individual crowns for La Salle.