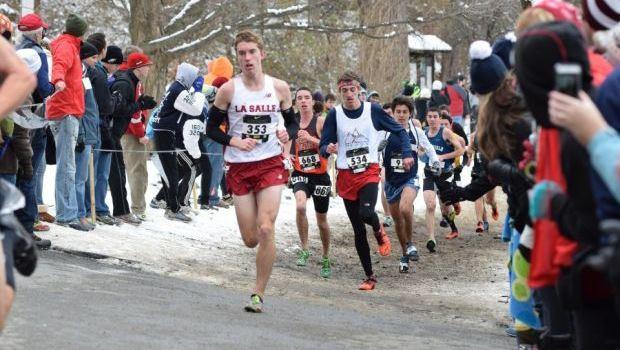 Salisbury didn't get to show his full potential in cross country last fall. A quadriceps injury sidelined the La Salle runner for nearly two months of the season. Still he managed to help his teammates win the state crown by finishing a courageous ninth at the championship meet and also coming through with solid performances during their amazing run to the Nike Cross Nationals. It should be dramatically different this year. As Salisbury proved once the injury was behind him, he's capable of great things once he toes the line.The gifted runner earned four individual state titles on the indoor and outdoor surfaces, winning the 1,500m and 1,000m during the winter and the 1,500m and 800m this past spring. More importantly, Salisbury soared against national-level competition. He finished second in the mile at the New Balance Grand Prix in February where he sizzled to a time of 4:08.76. He improved on that clocking by two seconds with a third-place effort at the Prefontaine Classic in May. Salisbury was also the anchor for the Rams' indoor national champion 4xMile squad and their distance medley relay at the Penn Relays Carnival. Salisbury's fastest time for 5K is 15:42, which he did at the season-opening Injury Fund Carnival last year. He should easily set a new PR this fall. With the Rams focused on winning another team title, it's highly possible that Salisbury and his teammates, D.J. Principe and Matt Bouthillette, will work together throughout the race. Coming out of the woods and onto the open fields for the last half mile the three could be battling for individual honors. If it's still tight the final 200 meters or so, Salisbury gets the nod. Rarely does he lose with his devastating kick.