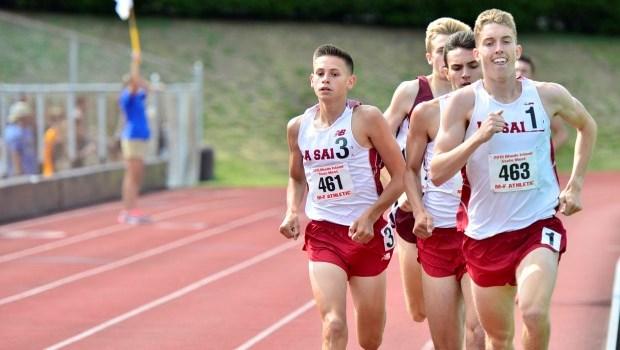 It’s hard enough to win a state title. To win three during a school year in relatively the same sport, at least for running, is even tougher.

But on a picture-perfect Saturday afternoon at the R.I. Track & Field Championships, the same day that American Pharoah won the Triple Crown with its victory at the Belmont Stakes, La Salle Academy won its version of the historic triple by capturing the school’s first outdoor crown since 1978 with an 80-69 win over second-place Barrington at Brown Stadium. East Providence finished third with 65 points.

With their win, the Rams completed a sweep of team titles this year, also winning the cross-country and indoor track championships.

“(Hendricken coach) Jim Doyle always used to say to me that winning is never easy and today was no exception,” La Salle head coach Vin McGinn said. “Barrington is an unbelievable team. East Providence ran and jumped their hearts out. But these guys, these seniors, these underclassmen at La Salle Academy, are a really special group of kids, a fantastic group of leaders that just dedicate themselves to the team; coming together for not only their individual performance but for each other.”

Bolstered by a strong distance crew, La Salle was about a 20-point favorite to earn the team title on Saturday and end its 37-year drought. The competition was certainly strong, especially Barrington, a team that was on everyone’s list as a possible threat to the Rams.

But in order for the Eagles to pull off the upset, La Salle needed to have a few hiccups along the way, a few performances that didn’t quite go as planned. That never happened.

The La Salle coaching staff got just what they wanted out of their distance runners, who scored 64 points. Junior Jack Salisbury was a double-winner, taking both the 1,500-meter run and the 800m. In the longer race, Salisbury edged junior teammate Matt Bouthillette with a time of 3 minutes, 58.24 seconds. Bouthillette took second in 3:58.48. East Greenwich’s Tommy Sommer broke up the Rams’ party to place third at 3:59.04. He was just ahead of La Salle sophomore D.J. Principe, who added four more points to his team’s total of 22 in the event by finishing fourth with a time of 4:00.10.

“My legs are feeling it. I was just coming here and doing whatever I could for the team, get as many points as possible,” said Salisbury, who also competed in the 3K. “My teammates came through. They came up big today. I was just trying to do my part.” 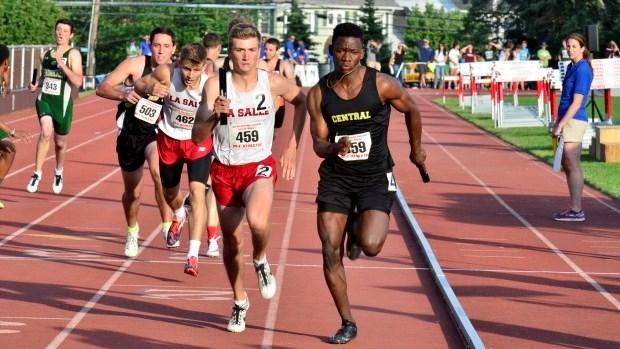 “But Jack Salisbury,” he added, “we weren’t sure if the meet was ours or not and Jack Salisbury volunteered to go into the 3,000 and do whatever he could for the team.”

To no one’s surprise, Barrington got a bulk of its points in the throwing events. In the hammer, the Eagles swept the top-three placements with junior Bobby Colantonio defending his crown with a heave of 234 feet, 7 inches. Senior teammates Adam Kelly (second, 227-11) and Mike Alvernaz (third, 198-03) completed the sweep.

Barrington scored a dozen points in the discus with Kelly taking runner-up honors with a throw of 149-06 and Alvernaz placing fourth with a distance of 143-07. The event was won by Pilgrim’s Joe Yang, who had a six-foot personal best of 154-1.

Kelly nearly matched his PB in the shot put where he was a No. 2 seed, unfortunately his 49-0.25 effort earned him fourth at Saturday’s meet and a loss of at least four potential points for the Eagles in their quest for the team championship. Alvernaz was fifth with a toss of 46-1.5. South Kingstown’s Matt O’Neill, a runner-up at the indoor state meet, exceeded the 50-foot mark for the first time in his career with a winning distance of 51-08.

In one of the bigger upsets of the meet, Lincoln’s Joseph Taylor won the javelin with a 15-foot best of 181-3. Top seed Jamie Heinl of Barrington had an off-day, finishing fourth with a distance of 161-03. 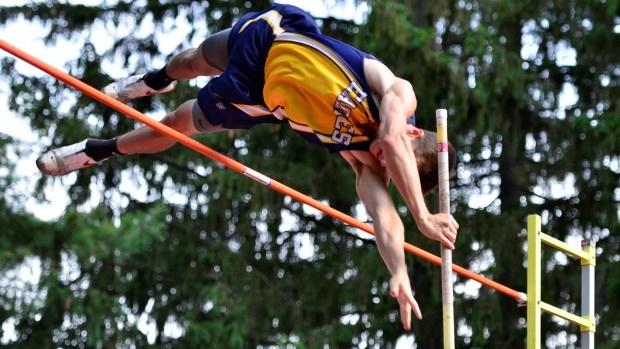 The Eagles got a win from John Cavanagh in the pole vault. The senior earned the crown on few misses against Smithfield’s Carlton Eaton with a height 13-6.

East Providence, the 2012 state titlist, scored most of its points in the jumping and sprint events. The Townies got their lone triumph in the meet from Trystan Casey, who captured the triple jump with a leap of 43-2.25. Casey was also a runner-up in the long jump with a distance of 21-5.25. South Kingstown tenth-grader Anthony Shepard won the event at 22-1.

“It was really unexpected,” said Walo, about his win in the 400m. “But if I didn’t work hard in practice this would have probably never happened.”

Mount Pleasant’s Trevane Clark lived up to his top billing in the 200m, dominating his rivals with a winning time of 21.78. Narragansett’s Mike Silverstri was second at 22.65. Warwick junior Levi Martin soared to a height of 6-4 to take the high jump and Classical’s Nathan Narcisse claimed both hurdle crowns with a time of 14.62 in the 110m HH and 40.22 in the 300 IH. 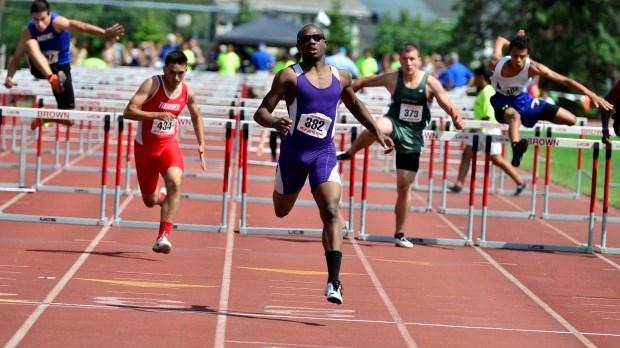