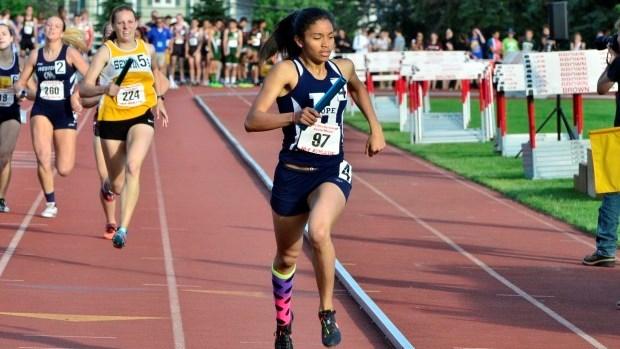 All the talk leading up to Saturday’s girls’ state track & field championships was about a close battle between La Salle Academy and Hope High for the team title. There was hardly, if ever, a mention about Smithfield.

Here at MileSplit RI we neglected to mention the Sentinels in our preview article about the meet. Even the most recent coaches’ poll had Smithfield ranked No. 4 without a single first-place vote.

In a day filled with surprises, this small, but talented school from the northern part of the state pulled off the biggest surprise of the day at Brown Stadium. With some key placements and triumphs in the field events and added support in the running, Smithfield earned the team plaque on Saturday with an 83-78 win over second-place Hope. La Salle finished third with 64 points.

“We believed in ourselves since last year when we came in third. It was the first time the older girls on the team really believed that we could win a state title and compete with the top teams,” Smithfield head coach John Marchand said. “Until then, it was always division and class (championships) and we settled for that. All year that has been our motto to try and contend for the state title. We trained for it. We trained through indoor (track) for it. It was a collective goal for all the coaches and athletes. They are a pleasure to be around… It was just a true team. Win or lose it was an incredible, incredible last two years."

Smithfield scored 54 points in the field events, including three victories. Perhaps an omen that it would be the Sentinels’ day occurred early in the meet at the hammer cage. In that event, Smithfield junior Meagan Malloy, a No. 3 seed, upset the competition with a personal-best heave of 168 feet, 9 inches. She defeated runner-up Lysah Rusell of Classical, another surprise, who had a distance of 165-0.

“Maegan worked so hard,” Marchand said. “I was just as happy for (weight coach) John Sliney as I was for Maegan. She had a broken back during the indoor season from training. I knew that disappointed her, but she was able to finish the indoor season and she just kept working and working and getting her spins down with the coaches and the results speak for themselves. She came up big today.” 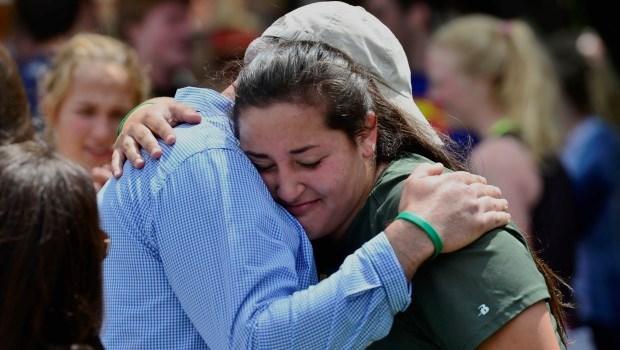 Also coming up big among other athletes was juniors Alyssa Colbert and Stephanie Mattson. Colbert was a surprise winner over top-seed Paige Olauson of North Kingstown in the javelin with a personal-best toss of 123-4. Colbert added 10 more points to the Sentinels’ total by placing third in the shot put at 35-10.75 and fourth in the discus at 117-07, both PRs.

Mattson came up with the best performances of her career by winning the long jump with a leap of 18-0 and placing third in the triple jump at 35-10. Her most important event of the afternoon may have been the meet-closing 4x400-meter relay where she anchored the Sentinels to a second-place finish behind Hope to secure the crown. Hope finished at 4:01.19, while Smithfield was timed in 4:02.89.

For the Sentinels to win the state title it had to get fourth or better in the 4x400m if top-seeded Hope won the race. Smthfield fell back to that position, sometimes fifth or sixth, a few times. With her teammates screaming in the stands, Mattson knocked off a few runners in the closing stages of her leg to lift her team to its key placement.

Marchand admitted he was a little nervous, but confident his star athlete could get the job done.

“We had the big dog anchoring so my thoughts were pretty positive,” he said. “She’s just an amazing, amazing athlete.”

Hope’s Quashira McIntosh closed out her spectacular high school career against R.I. competition with three individual victories, defending her crowns for the fourth straight year in the 100m and 200m dashes and adding the 400m title to her impressive list. In both the 100m and 400m, the Nebraska-bound sprinter established state records with times of 11.82 and 55.44, respectively. She won the 200m with a state-meet mark of 24.32. 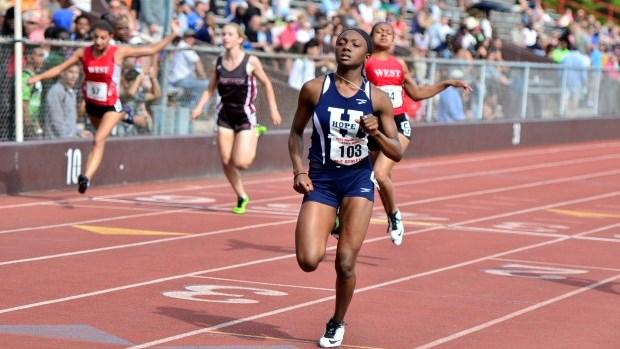 If that wasn’t enough, McIntosh also anchored the Blue Waves’ winning 4x100m relay to a combined time of 48.06. The Hope star’s three individual wins was just the third time in state meet history that the feat was accomplished.

“It feels amazing. I shocked myself. I honestly didn’t think I could do it in the 400 and the 100,” she said, about the back-to-back events. “I was quite surprised, but it feels great.”

Hope also got a win from No. 1 seed Chevell Burgess in the 300m hurdles where the junior ran an all-time best of 44.57. Burgess was also second behind North Kingstown freshman Tereza Bolibruch in the 100m hurdles where she had a PR of 15.19. Bolibruch won with a time of 14.90.

Whitney Jackson placed second for Hope in the triple jump. Jackson leaped a distance of 36-7.25. Winning the event was Pilgrim’s Melanie Brunelle, who had a multiple-winning afternoon inside Brown Stadium. Besides capturing the triple jump where she had a nearly foot best of 36-11, the Patriot junior also upset defending champion Carly Timpson of Narragansett in the high jump on fewer misses, matching her best with a height of 5-3. The versatile Brunelle added a fourth-place finish in the 300m hurdles in 48.25. 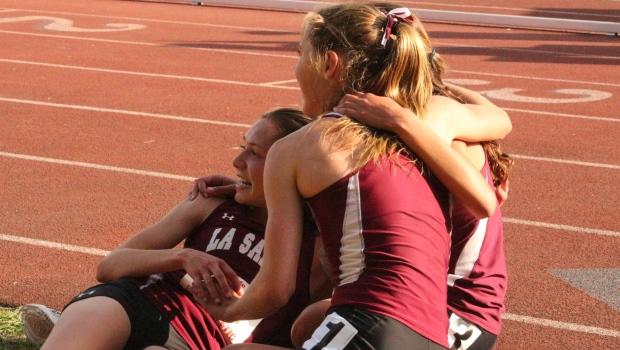 The La Salle runner had to contend with a talented McMillan, the three-time state cross-country champion, throughout the race. Wilbur made her move for the title by putting on a surge with a little more than a lap remaining.

“I was like really excited for this race,” she said. “I knew that I would have a lot of great competition and Emma always pushes me to run a fast time. I was a little anxious how I would feel because I ran the 1,500 about an hour and a half before and I pushed myself really hard in that race. I wasn’t sure how I would recover. Ultimately I was confident in my abilities because I know the 3K is more my strong suit.”

La Salle also had a victory from Kelsey Coughlin in the pole vault. Coughlin led a 1-5-6 finish for the Rams with a PR of 10-0. The Rams’ Michaela McNamara was fifth and Laura Antonelli was sixth, both at 9-0.

Another athlete that closed out her high school career in the Ocean State on a strong note was Classical senior Alva Hicks. Hicks broke her own state record in the discus by defending her state title with a distance of 147-09. She also took the shot put for the second straight year with a toss of 39-9.25 and was fifth in the hammer at 162-01. 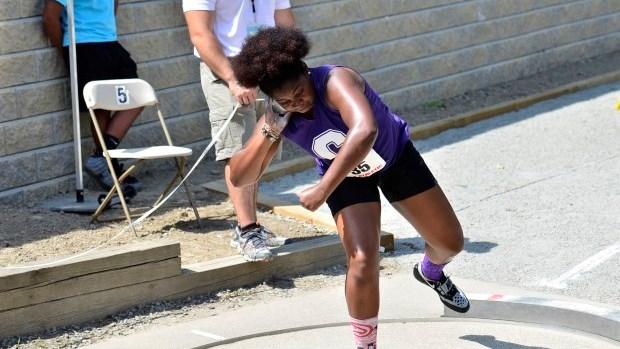