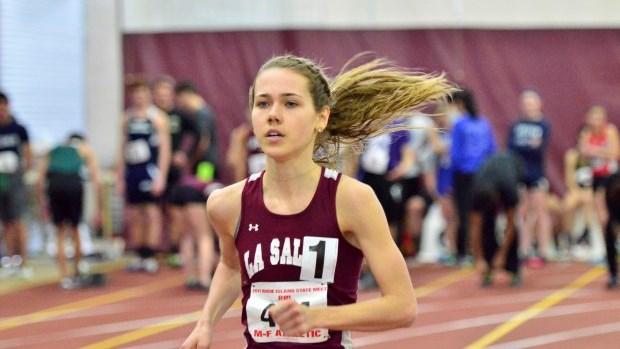 Sheridan Wilbur and Eliza Rego have been part of several state team titles in cross country and track. But prior to this past Saturday's R.I. Track & Field Championships, neither of the La Salle Academy runners had attained an individual crown

Those long, overdue honors were rightly earned this weekend. Not to mention, an unprecedented ninth consecutive team championship, too.

The gifted duo took care of the distance events with Wilbur capturing the 3,000-meter run and Rego bringing home a pair of gold medals in the 1,500m and 1,000m, lifting La Salle to a convincing 105-58 win over second-place Hope High, whose star sprinter Quashira McInosh added four more state crowns to her never-ending list.

For La Salle head coach Dave Wright and assistant Kelly Martin, the thrill of another banner to hang at the school's gymnasium never gets old.

“It's always exciting to win a state title," Martin said. “It's never easy. You have to have your best day."

Rego, a runner-up six times in individual competition at the state meet level, finally was able to experience the joy of crossing the line first, and she did it twice. The Ram standout coasted to an easy win in the 1,500m where she was timed in 4 minutes, 42.06 seconds. She earned title No. 2 by establishing a state-meet record of 2:54.76. Finishing second in both events was junior teammate Karina Tavares with times of 4:45.77 and 3:00.94, respectively.

Wright, who has been at the helm through all the championships, was confident in this year's squad.

“If the kids came in and did what they've been doing we knew we would have a good day and score a lot of points," he said. “That was really the focus…and consistency."

In the 55m dash, she tied a meet record that she shares with former teammate and multiple all-stater Royal Cheatham.

“That, to me, is my funniest race because I tied in my sophomore year," McIntosh said. “It's funny because I just keeping running it. I know I can run faster because I did 7.09. That's a state record. Hopefully I can do better in outdoor." 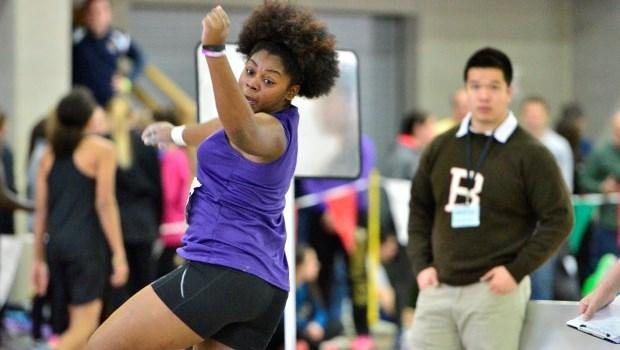 Classical senior Alva Hicks also won two individual titles with career best of 57-6.5 in the 20-pound weight and 41-0.5 in the shot put. Classical junior Lysah Russell was second in the weight at 52-6.5.

Hicks currently ranks No. 5 in the country in the weight. She is hoping to eventually crack the 60-foot barrier, targeting the New England Weight Throw Championships next week or the New Balance National Outdoor Championships in mid-March.

In the long jump, Cumberland junior Meaghan Scullin defended her title with a leap of 17-9.26. Coventry's Charleen Theroux was second at 17-1.5 and Smithfield's Stephanie Mattson was third, also at 17-1.5.

Narragansett senior Carly Timpson continued her dominance in the high jump with a leap of 5-4. Timpson was last year's indoor and outdoor titlists. She's now focused on winning a NE title on Friday at Boston's Reggie Lewis Athletic Center. She has a best of 5-6, which she did twice this season.

Classical junior May Stern had to fend off a pair of underclassmen to win the 600m with a PB of 1:38.22. North Kingstown sophomore Katarina Ho was second at 1:40.13 and Westerly freshman Randi Burr was third in 1:40.17.

Toll Gate senior Erika Pena copped her first individual title, winning the 55m hurdles with a best of 8.64. She was just ahead of Classical junior Krysan Davidson, who was second in 8.78.