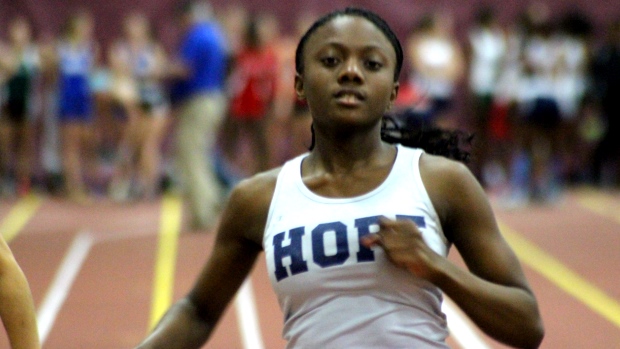 Leading up to the New Balance Nationals this weekend at the Armory in New York City, MileSplit RI will feature a top R.I. athlete (relay) that will be making the trip to the Big Apple to compete against the nation’s best.

Below is a Q & A with the Hope junior Quashira McIntosh, multiple state champion and record-holder for several sprint event. The Blue Wave star will be competing in the championship 200-meter run, the 4x200m relay and the Emerging Elite 60m.McIntosh has fond memories of The Armory, a place that she has enjoyed much success since competing as a ninth grader.

Q: You dominated R.I. competition this season and defended your titles in the 55 dash and 300 at the state meet. What is it that keeps you motivated? What is it that drives you to succeed?

Quashira: What keeps me motivated is my family, my friends and my teammates, but I can’t forget my coach Tom.

Q: You are entered in the championship 200 where you own an indoor best of 24.66, set just a few weeks ago at the Eastern States Championship? What are your expectations at the nationals?

Quahsira: My expectations for the indoor nationals championship 200 meter dash is to run a personal best of a 24:45

Q: You have competed at The Armory in New York, site of the NBNI, numerous times in your career. What is it that makes the facility so special?

Quashira: What makes the Amory so special to me is when i was a freshman my team and I at that time set an all-time New England and state record and for that i am very attached to the Armory.

Q: You’re also entered in the 4x200 and the Emerging Elite 60. What’s your goals in those two events?

Q: Besides track and field, what are your other interests?

Quashira: Something you don't know about me is that my favorite singer is Rihanna