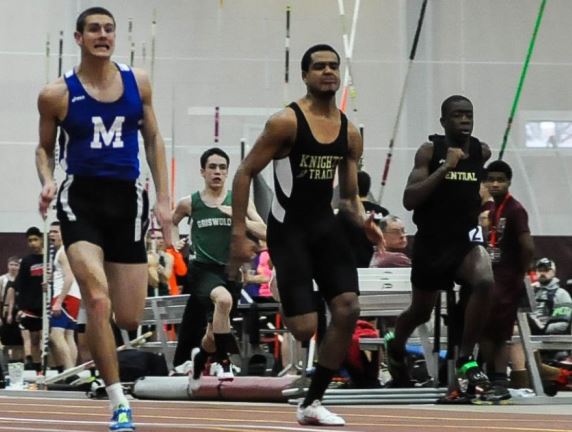 Judging by the times and distances posted this past weekend at the East Coast Invitational in Providence and the Yale Track Classic in New Haven, Connecticut, it should be one heckuva state meet next month.

It’s no secret that the battle for the boys’ title will include Bishop Hendricken, La Salle Academy and North Kingstown. The trio confirmed that statement at the two invites. 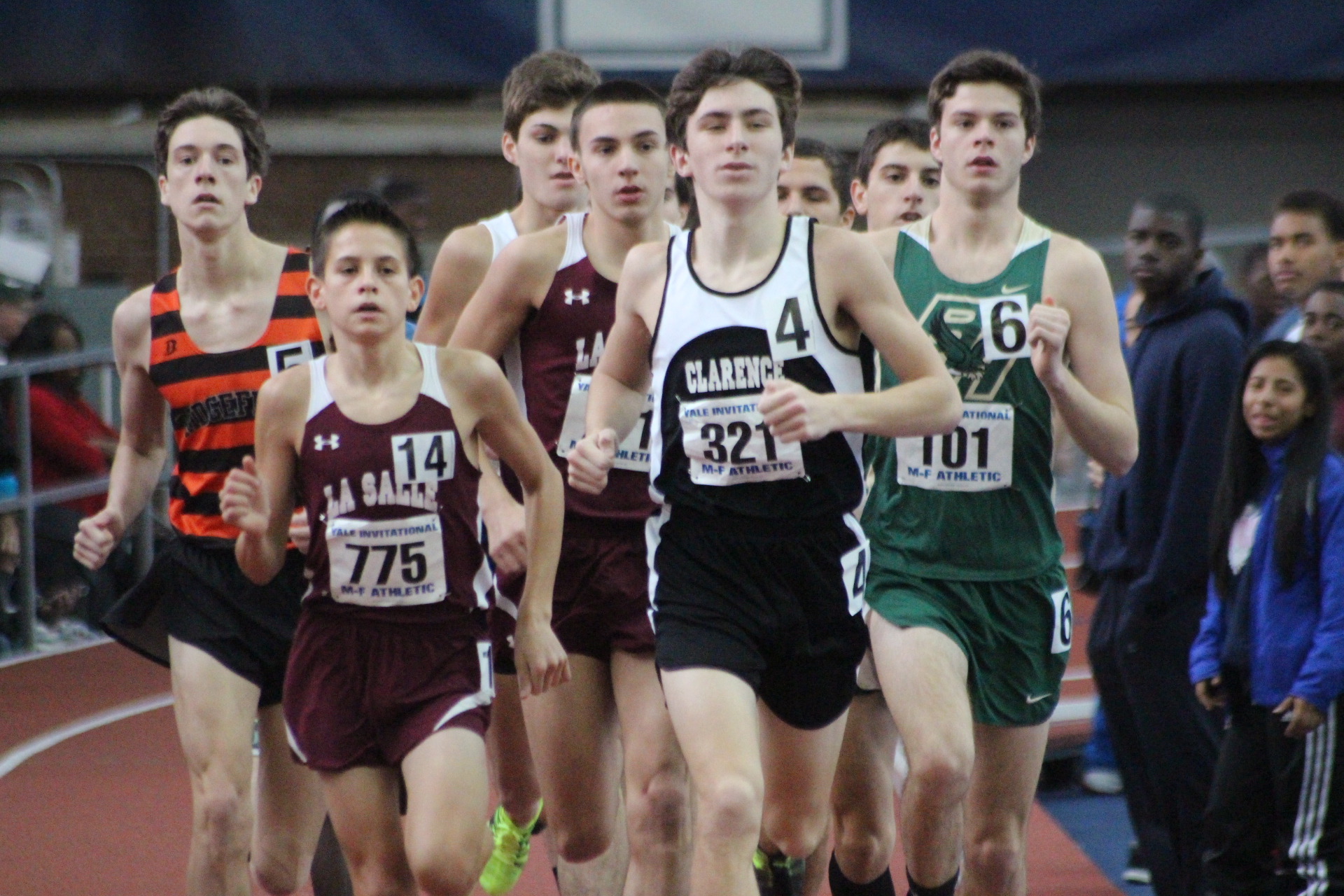 At Yale, the Hawks and Rams brought some of their top distance runners to Coxe Cage where high finishes were in abundance. In the boys’ Championship 3K, the Hawks’ Colin Tierney came a mere stride from snaring victory. Tierney finished .16 of a second behind winner Stephen Garrett of Tatnall (DE) with a school-record time of 8 minutes, 35.36 seconds. He broke the existing mark by former Hendricken great and multiple all-stater Jake Sienko by five seconds!

“Basically (my plan was to) sit with the top three guys and run seventy (second) pace,” he said. “With seventy pace it would be an 8:43 3K and I could bring it down under 8:40 if I was lucky enough to do that.”

Tierney stuck with the leaders while maintaining a pace close to 70 seconds (per 400) during the 15-lap race. He hit his first mile at 4:38, just two seconds behind early-race leader Patrick Tucker of St. Anthony’s (NY). Tierney and Garrett broke from the pack with a few laps to go.

The Hawk standout tried to make a move on the last backstretch but couldn’t get ahead of Garrett by the curve. He then tried again down the final straightaway on the inside lane, coming up just short the last few meters.

“I think I should have passed him going into the last lap,” Tierney admitted. “He had a good surge on the backstretch and then poked around me on the final straightaway. I thought I had him but then he cut back from the second lane into the first lane. He kind of gave me a little elbow and just edged me at the line.”

La Salle, a team that should score a considerable amount of points in the distance events at the R.I. championships, had two of their runners dip under 8:51 in the race. Sophomore Matt Bouthillette finished sixth in 8:40.25 and freshman D.J. Principe, who hung with the leaders for the initial few laps, was 15th overall in 8:50.72, the fastest time in the country by a ninth-grader this season by 31 seconds!

In the Championship Mile, La Salle sophomore Jack Salisbury was third overall with a PB of 4:18.98. East Greenwich senior Garrett Scanlon was 16th at 4:26.87. The Rams also had a runner-up finish from Jamie Placco in the 800 with a time of 1:59.02.

The North Kingstown boys stayed in the capital city over the weekend and proved their strength in multiple events. Defending 600 champion and state-record holder Zachery Emrich broke the tape in the 400 with a fast 50.29 clocking.

The Skippers should be able to field a sub-eight minute 4x800 squad next month. Besides the speed of Emrich, who has run 1:55, N.K. had three of its runners among the top four finishers in the 800 at the East Coast meet with low two-minute efforts. Junior Joe Craven won the race with a time of 2:02.05. Ian Connors, another junior, was second in 2:02.55 and senior Dallin Smith placed fourth with a 2:03.08 clocking.

It’s not whether or not Barrington junior Adam Kelly will win the 25-pound weight throw at the states, but if he’ll break the 14-year-old state mark of 81-8.75. Kelly 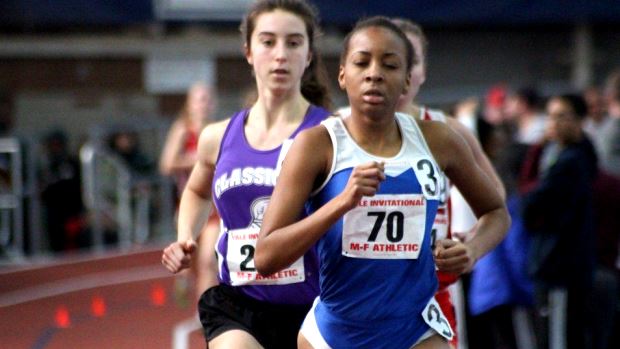 Some of the state’s top girls showed their mettle this past weekend. Two-time defending state titlist Maria Bolibruch of North Kingstown captured the 55 hurdles at Yale where she broke the tape in 8.55.

Classical senior Maddy Berkson placed third in the 3K down in New Haven where she dipped under her own state mark with a time of 9:47.35. The race was won by Claire Howlett of Westhill (CT), who ran a nation best of 9:43.37. Finishing second was another elite high-schooler, Caroline Alcorta of West Springfield (VA), in 9:45.59. Berkson was also fourth in the 800 at 2:17.9.

In addition to Berkson, the middle-to-long distance events should feature several La Salle and Barrington runners at the state meet. The Rams and Eagles staged a close battle in the 4x800 at the East Coast. Barrington took the prize with a 9:32.52 clocking, a time that ranks No. 8 nationally. La Salle was second in 9:34.26, which is tenth on the list.

Individually, Hope junior Quashira McIntosh came short of making it to the victory stand at the East Coast meet, which is a rarity. She still produced some fast times that proves she is maintaining her fitness level leading up to next month’s meet. McIntosh was third in the 55 dash (7.24) and second in the 400 (1:00.98). The latter race was copped by Alicia Holloway, a versatile competitor for Classical, who was timed in 1:00.77.

Classical showed its strength in the weight events this weekend. Junior Alva Hicks was a double-winner at the East Coast meet. She beat Exeter/West Greenwich senior Tori Ebert by two inches in the shot put with a distance of 38-7. She also won the weight throw at 49-5. Placing second in the event was Ebert at 47-6 and finishing third was Classical senior Bianca Donadio at 45-0.5. Donadio and Hicks were first and second in the weight at Yale with throws of 46-11 and 46-8, respectively. 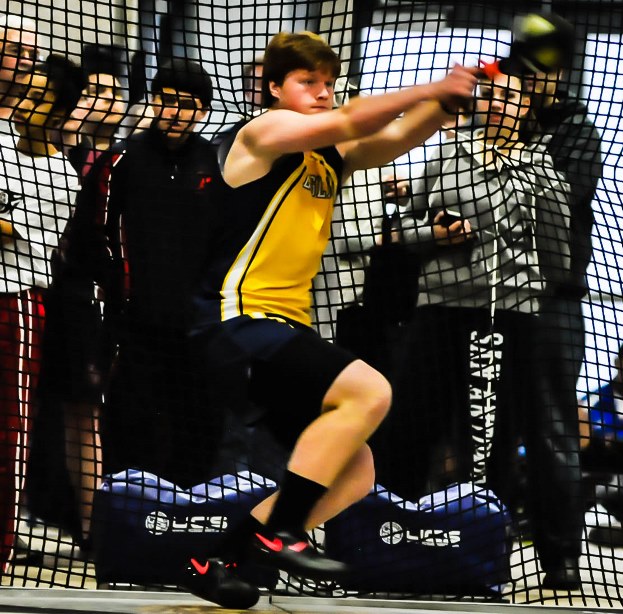