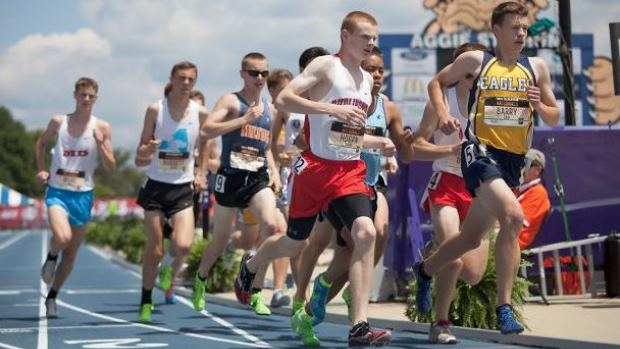 Tom Barry has been an outstanding member of the Barrington cross-country and track teams throughout his high school career, excelling in the middle and long-distance events. As far as the dreaded senioritis, Barry showed no symptoms his final year for the Eagles with PR performances in every event he ran. This past outdoor season, Barry led his team to the Eastern Division title by winning the 1,500- and the 800-meter runs and also running a leg on a pair of winning relay squads. The final two meets of the season, the Colby College-bound Barry ran bests for the 1,600 (4:21.47) at the New England Championship and the mile (4:27.14) and the 800 (1:56.20) at the New Balance National Outdoor Championship.

What would you consider the highlight of your high school career?

I would definitely consider my team’s victory in the Eastern Division Championships this past spring the highlight of my high school career.  Following a dual-meet loss during the middle of our season to a good Portsmouth team, and knowing that we would have to face a tough East Providence squad, we knew that taking the division crown would not be an easy task. However at that meet our entire team stepped up and scored crucial points that allowed us to pull out a victory. Alongside our team’s outstanding performance, I set meet records in the 1500m and the 800m, helped our 4x800 team earn first place and our 4x400 to take second place.

What was your most memorable performance?

My most memorable race performance would have be the freshmen race at the 2009 Injury Fund. This was my first cross-country race ever, and I had no idea what to expect. Before the start of the race, I waved to my parents, and as I was waving, the gun went off. Three or four steps into the race, I was elbowed and fell to the ground. I was shocked, competitors were jumping over and attempting to avoid stepping on me, and the other runners were beginning to pull away from me. I immediately executed a summersault, began to sprint as fast as I could, and eventually came in sixth place.

What was your most difficult obstacle to overcome?

The most difficult obstacle I have ever had to overcome as a high school runner would have to be my challenge of overcoming Osgood-Schlaters disease the summer before my junior year.

What advice would you give to younger athletes?

My advice to younger athletes would be to train smart, work hard, and take care of your body. As long as an athlete fulfills these three tasks, they will be successful.  All athletes can do is push themselves to their limits and put themselves in a position to compete hard and run fast; at the end of the day, there is nothing more they can ask of themselves.

What will you miss most?

I will miss my high school relay teams the most. Some of my greatest high school memories are from competing in relays. Relays are some of the most exciting track events since the lead can change constantly and everyone is responsible for their part of the race. Working as a team to complete a race with some of my best friends in high school will definitely be something that I will miss.

What are your future plans?

This upcoming fall I will be entering my freshman year at Colby College in Waterville, Maine, where I plan on running cross country, indoor and outdoor track.

What influence has your coach (or coaches) had with respect to your performance and overall life goals?

Over the course of my high school career my coaches helped to push me to my limits and motivate me to be my best every single day. Mike Meehan, Michael Katz, and coach Barrass all supported me through the thick and the thin and I cannot thank them enough for their dedication to the Barrington cross-country and track and field programs.

I would again like to thank my coaches, as well as my teammates for all of the time and energy that they have committed to the Barrington running program throughout my high school career. Fellow Barrington seniors Connor Royley and Will Casazza always ran hard in practice and races, and had positive attitudes that always motivated me to run faster. The friendly competition among us made us better runners, and I would like to thank both of them as well as the rest of my teammates over the past four years for making high school running such an amazing experience.