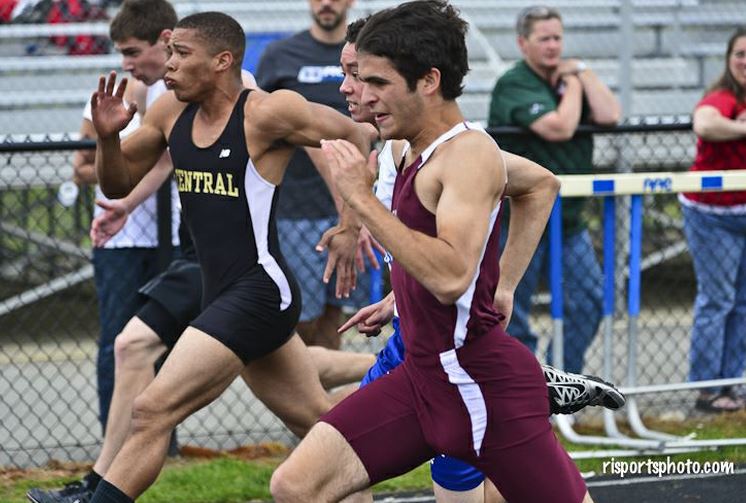 All photos courtesy of Jerry Siberman of risportsphoto.com. Jerry is the offical photographer of the Rhode Island Interscholastic League.

Check out more great photos of the meet and other sporting events at risportsphoto.com.

CUMBERLAND – In the 19 events on the slate, Bishop Hendricken managed just one individual victory and a pair of triumphs in the relay events.

But that’s all it needed to solidify another team plaque at the Class A Championship on Saturday. The Hawks placed in 15 different events with multiple scorers in seven to earn their 36th consecutive title with a 115-93 win over chief rival East Providence at Tucker Field. 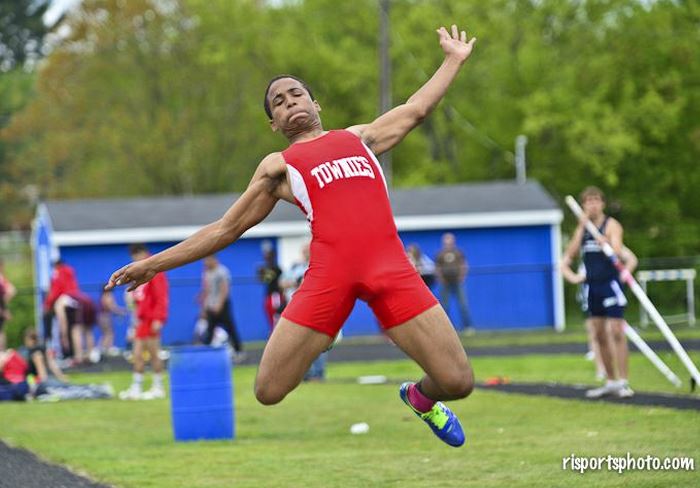 “I actually had it much closer than that,” Hendricken coach Jim Doyle said. “What I didn’t anticipate is we scored in some field events and that got us through.”

Individually, senior Nick DeCiantis had the lone ‘W’ for Hendricken, taking the discus with a toss of 138 feet, 4 inches. Junior Alex Cerbo (46-8) and senior Shawn McAssey (46-8) were 2-3 in the shot put among other top finishes in the field events for the Hawks.

Hendricken, known primarily for its distance runner, snared 28 points from the two sprint events. East Providence junior Ryan Williams continued his dominance with victories in the 100 (10.9) and the 200 (22.2). The Hawks took the next three slots in the 100 with sophomore teammates Lee Moses and Power Kanga finishing second and third and junior John Cute taking fourth. In the 200, Coventry’s Lawrence Warwick was a runner-up, while Kanga and Cute were third and fourth, respectively.

“We have been blessed because the last two years we have had some young men like Power Kanga and Lee Moses that have kind of resurrected the sprinters,” Doyle said. 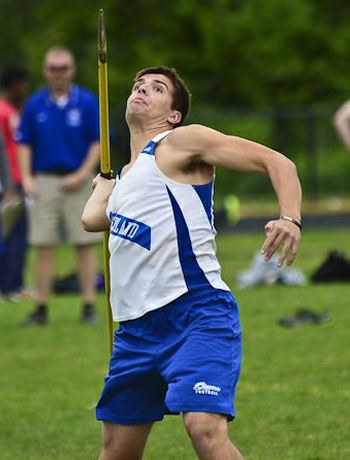 The Townies continued to show their strength against the state’s best. Besides Williams’ heroics, E.P. collected 18 points from senior Christopher Mouro, who was first in the triple jump at 40-0.75 and second in the long jump with a distance of 20-07. Sophomore Trystan Casey was a runner-up in the triple (40-05).

The Townies also got a victory from senior Joshua Rambert in the 300 hurdles (42.6) and a second-place effort from their 4x400 team.

Hendricken will be aiming to win its first state crown since 2010. Just like the indoor season where Classical gave the Hawks a battle to the end, Jim Doyle knows it won’t be easy to earn the plaque. Along with E.P., he lists defending state titlists North Kingstown, Barrington and Classical as possible contenders.

“I think it’s a mixed bag,” he said. “It all depends if we can put everything together; if it’s our day. That’s what it’s going to take in outdoor.”

Kelley took charge from the gun, but Paiva hung on his shoulders as he passed the 400 split in 62 seconds and the 800 mark at 2:06.  The Chariho runner made his move for the title with about 300 meters remaining. Paiva secured second at 4:05.6.

“I had testing this morning,” he said. “I knew I wasn’t going to be in top condition, but I am okay with it. Realistically, I wanted a sub 3:55. I don’t know. I just didn’t feel that fast today.” 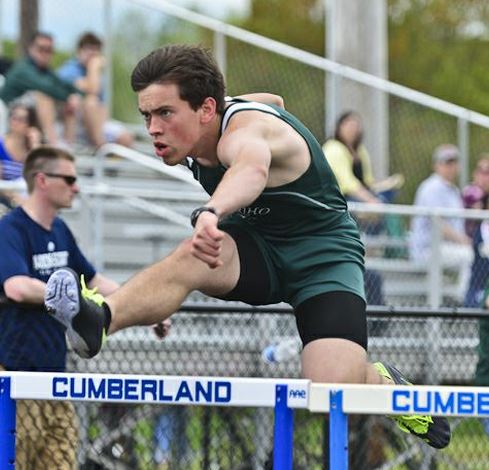 “I am okay with the season so far,” Kelley said. “I am trying to keep it slow at the beginning and really get fit for the championship races. That’s been my goal the whole time.”

Coventry senior Lawrence Warwick also snared two gold medals by winning the high jump with a leap of 6-0 and the long jump at 21-2.25. Warwick nearly won the 200 too, falling just a tenth of a second behind Williams with a 22.3 clocking.

The Knotty Oakers’ Aaron Comery remained undefeated in the shot put with a heave of 51-7. Comery, who won the last two indoor crowns, feels ready to win his first on the outdoor surface.

“I'm satisfied with the win. I am happy I got it,” he continued. “But I know I can do better.”

North Kingstown came close to a sub eight-minute effort in the 4x800 with the quartet of sophomore Ian Connors, junior Zach Emrich, junior Dallin Smith and Craven combining for a time of 8:00.5.