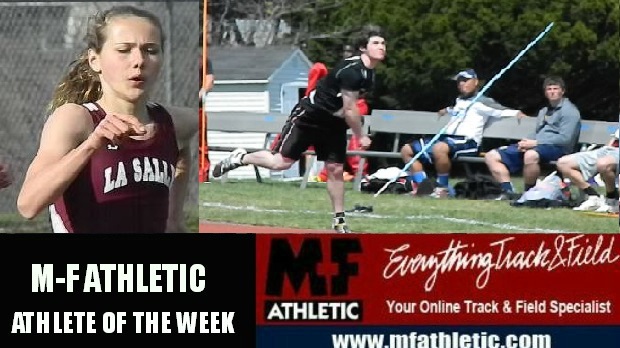 MileSplit RI would like to congratulate Exeter/West Greenwich senior Zachary Hurd and La Salle Academy sophomore Sheridan Wilbur as our M-F Athletic male and female Athlete of the Week (April 22-28).

Hurd, the defending state champion in the javelin, looks like he’ll be tough to beat once again this year. He was just a few inches short of his career best (and 2012 state-winning effort) in a league meet with Prout, Narragansett and West Warwick on April 22, when he had a first-place toss of 186-8. Although he didn’t have his best performance at the Penn Relays this past Friday, he still threw the spear a strong distance of 176-6 against the high level of competition.

Wilbur, a second-place finisher at the cross-country state meet and the 1,500 at the indoor championship, has been clocking some fast, early-season times on the outdoor surface. In a dual meet with Toll Gate and Hope on April 22, Wilbur won both the 1,500 and the 3,000. She ignored the cold and windy conditions and posted a quick 4:50.3 for the shorter distance and 10:14.2 for the 3K. Wilbur owns the fastest time so far this season for the 1,500 with a 4:46.0 time to start the spring.