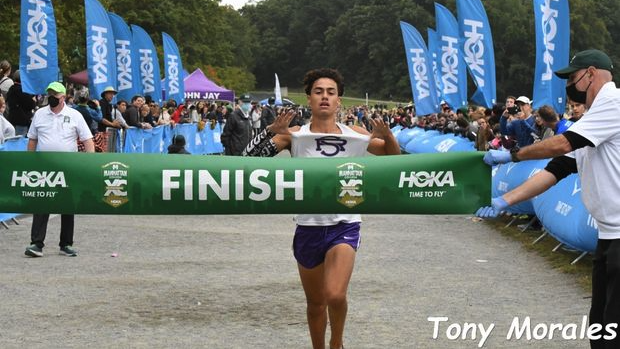 While many high school athletes have already begun their cross country seasons this fall, one runner decided to delay his final season-opener.

Perhaps it's because Devan Kipyego, the talented senior at St. Raphael Academy (RI) -- who's hot off a killer junior year -- looks to break records and make history every time he toes the line.

This weekend was no different.

Racing in the boys championship race, Kipyego flew off the line. He crossed the 800m mark in a blistering 2:08 before, in his words, he "bringing it back" to open in a 4:30 mile.

From there, he separated himself from the pack as he eyed the course record set by Gavin Sherry last year.

His time of 14:58 looked to be within reach for Kipyego, and as he closed down the final stretch he leaned to knock a second off with a final time of 14:57.

Kipyego covered the course in about 4:48 per mile and became just the third Rhode Island athlete to break 15-minutes in the 5K in cross country all-time. He joins this exclusive club with Matthew Bouthillette and DJ Principe, both formerly of La Salle Academy.

Kipyego is now setting his sights on the Manhattan Invitational, where he eyes Edward Cheserek's record of 11:55.4 at the storied Van Cortlandt Park 4K course.

Also in the championship boys race was East Greenwich's Nicholas Martin, who ran a 16:07 for ninth place.

Jackson Borge of North Kingstown and Brandon Piedade of Barrington both placed within the top 20. Other top boys runners included Cole Francis of Narragansett, who was third place in the Varsity 2 race in 16:31.

Rhode Island sophomores swept the JV titles as Barrington's Henry Shultz in JV 1 and Gianni Santagata of Saint Raphael's in JV 2 both came away with the win.

On the girls side, Maddison Dutra of Cranston East ran 19:51 for fourth overall in the Varsity 1 race. Barrington's Kyle Keough and Sophie Gardos placed in the top 11 as Barrington placed second overall. The Varsity 2 race had the most Rhode Island runners with a total of five in the top 18. Rory Sullivan led the way with a fourth place finish in 19:31. Behind her was Narragansett's Maddison O'Neil in 19:33 for sixth, Chandaniey Boyce of SRA who finished ninth in 19:47, and Grace Doyle of Classical placed 11th in 19:53. Mia Barrus of the Lincoln School for Girls took 18th in 20:39.

In the JV 2 race, East Greenwich dominated with three in the top six and took the team title with just 49 points.

The next big races on the calendar are Great American and Manhattan before Rhode Island teams return home for the postseason.