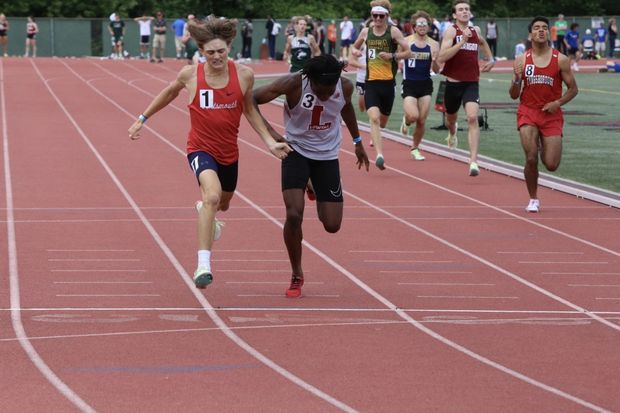 After a brief one-year absence, the New England Champions return. Connecticut's Willowbrook Park in New Britain hosted and saw many of Rhode Island's best come out for the meet. Rhode Island had five winners on the day across boys and girls, with many more All-New England honors.

In the boys sprints, La Salle showed they're a powerhouse on the New England level. In the 100, state champion Jared Gibbons and teammate Jubril Bamgbala qualified as the 9th and 8th fastest heading into the final with both running 11.12. There, Gibbons would take third overall in 11.02 while Bamgbala missed the podium with a 9th place finish. He would, however, get redemption in the 200 with a 4th place finish. His 22.19 came with a -1.3 headwind, an impressive mark given the conditions. The 300 hurdles saw Matthew Stamatelatos of North Smithfield take third overall in 39.16 for a new lifetime best.

In the boys distance events, Portsmouth's Kaden Kluth found success in the 800. After finishing runner-up indoors in the 1500 and 1000 at states, 1000 at New England's, and in the outdoor 800 at states; Kluth was ready to compete. With Devan Kipyego prepping for the Brooks PR, Kluth no longer faced the runner who he had finished runner-up to so many times this year. He took full advantage, winning the 800 title against a loaded field with 9 runners breaking 1:56. His 1:52.48 won him the title by .05, but the vindication of leaving with a New England title caps off his stellar in-state postseason as he gets ready for nationals. This is the second time in a row a Rhode Island runner has won the 800 since 2019 due to Covid, and the second time in a row the state runner-up in RI won the New England 800 title. Henry Dennen of Cumberland also challenged for the New England title in the 3200. After finishing 5th indoors, Dennen stayed in the top group for the majority of the race. He was able to hang on for third against a talented field, and his 9:11.74 is a new Cumberland school record.

In the boys relay events, La Salle and Hendricken's 4x100's squads faced off just as they did at states. La Salle would maintain a steady lead through, but 100 state champion Jarden Gibbons took home the win with a flawless transition to take the title in 42.15 to Hendricken's 42.64. Hendricken's group came even closer to their school record with only one senior graduating from the team. Seven of the eight runners from La Salle and Hendricken's relays return to make for an even more competitive 4x100 battle next year.

In the boys jumps, the high jump saw two Rhode Islanders tie for 7th at 6-3. With identical jumps previously, sophomore Nick Lamoureux of North Smithfield tied with senior Jaden Saunders of Smithfield. Saunders found success in the long jump with a third jump of 22-00.5. This earned him a 6th place finish and All-New England honors. Colby Fahrney of Portsmouth took 8th in 21-07.25. Pole Vault saw state champion Alex DeStefano tied for tenth with a vault of 12-06.

In the boys throws, Woonsocket's Tarik Robinson-O'Hagan took home two runner-up finishes in the discus and shotput. He threw 62-02.75 in the shot put while winner Max Klein of Newton North smashed the facility record by almost a foot with an opening throw of 65-05. Ryan Hazard of South Kingstown placed 5th in the shot put with a final throw of 56-03.75 to earn All-New England honors. He also finished 7th in the discus. The discus saw Robinson-O'Hagan have a similar finish with his final throw of 186-04 securing a second-place finish to Gary Moore Jr. of Hillhouse. Rhode Island found the most success in the javelin, with half of the top 6 from the Ocean State. Maxwell Cute of La Salle won with a throw of 192-10. In third was Adam Dubois of North Smithfield who threw 182. Cute's teammate, Parker Rush, placed 5th with a throw of 177-05. Bishop Hendricken's Cameron Chinn just missed All-New England with a 7th place finish and a throw of 174-04.

The girls sprints saw Ailani Sutherland of Cranston West place 9th with a 25.86. Sutherland placed 10th in the 100 as well and was followed by West Warwick freshmen Xenia Raye who ran the 100, 200, and 400. Raye finished 12th, 10th, and 11th respectively in the three events. Sierra Thompson, 400-meter state champion, finished just .05 from All-New England with a 7th place finish in 58.23. All three runners are currently underclassmen and look primed to be All-New England runners or New England champions in the coming years.

Girls distance saw success in the 800 from the La Salle duo of Caroline Cummings and Lily Borin. The two took 4th and 8th overall earning PRs in the process. Cummings ran 2:11.65 for 4th while Borin took 8th in 2:15.7. Borin won her heat and missed All-New England by under a second.

Rhode Island girls dominated the girls jumps. Morgan Casey of Portsmouth added another New England title for the Patriots and took the win with a jump of 5-07. She beat Conard's Audrey Kirkutis due to Casey going flawless on jumps up until her 3 misses at 5-09. The triple jump saw Jacqueline Edoro of Classical win against a talented field in 37-10.5. This came on her final jump to take the lead for the first and final time in the event. In the pole vault, Rhode Island state record holder Allyson Humphries of Classical finished second with a vault of 11-03.

The girls throws saw Cumberland's Alyssa Yankee take home All-New England honors in two events, the shot put and discus. Yankee took 6th in the discus with an opening throw of 118-02. She followed this up with a 5th place finish in the shot put with a 3rd throw of 38-04.25. Weeko Thompson of Chariho took 7th overall in 37-06.5 in the shot put, and Elaina Furtado-Rahill of North Providence was the top Rhode Islander in the javelin with a 9th place finish in 113-01.