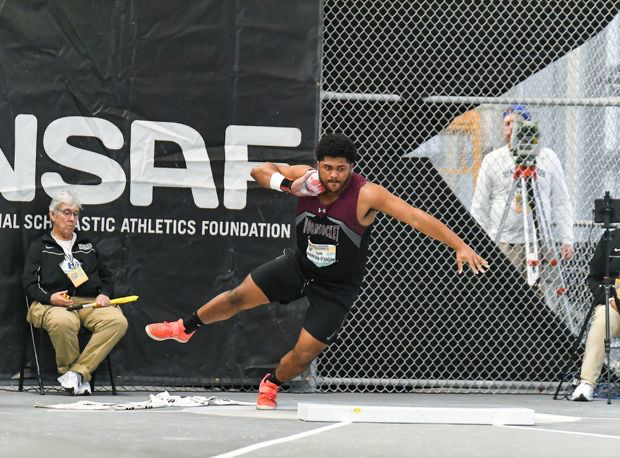 This year, two sets of Nationals were held in New York City as Nike Indoor Track Nationals was hosted at Ocean Breeze Sports Athletic Complex. This saw several athletes diverge from New Balance Nationals meet, and compete for All-American status against some of the best in the country at Nike Nationals. Rhode Island made their presence known in the weight on both the men's and women's sides.

The Boys Championship Weight Throw saw state record holder and Senior Tarik Robinson-O'Hagan of Woonsocket win in 85-0.25 feet, a new personal record by almost 3 feet. He smashed Barrington's graduate Adam Kelly's record of 83-3.25 set at the 2015 Millrose Games. He moves into number 5 all-time for the event. Also securing All American status was Senior Asher Robbins who placed 3rd with a throw of 74-5.75. Senior Liam Capozza of Barrington missed All American just one foot placing 7th with a throw of 68-1.75.

Robinson-O'Hagan was not done for the day, however, as he also won the shot put with a throw of 68-03.25. This was a new meet record and facility record for the Villa Novan. This was his second national championship of the weekend, and he would go on to two more All-American placements across town at New Balance Nationals.

The Girl's Championship Weight Throw saw two more Rhode Islanders place 3rd and 4th to secure All American status. Senior Liangie Calderon of Coventry placed 3rd with a throw of 48-4.75 while Junior Aviana Resendes of Classical placed just 1.5 inches behind her in 4th with a nearly two-foot personal best of 48-3.25.

In the SMR, Portsmouth achieved All American honors running 3:31.11 for 4th overall. The team of Colby Fahrney, Thomas McGraw, and John Maedke passed the baton to Senior Kaden Kluth in 9th, but he split the fastest 800 in the race running a blazing 1:52.4 anchor leg to set a school record.

In the championship mile, Cumberland Senior Henry Dennen was slated to run the mile against Kluth who was doubling back from the SMR the previous day. Both runners faced off. After a fall in the opening 50 called everyone back to the line, Dennen split 4:00.76 to Kluth's 4:01.42. This placed 4th and 7th with 100 meters to go. The Rhode Island runners went on to finish within .03 seconds of each other with Dennen holding onto 5th in 4:17.01 and Kluth 6th in 4:17.04. This was Kluth's second All-American honor of the weekend. 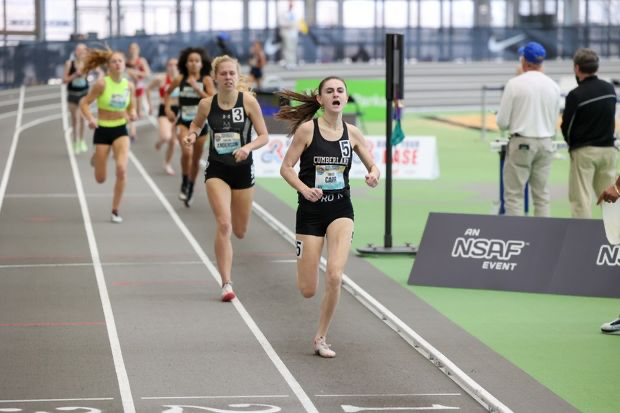 Dennen's teammate junior Grace Carr broke her school record by placing second in the Girls Emerging Elite 800 in 2:19.36. Also placing well was Brandon Piedade of Barrington. The junior placed 4th in the 2 mile with a blistering 9:25.16 2 mile. The improvement shown by Piedade makes him a serious threat in the 3k this outdoor season. 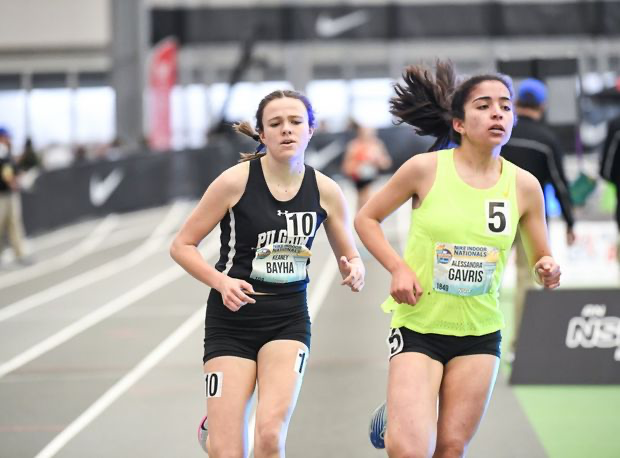 Rhode Island runners took home 2 national titles, and 11 All American honors between nine individuals. This outdoor season looks to be extremely competitive, especially in the distance and throwing events.