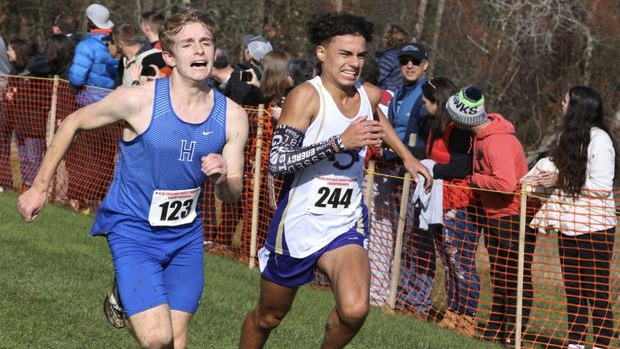 Devan Kipyego, the defending state champion, went out in group two as planned and made moves throughout the race. He came away with an 11th place finish in 16:50. He was followed by Troy Silvestri of Bishop Hendricken and Jackson Borge of North Kingstown who both ran 16:55. After them, Adam Thibodeau and Jack Casey of La Salle came in with Classical's Nicholas Mott separating them. They ran 17:04, 17:05, and 17:06 respectively.

Cooper Michaud of Classical was 30th overall in 17:17, and Cole McCue of Cumberland was 33rd in 17:19. The race's first five spots were taken by Connecticut runners as Gavin Sherry, Aidan Puffer, and Callum Sherry took the top three spots in the meet.

East Greenwich's Reese Fahy, teammate Rylee Shunney, and Moses Brown's Sophia Gorriaran were the top 3 finishers at states but did not attend New England's. The three would have been All-New England, and Reese was a favorite to win an individual title along with Ruth White of Orono High school in Maine.

With this, the fourth-place finisher, Caroline Cummings of La Salle stepped up to place 12th overall. She was the top Rhode Island athlete, and the only athlete to obtain all New England honors. Rory Sullivan of North Kingstown was 1 spot off in 26th, and Erin von Housen of Chariho was 39th overall. Cracking the top 50 were Freshmen Kiley DeFusco of Cumberland, and Molly Sullivan of North Kingstown. La Salle Academy was also the top team from Rhode Island in 6th, and State Champion North Kingstown was 9th overall.

With New England over, teams look on to Footlocker and RunningLane where we could see several teams and individuals attempt to make their mark on the national stage.