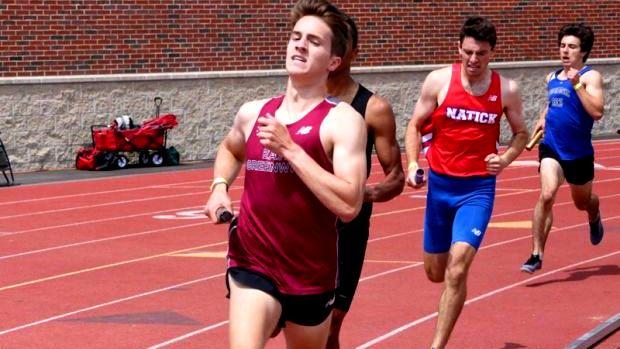 According to the four members that comprise its two-time state champion 4x800-meter relay squad, East Greenwich didn't run to its full potential at Saturday's New England Championships. In their minds, there's still plenty in the tank for next weekend's New Balance Nationals.

With that being said, it appears their lofty goal of a possible assault on the state record is more of a reality for these talented Avengers.

Despite coming short of its' expectations on the campus of the University of New Hampshire, East Greenwich went home with a dominating victory at the regional competition. The foursome of Colin Cianciolo, Jeffery Pedersen, Quentin Viera and Cebastian Gentil cruised to a winning time of 7 minutes, 46.37 seconds (US #15). East Greenwich was nearly 10 seconds ahead of second-place Xavier (CT), which was timed in 7:56.22.

"I feel like we could have run faster," said Gentil, the Avengers' anchor leg. "We had slow splits. The second lap felt a little slow on my part, but it's a good warm-up for next week."

"We definitely can do better than that," Viera said. "There is no question that we are all capable of running faster."

The state record that East Greenwich will be eyeing at Saturday's championship race (7:30 p.m.) at NBN is the 2014 mark of 7:37.62 by North Kingstown from the outdoor nationals.

East Greenwich wasn't the only one to strike it rich at the New England's. Rhode Island athletes claimed two other gold medals along with a pair of runner-up finishes in the six-plus hour meet.

Portsmouth junior Nikki Merrill captured the 800m run with a time of 2:11.52. Merrill trailed eventual second-place finisher Emily Phillippides of Greenwich (CT) in the early stages of the race and broke for the lead around 300m. She then had to hold off Phillippides (second, 2:11.78) down the final straightaway to earn her second New England title this year. She was also the indoor 600m champion.

Central's Gus Karweh won his second New England crown in as many seasons in a very-competitive high jump. Karweh had a winning leap of 6 feet, 7 inches, the same height cleared by the next five finishers in the field. The Knights' senior also was the NE indoor champion.

Westerly's foursome of Elizabeth Letizio, Jaime Murray, Randi Burr and Abiageal Keegan placed second in the 4x800m relay. The Bulldogs improved on their state No. 1 from last week's RI State Meet by nearly 14 seconds with a time of 9:20.59.

Rogers' freshman Ian Hall was second overall in the javelin with a throw of 185-2. That distance ranks No. 2 nationally among all ninth-graders.