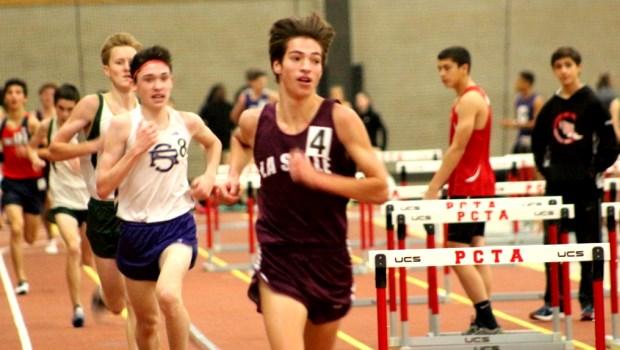 How impressive was Reiily Johnston's victory in the 3,000-meter run at Saturday's RITCA Invitational?

All you had to do was look at the reaction of the St. Raphael Academy junior's coach, Chris Magill, as Johnston kicked past front-running Domenic Campagna of La Salle with less than a lap remaining and then powered through the finish with a big-time PR for the 15-lapper. Jumping in the air, screaming and first-pumping, Magill watch his star runner break the tape in a state-leading 9 minutes, 2.77 seconds. Reilly's previous best on the indoor surface was his 9:34.13 effort from a league-meet win on Dec. 18.

"I didn't really have any expectations for a time," he said. "This was kind of the first big race of the season, so I wanted to just get out there and maybe set a PR. But I wasn't expecting that."

As expected, the girls' 3,000m turned into a three-person race with La Salle teammates Grace Connolly and Emily Kane and Westerly's Randi Burr separating themselves from the pack early and rattling off consistent 200m splits between 40-41 seconds. Connolly put on a surge with a little more than a lap remaining, and had about a 20m gap on Burr with 150m left, but the Bulldog runner never gave up and with one final kick down the final straightaway was able to edge Connolly at the line with a winning time of 10:18.86 to Connolly's 10:18.96 effort. Kane settled for third in 10:28.52.

Cebastian Gentil of East Greenwich, last year's 600m state champion, moved up a distance at Saturday's meet. Competing in the seeded section of the 1,000m, Gentil cruised to a winning time of 2:35.87. The Avenger junior was 61 seconds after the first 400m and was 2:04 by 800m. His performance ranks among the top 20 nationwide.

Portsmouth's Nikki Merrill captured the girls' 1,000m with a time of 3:00.90. Merrill took control from the start and passed her opening 400m in 68 seconds. She was followed across the line by Burr, who was second at 3:03.68. Portsmouth's Elizabeth Sullivan finished third in 3:06.08.

In the sprinting events, La Salle's Tyler Lamonte was the first across the line in the boys' 300m dash. He clocked 37.73. Laura Murphy of East Greenwich won the girls' 300m with a time of 42.81. Classical's Jehlani Galloway (6.60) and Central's Alyejah Roderick (7.64) won their respective 55m dash races.

Defending state champion Chris Choquette won the closest race of the afternoon by taking the 55m hurdles. Choquette nipped East Greenwich's Connor Sheridan at the line with both timed in 7.86.Two-time state titlist Tereza Bolibruch took the girls' 55m hurdles with a time of 8.69..

Lincoln's Garrett Doyle heaved the shot a winning distance of 53-4. He was also second to Classical's Jacob Furland in the 25-pound weight with a distance of 66-5. Furland won with a toss of 67-11. Ponaganset's Gianna Rao took the girls' weight by more than 10 feet with a 59-7 effort. That distance currently ranks No. 2 in the country.