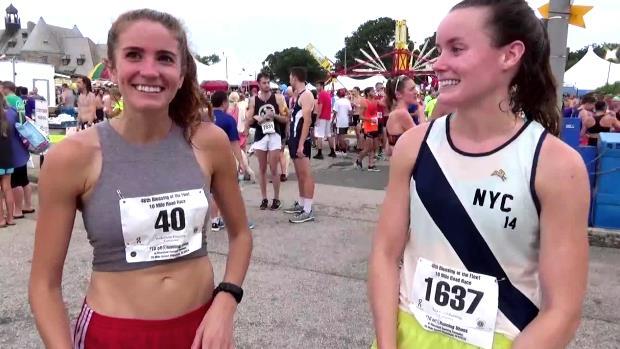 Jeanne Mack was back in her element.

It's been nearly a decade since the former La Salle Academy standout was winning state and New England title as distance ace for the Rams. Once she graduated, she enjoyed a successful four years at Harvard University.

The now 27-year-old Mack, who resides in Arizona, was back in R.I. on Friday and among the nearly 2,400 participants at the annual Blessing of the Fleet 10-Mile Road Race. And just like in her heyday, she was front and center by the time she crossed the finish line. Taking control as she reached the sixth mile on Rte. 108, Mack cruised to the individual crown with a time of 1 hour, 1 minute, 7 seconds on the scenic out-and-back course. She was 29th overall.

"I am definitely happy," said the 2008 La Salle grad. "I ran this race in college a couple of times as like a fun, training run. It was good to come back and take it a little more seriously."

Mack took a somewhat patient approach, except for maybe the opening mile on South Pier Road.

"I think I was the first girl for the first mile because I have a terrible habit of crushing it from the start," she said. "Then I realized I should slow down a bit...(O'Neil) led between mile two and mile six. I was just a little bit off her. I think I realized then that I was already halfway done and was feeling good and I still have something left in the tank."

Winning the men's crown was Pennsylvania native Zach Hoagland, who was timed in 53:48. Former Hendricken all-stater Nick Celico took runner-up honors in 54:26. He was followed across the line by Eric Lonergan of North Kingstown in 54:41. Jacob Magiera (fourth, 56:12) and Joe Farrand (fifth, 56:20) rounded out the top five. 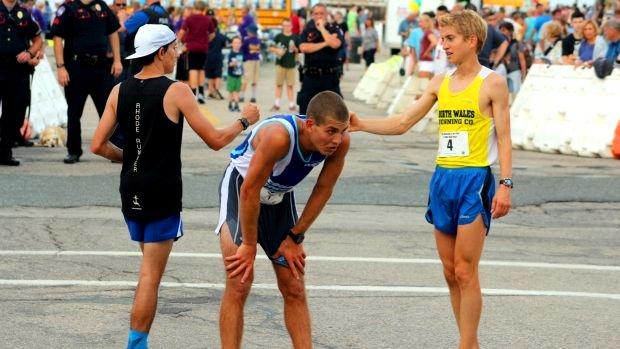 Hoagland essentially held the lead from the starting line, which was a short distance from Narragansett Pier School.

"To be honest, I didn't know who was in (the race) so I was just going to go out in the pace that I felt comfortable with, that I did in previous years, and see where it took me," he said. "I ended up going to the lead at the gun and tried to hold on from there."

Celico and Lonergan maintained their positions throughout the 10-miler. The ex-Hawk runner was able to distance himself from Lonergan in the closing miles.

"Initially, I wanted to use this as a long tempo and keep 5:30 pace as long as I could," Celico said. "The last two miles I got a second wind."

Among the top 10 were a trio of past and present La Salle runners. Crossing the line together in eighth and ninth, respectively, were 2016 graduates Alex Campagna and Matt Bouthillette, who both registered a time of 57:59. Max DiMuccio, a sophomore-to-be this fall season, was tenth overall in 58:46.

Seven-time champion Matt Pelletier was 53rd overall with a time of 1:03:01. Pelletier, who is one of the state's all-time great marathoners, retired from competitive running earlier this year, shortly after him and his wife, Jill, welcomed their baby boy, Rowan, to the world.

Toll Gate track and cross-country coach Norm Bouthillier, 52, who has been recovering from an injury, was second in the senior category with a time of 1:04.52, good for 74th overall.