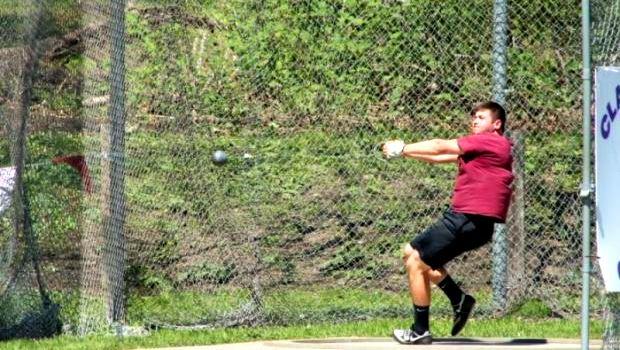 For most top hammer throwers, the big milestone to achieve before the time they graduate is 200 feet, which is rare territory for most in one state. Except, maybe, Rhode Island this spring. In the Ocean State, there's potential for at least four, possibly five, to exceed that distance!

The person to chase, of course, is Jared Briere. The Woonsocket High senior and 2016 state runner-up is our No. 1 returnee. He tossed  more than 200 feet multiple times last year, including his PB of 208-1, an effort that placed him second at the New England Championship. Briere is coming off an indoor season where he won his first individual state title, earning gold in the 25-pound weight. At the New Balance Nationals, where he finished sixth overall and attained All-American status, Briere indicated he's hoping to move up on the all-time list in the hammer.

Who are the other potential 200-footers and top contender in this event?  Briere's two teammates, Dilyn Cote and Jacob Greenless, will certainly figure in the mix. The Villa Novan trio finished 1-2-3 at the indoor states, and have the possibility of doing the same on the outdoor surface.  Cote was third at last year's meet and exceeded 200 feet in the off-season with a 200-1 best at the USATF National Championships in late June where he also placed third overall. Greenless finished seventh in that meet where he had his all-time best of 185-4. Central's Adrian Matos is another top contender. He was fourth at the State Meet and won the Central Division Championship with his PB of 197-1. At the New Balance Nationals, he captured the Emerging Elite division of the hammer. Classical's Zeke Cohen, who just missed out on a podium placement at last year's states by taking seventh overall, is also an athlete to keep an eye on. He enters this season with a PB of 188-11, a distance that earned him a fifth-place finish at the New England meet.

There's potential for at least a half dozen athletes to crack 50 feet in the shot put. Right now, the top contenders for prosperity at the June 3 State Meet are the only athletes among the bunch that have already reached that milestone, defending state titlist Ivan Goretoy of West Warwick and Kwity Paye of Bishop Hendricken. Goretoy will be looking to make it three in a row in his specialty. Besides winning an individual title last spring, he also claimed the indoor crown this winter where he tossed his all-time best of 50-11.25. Paye placed second to Goretoy at the indoor states and finished the season with a PB of 50-6. This is an event that should be very competitive. Four other shot-putters have tossed a distance of 48-10 or further - Lincoln's Garrett Doyle (49-5.5), Classical's Jon Buchanan (49-8.5), Lincoln's Evan Grivers (48-10.25) and Hendricken's Xavier Truss (48-10).

The javelin is another event that could be crowded up front. The top four returnees are separated by a little more than four feet! Hendricken's Connor Sheridan is the No. 1 contender. He was second at the State Meet last year where he heaved a PB of 153-6. Right behind him is Ponaganset's Marco Russo, who was eighth at the states and finished the season with a best of 152-5. South Kingstown's John Gibbons, who was the only other underclassman to make it to the podium besides Sheridan last year's State Meet with his sixth-place finish, has also done 150 feet. He won the Class B title with a toss of 151-6. Scituate's Dylan Allhusen is another athlete that can make things interesting. He comes into the season with a best of 149-3, which he did to place fifth at the Schomp Invitational.

The discus features the 1-2-3 finishers from last year's State Meet - Greenless, Goretoy and Hendricken's Evan Storti. Greenless won the title by just five inches over Goretoy where he had a PB of 142-6. Storti was third with his best of 141-5. Westerly's Derek Jacobs finished the season with the top throw among all returnees with his 145-0 winning effort from the Classical Classic. Goretoy had the next best of 143-0, a performance that placed him first at the Southern Division Championship. Johnston's Kyle Nelson (142-11) has also gone further than 140 feet. In other words, it's anybody's guess who will come out on top in a few months.