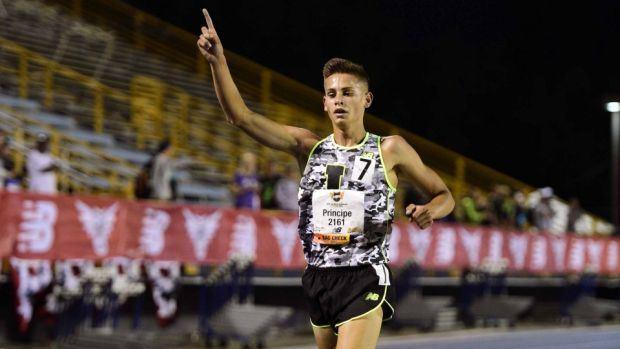 With pacers and top collegiate and professional runners on the starting line, meet officials of the New Balance Games are hoping to see another talented schoolboy athlete break the magical four-minute mile, a feat that only a select group of runners have ever accomplished.

But Saturday's race is more than that for DJ Principe. Whether or not the La Salle Academy senior dips under four minutes on the banked oval of the New Balance Armory this weekend, the fact that he has this opportunity should be looked at as an historic event, a memorable time for Rhode Island high school athletics.

The Stanford-bound runner has already made us proud by what he has accomplished throughout his outstanding career at La Salle. He's earned national titles, both individually (outdoor 5K, 2016) and as a member of a relay team (4xMile, 2015). He's also won his share of state crowns and was part of an unbelievable DMR squad that came inches from snaring the coveted wheel at last year's Penn Relays Carnival.

DJ has already accomplished what most runners at his level have not. Now he's going for something that very few have ever done. Now he has a chance to add his name to a short list of high school runners that have broken four minutes for the mile.

It's not an easy task. In fact, it's a very, very difficult one. In the history of high school track & field, only nine runners have ever broken four minutes; nine runners out of the thousands and thousands that have competed over the last 50-plus years! Most runners at DJ's elite level, no matter how many signs are pointing in the right direction, have never done it. EVERYTHING needs to be in sync for this amazing feat to happen. Remember, every 200-meter split has to average under 30 seconds, every 400m split less than a minute. If you are a runner, you certainly can understand just how fast that is. There's a reason that even some of your top collegiate runners have never been able to hit this running milestone.

On Saturday afternoon when the gun is fired at 2:55 p.m., there is a good possibility that DJ will break four minutes. He's put in the work and has shown he has the potential to make it happen, especially after his near-solo 4:04 effort at a BU Mini Meet on Dec. 31, a performance that caught the eyes of the New Balance officials. If he feels good and his race falls into place, DJ could become the tenth member of that exclusive sub four-minute club. There is no doubt he deserves it!

But we have to remember that if he doesn't, it's STILL a memorable time for Rhode Island athletics. The fact that he is in this position is STILL an appropriate reward for all that he has done throughout his career at La Salle Academy.