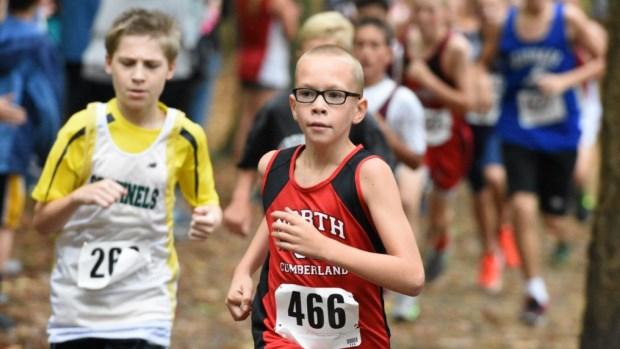 North Cumberland not only swept the team titles (junior varsity, varsity), but also claimed the individual crowns, too. Ethan Carpenter led the boys, breaking the tape with a winning time of 10 minutes, 5 seconds for the 3,000-meter course. Carpenter, who is just a seventh-grader, was 25 meters ahead of runner-up, Alexander Maxwell of Cole Middle School in East Greenwich, who was timed in 10:11.7. De La Salle's Jack Casey, a Cumberland resident, was third in 10:22.5.

With all five of its scoring runners among the top 12, North Cumberland defeated second-place Cole, 34-87, for the team crown. Smithfield's Gallagher was third with 118 points.

In the girls' competition, Olivia Belt, an eighth-grader, posted a five-second victory, crossing the line at 11:32.6. Finishing second was Tess Gagliano of Barrington in 11:37.9. Lily Borin of Scituate was third at 11:58.2.  Megan Huntley, a sixth-grader from Cole, placed fourth in 12:00.8.