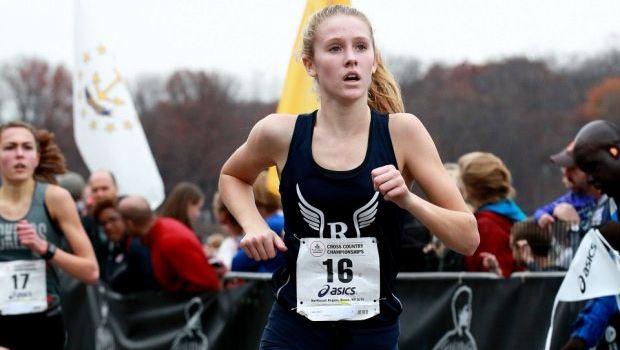 "What a great way to end a long, but fun, cross-country season.''

With that, Ellie Lawler, South Kingstown High's talented "long ranger'', prepared this week for a trip to San Diego, California, and the annual Foot Locker National High School Cross Country Championships. The races, staged at the city's Balboa Park, showcase the top individual male and female prep harriers from around the United States; all of whom made the top-10 cut at their respective regional qualifying races.  Lawler's eighth-place showing (17:57) at the Northeast Regional on the hilly Van Cortlandt Park course in New York City last month was good for an automatic bid to the San Diego event.

Lawler indeed has enjoyed a successful fall campaign. She clocked a course record 17:29.28 to gain the laurel wreath, and collect a Coaches Association first-team all-state honor. The following week, on a challenging course at Thetford Academy in Vermont, Lawler finished as New England runner-up (18:32.) On an equally tough 3.1-mile route in Manchester, N.H., Lawler again finished high: third place in 18:27. At last year's Nike Team Championships in Portland, Ore., Lawler placed 33rd among individual finishers. Her '15 performances were unsurprising, considering how well she did as a freshman the year before. At the 2014 State Championship on the Ponaganset High "Covered Bridge'' course, Lawler placed third in 18:03.

"Ellie is a focused runner who sets her standards high,'' said Sherry Hathaway, the Rebels' coach. "Whether it's at practice or meets, she always comes mentally prepared to give one hundred percent. For s sophomore, Ellie is an extremely poised and intelligent runner.

"I'm not only impressed with her work ethic,'' Hathaway said, "but her sportsmanship and teamwork. Ellie learned a lot from her experience at the Northeast regional, and is excited to represent Rhode Island at the Championships. She's a pleasure to coach.''

"My coach and teammates have been so helpful and supporting this entire year,'' Lawler said. My coach, having years of experience, was able to make a training program that worked well for me. [She] provided me with just the right amount of interval training that helped me to peak at the right time of the season, and gave me the endurance to continue running strong into December.''

Lawler is well aware of the challenges she'll face this Saturday.  "I know that I have my work cut out for me heading to San Diego, but I'm going to enjoy the wonderful opportunity. The competition at the Northeast Regional race was definitely some of the fastest I have ever raced against. I look forward to . . . running strong at Foot Locker.''

Genesis of the event,  and Rhode Islanders who participated

The races began in 1979 as the Kinney National Cross Country Championships, sponsored by the Woolworth Company's Kinney Shoe Division. In 1993, the race became known as the Foot Locker Championships, for Woolworth's sporting goods company.