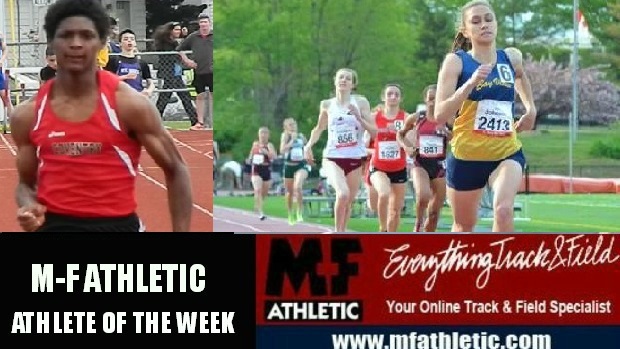 MileSplit RI would like to congratulate Coventry High senior Lawrence Warwick and Bay View Academy senior Erica Johnson as the M-F Athletic male and female Athlete of the Week.

Warwick rarely takes a breather whenever he’s at a meet. He excels in the jumping events and sprints, often competing in at least four events for the Knotty Oakers. He was a state runner-up during the indoor season in the high jump, long jump and the 55-meter dash. The versatile Warwick had a typical afternoon at Saturday’s Classical Classic, winning the high jump (6 feet, 2 inches), the long jump (19-11.75) and the triple jump (41-7.5). He is currently tied for No. 1 in the state in the vertical leap.

Since she was a freshman, Johnson has been one of the top runners in the state from the 400 to the 800. She is a four-time winner of the 600 at the indoor state meet and copped the 400 outdoor title as a sophomore. Johnson appears to be in form to finish out her outstanding career with another individual crown (or two). This past weekend, she finished third among a talented field in the 800 at the Glenn D. Loucks Games in White Plains, N.Y. Johnson crossed the line with a personal-best time of 2 minutes, 11.35 seconds. She was also eighth in the 400 with a 57.82 clocking.