PROVIDENCE – The early-week forecast for Saturday’s Knights of Columbus 4x1 Mile Relay called for mild weather in the mid-50s.

Guess what? It was wrong.

The athletes that gathered at Mount Pleasant High's Conley Stadium for the 45th annual event were greeted with near-freezing temperatures and a stiff headwind.

“We had a dual meet here Tuesday and it was like 38, 39 degrees with the wind,” said Bishop Hendricken coach Jim Doyle. “I told my guys, listen, Saturday the forecast is 55 degrees and no wind. When I got up this morning it was 38 degrees and the wind was actually blowing harder today than Tuesday.”

Ignoring the unfavorable conditions, Doyle’s Hawks captured one of the featured races of the day as the quartet of senior

Hendricken trailed its closest rivals for the first two legs of the relay. Spurred by a 4:38.1 leg from Henesler on the third exchange, Hendricken took the lead for the first time with a little more than a 1 ¼ remaining. With a comfortable five-second cushion, Tierney extended the advantage to nearly 100 meters by the finish.

“We just told them to try and stay in the race and run as well as you can; try to stay behind someone and wait to the end when it counts,” Jim Doyle said. “I told my first two guys to kind of stay close. Doherty is just coming off an injury and he ran a 4:45 and Connor ran a 4:41. He was coming off an illness. They kept us in the race and Tyler caught us back up and gave us a lead and Tierney ran a 4:36 as the anchor.”

Tierney opened up his mile leg with a 400 split of 62 seconds.

“That was his plan, to try and extend the lead. He knew he could do that and just hold on the rest of the way. That’s what we wanted him to do,” said Doyle, whose squads have won 17 Div. I titles in the meet’s history. “Considering the conditions, I am happy with the way they ran.”

The Barrington foursome of Tom Barry, Luke Bledsoe, Will Casazza and Connor Royley combined for a time of 19:13.7 to take the Div. II crown, easily defeating second-place Burlington, Mass. (19:57.8). Alex Conway, Ian Kelly, Henry Dodge and Even Greenfield of Bishop Feehan won a close race over East Greenwich in Div. III, posting a winning time of 18:53.7 to the Avengers’ 18:58.4.

La Salle claimed its fifth title since 2006 in the girls’ competition with the team of freshman Eliza Rego, senior Caitlin Marino, junior Caroline Falvey and sophomore Sheridan Wilbur holding off Bishop Feehan with a time of 21:51.0. The Shamrocks took runner-up honors with a 21:59.2 effort.

“Considering today’s conditions, I thought the times were pretty fast,” said La Salle assistant/distance coach Kelly Martin. “It was very windy, very cold and I don’t think any of the kids are really prepared for this type of weather. I am happy with their times.” 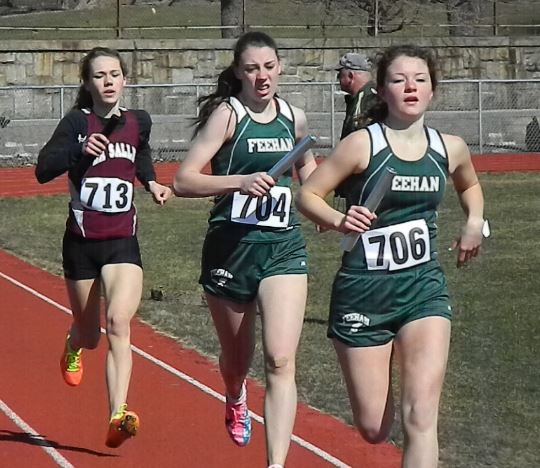 “I just wanted them to get the first-race jitters out of the way,” Martin admitted. “The point of this (meet) isn’t to see what their mile times are at this part of the season because it’s so early. It’s just to see what we need to do for the rest of the season.”

East Greenwich copped the Div. II crown with the team of Meg McCarthy, Kaley McMillan, Emily Browne and Thedita Pedersen combining for a time of 24:25. St. Raphael Academy was a distant second at 24:54.

The K of C meet also features a hammer throw, freshmen mile and a Special Olympics 4x400 relay. In the hammer, two of the leading contenders at the state level  this spring for boys and girls won their respective titles.

Barrington senior Charlie Ionata had a more than six-foot personal best to snare first place for the boys with a school-record toss of 222 feet, 4 inches. Ionata beat a talented field that included three other throwers over 200 feet. Finishing second was Central’s Clarence Gallop (208-6). Barrington’s Adam Kelly was third (203-3) and Central’s Carlos Mangum was fourth (202-4).

“It was pretty good,” Ionata said. “Opening the season with a PR is always good. It feels great. I would have liked to have thrown a little further, but it’s a cold day. I had to hold back a little bit.”

Ionata, who won his first individual state title this past winter with a victory in the 25-pound weight, has high hopes in the hammer his final season at Barrington.

“I would like to go over 240 (feet),” he said. “That would be the goal for the end of the season.  Two-hundred and fifty-three is the state record. That would be amazing to get but I would be pushing it a little bit.” 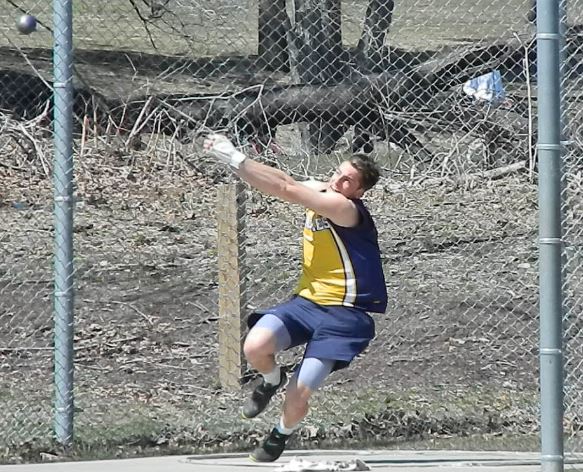 Classical senior Marthaline Cooper copped the girls’ hammer with a toss of 146-2. She edged Narragansett’s Leia Mistowski, who was second at 145-0. Portsmouth’s Abby Cousens was third at 142-3.

Cooper captured her second straight title in the indoor weight this past February. In 2012, she was fifth in the hammer at the New England Championship after finishing a disappointing 14th overall at the outdoor states.

“It was a little tough (today),” she said. “Yesterday (in a dual meet with La Salle and Warwick) it was beautiful and I PR’d by 16 feet from last year with 158. I was hoping to do 160 today. I don’t know if it’s the early morning or the wind, but hopefully I’ll do better next time.”

Cooper is excited about the upcoming season.

“Indoor season I love all the time. Outdoor has usually been more of a struggle,” she said. “This year it hasn’t been as much a struggle because I have gotten a lot stronger and my spins are a lot better and I am just a better athlete overall. I am really looking forward to this season. My goal is 180 (feet) for the hammer. I think I can hit that at the end of the season. “

Marissa McPhillips of Narragansett was the first to cross the line in the freshmen girls’ mile with a time of 5:36.2. Mount Hope’s Karina Tavares was second at 5:37.2. Rounding out the top five were Bishop Feehan’s Meg Carmody (third, 5:37.5), Lincoln’s Amanda L’Esperance (fourth, 5:38.0) and Cumberland’s Amy Laverty (fifth, 5:45.4).

McPhillips hung back behind the leaders until the final stretch where she demonstrated a strong kick to snare the win.

“It’s been a tough couple of weeks. I swim in the winter so coming back and running again has been difficult,” said McPhillips, who also competed in cross country for the Mariners. “I was really nervous today. I just wanted to stay in the pack and have enough at the end.”

Harry Malloy of St. John Prep in Danvers, Mass., captured the boys’ frosh mile with a time of 4:50.7. Bishop Hendricken’s Avery Ingenen was second with a 4:51.9 clocking and Jack Ennis of St. John's solidified third, running 4:55.6.