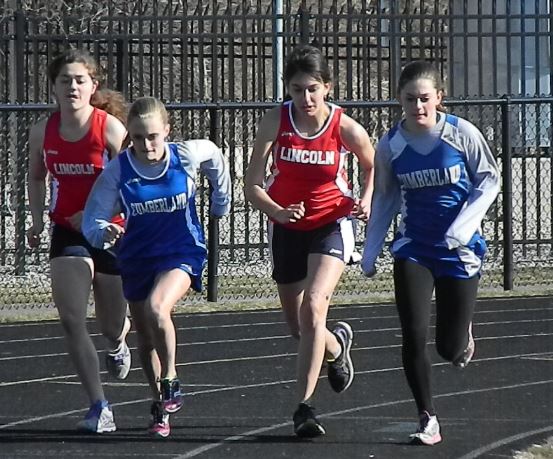 CUMBERLAND – Records are rarely broken at the start of the season.

For most coaches, the initial few meets of any season are primarily used as a way to gage the type of a talent that they have on their respective teams and for their veteran members it’s an opportunity to get in some quality competitive work before the bigger meets down the road.

That’s all that mattered Wednesday afternoon where, under frigid and windy conditions, host Cumberland High swept both the boys’ and girls’ meets in a Northern Division opener with Lincoln and Central Falls at Tucker Field.

Cumberland coach Tom Kenwood limited the amount of events for his athletes, but still saw his Clippers easily defeat the Lions, 107-47, and the Warriors, 144-10. First-year CHS girls’ mentor Vanessa Malloy watched her squad down Lincoln, 108-46, and C.F., 111-24. 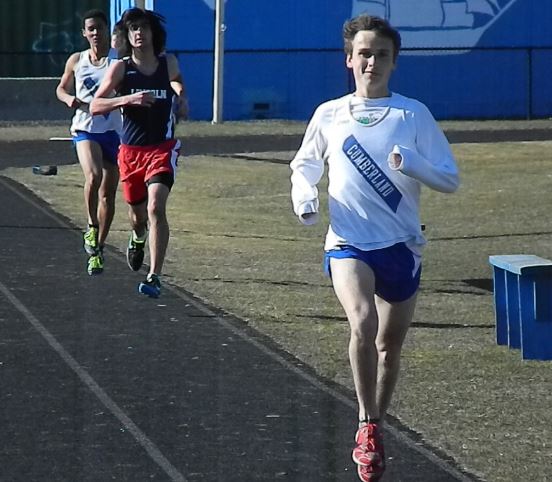 “Our goals this year are to do well in the dual meets and in the divisionals and then after that try and qualify as many kids into the state meet as we can,” stated Kenwood, whose teams have won 15 straight league titles since 1998, posting an impressive 134-2 record during that span.

Sophomore Matt Feng was a multi-winner for the Clippers, earning gold in the 100-meter dash with a time of 11.9 seconds and the 200 with a 24.2 clocking. Feng also ran a leg on the first-place 4x100 relay of Zach Mobrice, Tyler Mobrice and Kyle Courtney that posted a time of 47.5.

The 4x100 relays and the boys’ javelin were the only events that were completed on the meet’s original day of Monday where threatening skies and steady rainfall forced Kenwood to postpone the meet until Wednesday.

In the javelin, Cumberland senior Trent Vasey heaved the metal spear a distance of 152-1. Vasey registered a personal best despite a strong headwind.

The Clippers’ Trevor Crawley, the defending outdoor champion in the 3,000 and the recent indoor 3K titlist, looked relaxed in coasting to a win in the 1,500. Crawley never relinquished the lead from the start and broke the tape in 4:29.6. Lincoln senior Jacob Palladini was second at 4:33.5.

Ignoring a stiff head wind on the backstretch, Kyle Courtney won the 400 for the Clippers with a time of 55.3. The junior and first-year runner also anchored his team’s victorious 4x400 relay squad that combined for a time of 4:13.8.

Kenwood feels the potential is unlimited for Courtney, who plays soccer during the fall season.

Erik Mateo of Central Falls, the indoor high jump champion, demonstrated good form to cop his specialty with a leap of six-feet even. He was also the first across the line in the 300 hurdles with a time of 46.5. 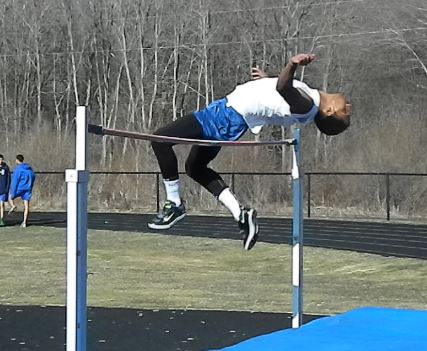 In the vertical leap, Mateo made all his attempts on his first try.

“We are looking for him to win the outdoor states. That’s the primary goal,” said C.F. co-coach Brendan Lamboy. “What we did today, after he cleared six feet, we went right to 6-3 so that he could try and qualify for nationals. That’s the other thing we are going for. That would be a personal best for him. His best is 6-2 and 6-3 would qualify him for (Emerging Elite) at the nationals.”

According to his coaches, Mateo’s dedication has been a big reason for his success.

“Erik was dedicated the moment he realized he found that he could do well at the high jump,” said C.F. co-coach Ernest Fennell. “He has perfect attendance. He is here every day and he works hard. He’s motivated. He’s a leader on the team. He’s eager to make sure that he is successful and the team is successful.”

Barger never trailed in taking her event with ease. Laverty captured her first track race since bursting on the scene during the cross-country season with an outstanding seventh-place finish at the state meet. She won a back-and-forth race with Lincoln’s Laurel Scott. Scott finished second at 5:24.0. 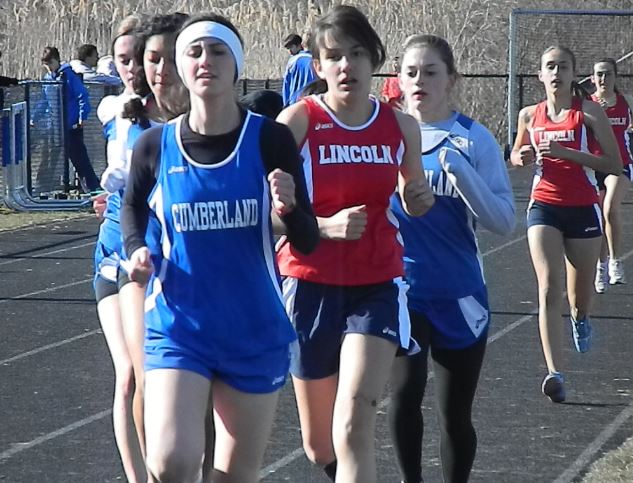 “I was a little bit nervous in the beginning because I never ran a mile around a track before,” Laverty said. “I felt tired in the middle of the race but I kept pushing through.  The wind really affected me a lot, but I managed to keep my pace and I felt good at the end and I sprinted.”

Laverty, who played competitive soccer during the winter months, admitted it was a little difficult not running indoor track.

“It was but I decided that it was my last year to play soccer and then I am going to fully commit to run,” she said. “It feels great (to be back). I love it.”

Lincoln had three individual winners in the meet. Taylor Flaxington took the pole vault with a height of 9-6, Marissa D’Amelio won the 300 hurdles at 53.2 and freshman Christin Redding sizzled to a time of 27.5 in the 200.

“It’s obviously the first meet of the season and you don’t want them to do too many events so we limited the events that the kids did,” Lincoln coach John Menna said. ”They did exceptionally well.” The girls have an outstanding sprint team. We are looking for some good things from them.”

In other meets around the state: