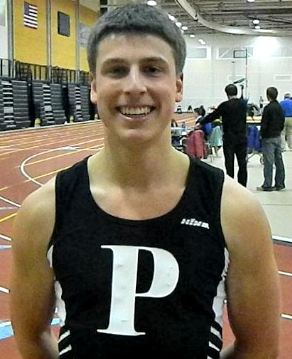 With the state meet just four days away some of the bigger-name athletes such as Cumberland High distance ace Trevor Crawley and Chariho Regional middle-distance star Bryce Kelley were nowhere to be found inside the Providence Career and Technical Academy field house, utilizing the day for some last-minute preparation on their hometown tracks.

Bishop Hendricken coach Jim Doyle, whose squad is among the favorites to snare the team crown at this Saturday’s championship meet, held back on his horses in the Class A meet. But it didn’t stop his Hawks from running away with their 20th straight title.

Hendricken had just one individual victory, but its depth proved beneficial in a 102-59 victory over second-place La Salle Academy.

“We had a team that had a chance to win the Class A Championship so we put almost everybody in at least one event,” Doyle said. “We kind of told everybody to hold back as much as you can, just race the race and see what happens. That doesn’t always work, but it kind of worked out alright.”

Senior Connor Doyle was the lone victor for the Hawks, coasting to a time of 9 minutes, 19.7 seconds in the 3,000-meter run. Hendricken also had an impressive 2-3-5 finish in the 1,500 with junior Colin Tierney taking runner-up honors with a time of 4:12.0 and sophomore teammate Michael Potter recording the same time for third. Senior Tyler Henseler was fifth at 4:15.3.

The race was won by North Kingstown junior Dallin Smith in 4:11.2.

“I was impressed with Michael (Potter’s) performance,” Doyle stated. “He has been struggling lately. That was a great performance by him.”

The Hendricken coach also singled out the all-around effort of sophomore Lee Moses. Moses was second in the 55 dash with a 6.6 clocking, matching the time of overall winner Ryan Williams of East Providence. The talented tenth-grader also placed second in the long jump at 21 feet, 2 inches and ran a leg on the Hawks’ second-place 4x200 relay squad, which combined for a time of 1:36.5.

Coventry senior Lawrence Warwick went home with two gold medals. The top-ranked high jumper in the state captured his specialty with a leap of 6-2. He also rose to the No. 1 ranking in the long jump by setting a meet record with a distance of 22-1 ½.  The Knotty Oakers also had a win from senior Aaron Comery in the shot put with a heave of 54-2 ½.

North Kingstown junior Zachery Emrich never relinquished the lead from the start to blaze to a winning time of 2:35.5 in the 1,000.

As a team, Central finished third among the 13 schools with 56 points and North Kingstown was fourth with 40 points. 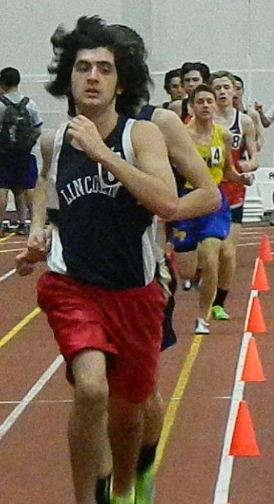 Despite the relatively easy win, Doyle doesn’t feel his Hawks should be considered the favorite for the championship plaque.

“I think there are probably several teams that have a chance to win the state championship,” he said. “I think it’s going to be a very close state championship. I think it’s going to come down to what teams perform the best. North Kingstown is very much in it. I think Classical has a great team that can win it. I believe La Salle with their distance runners - they have an outstanding young team - they have an outside chance to win it. Central has some interesting points, too, with the weights, which is unusual.”

Barrington and Classical staged a nail-biter in the Class B meet. Highlighted by another strong performance from senior Charlie Ionata in the weight throw the Eagles slipped by the Purple, 112-103.

Ionata, who is ranked No. 2 nationally, set a meet record by more than a foot with his toss of 75-5 ¼. Sophomore teammate Adam Kelly was second at 70-9.

The Wake Forest-bound Ionata has been consistently unleashing throws in the 70-plus foot range. His best this season is 78-8 ¾, a substantial six-feet further than Central’s Mangum, his closest pursuer.

“Up until the last outdoor season I wasn't really the top anything. Then I did really well outdoor, worked really hard and over the summer, too,” said Ionata, who was also second in the shot put (48-4 ½). “Everything changed and this year I was able to put it out there. I put in the time, all summer I was in the gym. I had a personal trainer. I was throwing every day. Everything is just paying off now.”

After his standout thrower placed ninth at the indoor states last year, Barrington weight coach Bob Gourley saw a noticeable change in Ionata this past spring.

“I think a lot of it was because some of the training methods we have been using,” Gourley said. “In outdoor, he made a huge jump (in the hammer) from 169-11 as a sophomore to 216 feet last year as a junior. That's when he made his break, last spring, and that's carried over into the weight throw this year and he just has a really strong work ethic.” 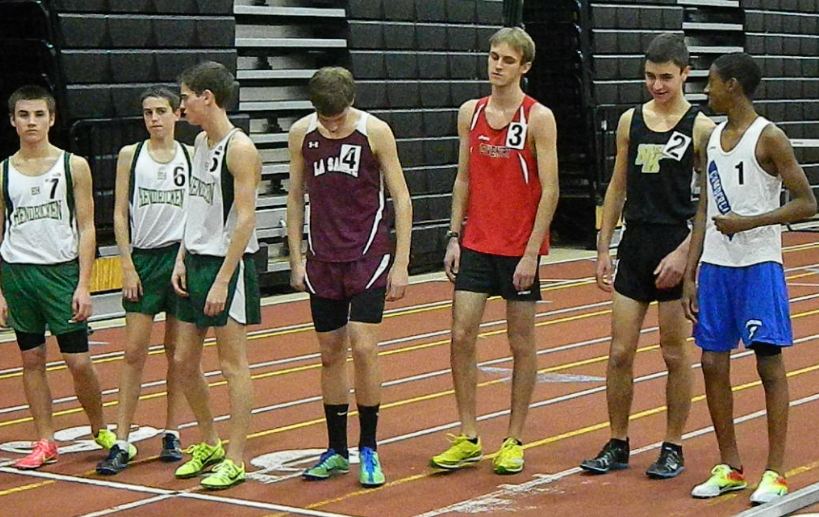 "It’s been a pretty good season so far,” Croft said. “I have worked really hard and it’s paid off, especially in the 55. I was never really a good 55 runner. The 200 (meters) is more my main event.”

Rogers edged East Greenwich, 75-73, to earn the Class C title.  The Vikings won both weight events with junior Joseph Mattson taking the 25-pounder with a distance of 52-3 ¾ and junior Grady Bolan topping his competition in the shot put with a toss of 36-10 ¾.

In the 1,500, Jan Michael Richter took control in the closing laps to breeze to a three-second win, crossing the line at 4:16.9.