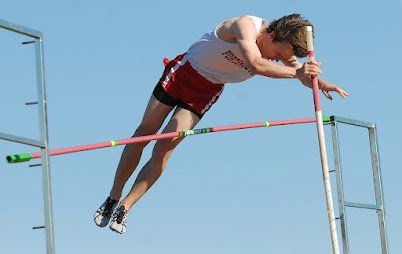 On July 6th at the USATF Junior Olympic Regional Championships held in Uniondale N.Y. Nick Tyler broke the Rhode Island decathlon state record.  The Decathlon is not competed at the Rhode Island State Meet or at any equivalent (Massachusetts has a state wide competition after their “all-state” meet).  In order to compete in this event, Rhode Islanders much seek out other opportunities outside the state. He compiled 4961 points to finish third in the competition.  Nick was nice enough to exchange e-mails with MilesplitRI to discuss breaking the record.

To be honest, I really did not do a whole lot of preparation for the decathlon. It was my first one ever and I hadn't really planned on doing it until about 5 or 6 weeks beforehand. I had trained for pretty much all of the events at some point in my high school career, because I switched events a lot, so I more or less relied on my previous training for the running and vault events. I had never done the throws before so I had my friend Ryan Fletcher help me out with them and basically get me to the point where I wasn't making a fool of myself. Relative to what I was expecting to do, I did best in the throws by far, so I am very thankful for his help.

MilesplitRI: How do you manage competing in multiple events in such a short time? Is there a routine you have between events and even days of competition? What advice would you have regarding meet day preparation?

The time between events actually seems a lot longer than would be expected. I actually did not find myself being particularly rushed at any point or really feeling all that tired from earlier events. I think it's set up in a way that is really conducive to being able to do a lot of events. You don't really have events that use the same muscles back to back and the events like the 400 and the 1500 that can really sap your legs are at the end of both days so those don't affect you that much. I actually felt like I prepared worst for the first event on each day because the earlier events did a good job of warming me up for the later ones.

If there was one thing preparation wise that I think was most important, it was staying hydrated between events. There were a lot of times where I lost track of how much time had passed between the last time I drank and if it hadn't been for Ryan helping me out I probably would have been dehydrated. I would recommend bringing sunscreen unless you want a really awesome singlet tan at the end of the weekend!

MilesplitRI: Which event is your favorite to compete in? Least favorite?

My favorite was definitely the 1500m. I like distance races because you cannot tell yourself afterwards, "ohh I had a bad race", or "I could have done better." It's not like vault or high jump where you can have a really bad day. With distance races, generally speaking, the kind of shape that you are in is exactly reflected in how fast you run. The best runner almost always wins the race and the 2nd best almost always comes in second and so on. Until my senior year I was a distance runner and the only reason that I stopped was because I got pretty good at pole vault.

My least favorite event was absolutely the high jump. I'm awful at it; it isn't fun; and when you do it wrong like I do, it hurts.  It's just not a good feeling running at a bar knowing with 99% confidence that you are going to hit it and then you have to get back up and do the same thing two more times. The fact that most of the competitors haven't come in yet when I get out doesn't help either.

MilesplitRI What are your plans for this coming year? Any specific goals?

This upcoming year I will be attending Northeastern University.  I would really just love to compete for their team this year in either vault or the decathlon.  I'm not so sure how they will react to an average height kid who is built like a distance runner that wants to do the decathlon. I don't really fit the mold for success in the event but we will see. As for the vault I would really like to get over 15' by the end of the first year.

MilesplitRI How would you encourage other athletes to get into the decathlon?

It's definitely cliché to say this but I would say, just do it. Find a meet where they have one, mark it off on the calendar and just start training for it. If you are the type of person who gets way too intense about competition like myself, decathlons are definitely for you. I probably had more fun in the month leading up to the meet than I did the rest of the season just because it broke the monotony of doing the same thing every day. On some days I would go throw, and when I got bored of that, I would walk up to the track and do a quick workout or go for a run, and then if I was feeling up to it I'd head up to Patriot Pole Vault and vault with my club. It's really just a fun thing to do and train for.

On a side note, decathletes are awesome people. I think everyone I met there was willing to help everyone else and we were all joking around and having a great time.

MilesplitRI: Any comment on being the new state record holder?

First and foremost, I give a majority of the credit for this to my vault coach/role model/brother, Arthur. Not only did he coach me in pretty much all the events at some point, but he is the reason I even got started in track and why I took it so seriously instead of just having it be something I did after school. Without him, track would not have happened, my pole vault success would not have happened, and this record does not happen.

As for the actual record, since I started track and field my freshman year I have wanted to be a state record holder. I used to be going for one of the distance records but then Andrew Springer came along and pretty much put an end to that idea. I then started vaulting and I thought I might be able to accomplish it there, but then of course Strawderman put that one out of reach.

When I ran my last high school meet I remember being pretty disappointed even though I kind of saw it coming. Then after I did the decathlon, a few weeks later I got a voicemail from coach Horgan, my high school coach, telling me to call him asap, I think I called him around 12:30am and surprisingly, or not so surprisingly, he picked up and started talking about the record. At first I had no idea what he was talking about but he told me to look at this article and that I got the state record in the decathlon. It was so entirely unexpected that I didn't even know what to say. It wasn't exactly what I had in mind freshman year but I'm really excited it happened.

For more information about the performance, see the RITCA link found here: http://www.ritca.com/news/rhode-islanders-excel-at-junior-olympics/