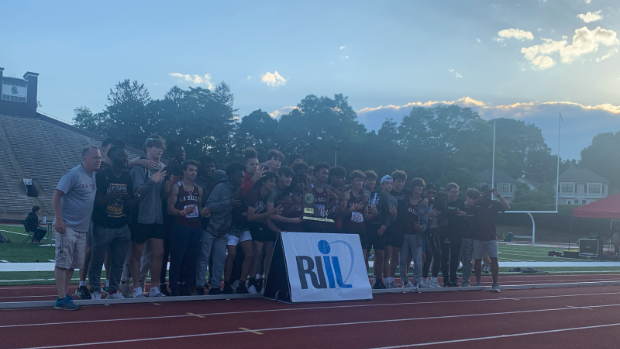 The Rhode Island State Meet is the biggest stage for the best athletes in Rhode Island to push each other to their limits. With States returning to Brown Stadium for the first time since the pandemic began, this change in atmosphere surely helped to produce some of the performance from Saturday. The 19 events produce many phenomenal performances, a few broken records, and a team champion.

To begin with the sprints, La Salle Academy dominated the competition. This was led by the junior sprint duo of Jared Gibbons and Jubril Bamgbala. The two runners scored a combined 40 points in the 100, 200, and 4x100. Jared Gibbons added another individual state title to his collection with his 100-meter victory in 10.85. His teammate Bamgbala took 4th overall in 10.95. In the 200, the two would flip Jubril taking home the title in 21.75, just .28 off the meet record. He blew away his competition with a .63 margin of victory. Gibbons was able to place third in 22.39 while another La Salle runner, junior Chase Gouvin, took 4th out of heat two in a huge PR of 22.49. These three, along with junior Brady Fisher, ran the 4x100 to a season's best and a near meet record of 42.23. This was just .03 off the record, and with all four runners returning next year, the state record of 41.86 is in danger of falling. The previously mentioned 4th leg, Brady Fisher, scored in all four events he contested. He placed 6th in the 110 hurdles, 2nd in the 300 hurdles, and 5th in the high jump. The four legs of La Salle's 4x100 scored a combined 55 of La Salle's 79 points.

Bishop Hendricken also had a successful day in the sprints. Senior Kamalie Pemberton placed 2nd in 10.9 in the 100, and teammate Xavier Wilkens placed 6th in the 200 in 22.67. They also finished runner-up in the 4x100 with a 42.68. This barely missed their school record, but similar to La Salle, return three of their four legs next year.

Denzel Young of Mount Pleasant was one individual who had a great day scoring a combined 24 points. He began the day placing 3rd in the 100 in a PR of 10.95. He followed this up with a 400-meter title in 50.74 and finished the day with a runner-up finish in the 200 with a 22.38. Denzel Young shares a last name with former sprint great Bobby Young of Mount Pleasant. He boasted PRs of 47.41 in the 400 and a state record of 21.17 in the 200. Although it is not known if there is any relation, the Young's of Mount Pleasant continue to produce on the highest stage for the school. He scored all of his team's points as they finished 11th overall.

In the hurdles, North Smithfield owns the events. They placed 3 hurdlers in the 110 final, and another two in the 300 hurdles. In the 110 prelims, both Matthew Stamatelatos and Ray Marsella of NS finished first in their heats. Going into the final, both runners got out hard and separated themselves from their competition in the final hurdles. Stamatelatos took the win in 14.98 while Marsella finished runner-up in 15.09. Both athletes celebrated with each other as they saw the sub 15 mark, and realized they went 1-2 scoring 18 points for the Northmen. They later said that this had been their goal for the last four years, and on their last try they were able to do it. Teammate Aidan Bienvenue took 6th to score 19 points for North Smithfield in the event. In the 300 hurdles, Stamatelatos was up again, and dominated, winning by over a second in 39.34. Behind Stamatelatos, was Fisher of La Salle, Ethan Knight of Barrington, and Bishop Hendricken's Jacob Naiefeh and Hayden Clare. Knight had a great day taking home two third-place finishes in the 110 and 300 hurdles as just a sophomore.

In the relays, La Salle would have trouble finding themselves DQ'd from both the 4x800 and 4x400 due to passing outside the track and a zone violation. This cost the team a combined 16 points. The 4x800 storyline was the beginning of Devan Kipyego's heroics. He got the baton well out of first place for Saint Raphael's. He dropped a blistering first lap to reconnect with La Salle and Smithfield who had traded off the lead the entire race. Smithfield had Elijah Saddliemire on anchor while La Salle had Blake Santos. Santos held a few second lead on the final leg but faced Saddlemire and Kipyego both boasted fast PRs of 1:56 and 2:28 1k respectively. With 250 to go, Kipyego took the lead and kicked away from the competition followed by Saddlemire. Kipyego dropped a 1:53.7 anchor leg while Saddlemire dropped a 1:56 anchor. Kipyego began his bid for the quadruple, with the 1500, 800, and 3000 to go. The 4x400 saw Classical win after La Salle was Dq'd. Their 3:29.95 was partially thanks to Javier Gomez of La Salle dropping a blistering 50.1 anchor to take the win. Kaden Kluth anchored Portsmouth to a runner-up finish while North Kingstown held on to take 3rd with both schools running in the 3:31's. However, La Salle was able to bring home the 4x100 in 42.23. This was ahead of Hendricken and Barrington in second and third.

While sprinting events are often the most popular at a track meet, the story of the distance events made them the most compelling of the meet. Devan Kipyego attempted to complete a feat that greats like Andrew Springer or DJ Principe did not fully complete, winning the 4x800, 1500, 800, and 3000. With the 4x800 out of the way, Kipyego set his sights on the 1500. La Salle's Adam Thibodeau took pacing duties for much of the race before in the final laps it became a kickers race. Kipyego, defending outdoor champion Antonio Capalbo of South Kingstown, and Evan McGregor of Bishop Hendricken kicked to the finish with Kipyego winning with a 3:57.88 and a last-lap of 58.41. Capalbo finished in 3:58.31 and a 58.68 lap, and Mcgregor took 3rd in 3:59.95.

Next was the 800, where Kipyego faced his toughest challenge yet, Kaden Kluth of Portsmouth. This event was the only one he did not own the top mark in the state. He bested Kluth twice indoors in the 1500 and 1000, but outdoors Kluth would face Kipyego on his third race of the day. I picked this to be the race of the day, and it did not disappoint. Kluth took the leaders out in 55.52 with Kipyego close behind. Kipyego closed on Kluth in the final 100 to take the win in 1:51.32, negative splitting the race. Kluth ran a PR of 1:51.49, and both runners went under the old meet record of 1:52.17 held by Kipyego's brother and current Iowa State freshmen Darius Kipyego. With a performance like that, the younger Kipyego could challenge his brother's 800 state record next year. La Salle's Lachlan Bishop took 3rd in a PR of 1:54.16 while Mcgregor took 4th, Saddlemire 5th, and Jake Serra of Westerly in 6th.

Kipyego's final event of the day was the 3000, where he faced many fresh runners hoping to take advantage of Kipyego's tired legs. These included Classical's Cooper Michaud, East Greenwich's Jacob Connolly, and Henry Dennen of Cumberland. Dennen specifically made the race honest from the gun. An opening 400 of 65, 800 of 2:14, and 1k of 2:49.88 strung the field out from the gun. Kipyego held off and caught up to Dennen in the middle stages of the race. It looked like Kipyego would have a chance to pull off the quadruple. However, Dennen saved one last surge during the last lap and dropped a 64.06 final lap to take home his first state title. Kipyego settled for second with an 8:40.64. Although Kipyego missed his goal of winning 4 state titles, he had one of, if not the, greeted performances at a Rhode Island State meet scoring 38 points for his team to help them finish 3rd behind Bishop Hendricken and La Salle. Brandon Piedade of Barrington, Michaud of Classical, Connolly of Barrington, and Troy Silvestri of Hendricken rounded out the top 6. A total of 12 runners broke 9 in the race.

In the throws, Tarik Robinson-O'Hagan dominated. He took home three state titles, one personal best, one meet record, and one US top 10 all-time. In the shot put, he broke his own meet record with a throw of 64-08.25, more than 8 feet ahead of Ryan Hazard of South Kingstown in second place. In the hammer, Robinson-O'Hagan threw for a new personal best, and a US #7 all-time 249-05. He was just a foot and 5 inches off the meet record and under 4 feet off the state record held by Jacob Freeman of Classical. He beat out Barrington's Asher Robbins and Christian Toro of Lincoln who threw 218-08 and 218-02 respectively. The Javelin saw La Salle net more points thanks to the 1-3 punch of Maxwell Cute and Parker Rush took home 16 points for the Rams. Cute PR'd by 18 feet to throw 198-10, and Rush by 12 feet to throw 188-2.

In the jumps, Marquis Buchanan of Classical took home two state titles in the high and long jump. He jumped a PR of 6-4 to beat North Smithfield's Nick Lamoureux on a tiebreaker while Jaden Saunders of Smithfield took 3rd in 6-2. Buchanan then finished 1st in the long jump with a mark of 21-9.5 coming in his final attempt. He said although he did not PR, he did enough to take home the win and he was very happy with the result. Ethan McCann-Carter of Saint Raphel's, who also took 6th in the high jump, took 2nd in the long jump with a 21-8.25. Salter Arms of Moses Brown jumped 21-7.25 for third. Ethan McCann-Carter, in his third event of the day, took home the triple jump state title in 43-9.5. He beat out Saunders who was second in 42-10.5 and who also took 5th in the long jump. Bishop Hendricken took 3rd-6th place with 13 points for the Hawks led by freshman Nae'shaun Montgomery. Finally, in the pole vault, Alex DeStefano of Cumberland took the win in 13-0. He passed to 12 feet where only Barrington's Ben Hill was still competing. From there, he cleared 12-0, 12-6, and 13-0, but could not surpass 13-6.

In the team battle, it was a private school sweep of the podium. Kipyego's Saint Raphael's finished 3rd with 57 points. Bishop Hendricken took runner-up honors with 66 points, and La Salle, despite their troubles in the relays, took home the win with 79 points. Barrington finished as the top public school with 52 points.